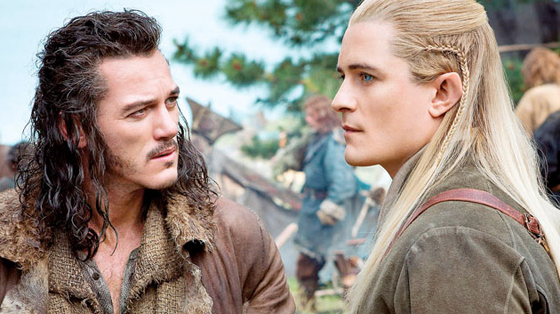 Warner Brothers enjoyed a record-setting year in 2013 as the #1 studio in International Marketshare with a gross of $3.14 billion. The overseas performance set a new record for the studio, breaking the prior record of $2.93 billion set in 2010.

The 2013 Calendar Year Totals for WB's top films are:


The Hobbit: An Unexpected Journey

The full press release from Warner Brothers is pasted below:

The Studio took in an estimated combined global box office gross of $5.035 billion, setting a new Warner Bros. benchmark and becoming only the second studio ever to cross the $5 billion threshold. It also marked the fifth consecutive year Warner Bros. has surpassed $4 billion worldwide, which is an industry record. Globally, the Studio has now ranked #1 or #2 in nine of the past ten years, also an industry record.

Warner Bros. Pictures has crossed the $1 billion mark, both domestically and internationally, 13 years in a row, another industry record. The Studio took in an estimated $1.895 billion at the domestic box office, with eight films crossing $100 million, including three that went on to gross more than $200 million. At the international box office, Warner Bros. set a new Studio record of $3.14 billion, marking the fourth consecutive year—and the sixth year overall—that it has earned more than $2 billion. Ten Warner Bros. releases earned more than $100 million internationally, of which seven grossed more than $200 million—both unprecedented achievements for the Studio. In addition, two of those films took in more than $300 million, and two more crossed the $400 million mark.

Fellman stated, “We are extremely proud of all the remarkable benchmarks reached in 2013. These terrific numbers speak to the diversity of our slate, which has enabled us to deliver great entertainment to a broad range of audiences throughout the year.”

Moving into 2014, the Studio’s First Quarter titles include “Her,” presently in limited release and due out wide on January 10; “The LEGO Movie,” in partnership with Village Roadshow Pictures, slated for February 7; “Winter’s Tale,” also with Village Roadshow Pictures, on February 14; and Warner Bros. Pictures’ and Legendary Pictures’ “300: Rise of an Empire,” due out March 7.

“This incredible achievement is a testament to not only the consistent quality of filmmaking at our studio, but also the creativity and hard work of our teams here and around the world,” Kwan Vandenberg said. “They continue to reach for greater possibilities in a growing and changing international marketplace.”

Kroll added, “We share these remarkable results with our partners at New Line, Village Roadshow, Legendary and MGM. We also thank and congratulate the extraordinary talents behind our films, whose commitment has been an important part of our efforts on each release.”

Two current hits, still in theatres, are among the Studio’s highest-grossing films for the year: “The Hobbit: The Desolation of Smaug,” in partnership with New Line Cinema and Metro- Goldwyn-Mayer Pictures (MGM), at $659 million worldwide and counting; and “Gravity,” at $663 million to date. The Summer blockbuster “Man of Steel,” from Warner Bros. Pictures and Legendary Pictures, was the Studio’s top-grossing release for the year, at $668 million globally. Among the other worldwide box office highlights for 2013 are: “Warner Bros. Pictures and Legendary Pictures Pacific Rim,” with $411 million; “The Hangover Part III,” also in partnership with Legendary, at $362 million; “The Great Gatsby,” in partnership with Village Roadshow Pictures, at $351 million; New Line Cinema’s “The Conjuring,” with $318 million; and “We’re the Millers,” also from New Line, at $270 million.