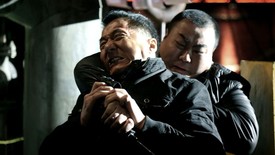 Jackie Chan continues to rule the Chinese box office. Police Story 2013 retained the top spot in its second week with a $26.82 million take, registering over 4.1 million admissions throughout its 157,969 showings in the country. The action film has grossed a total of $72.31 million through two weeks in release.

Personal Tailor reached a major milestone in its third week after crossing the $100 million mark. Xiaogang Feng's film took in $18.52 million in its third week, reporting a $106.68 million cume. The film registered over 3.1 million admissions from 121,449 showings.

Romantic comedy Up in the Wind was the most successful of the week's new releases. A $9.37 million six-day debut puts the film in third place on the weekly top ten chart. Up in the Wind is followed by disaster flick As the Light Goes Out, which earned $5.44 million in its weekend opening. Legendary: Tomb of the Dragon rounds out the top half of the cahrt with a $4.65 million take from its first days of release.

Olympus Has Fallen completed its first full week of release with $4.55 million, bringing the action film to a $5.82 million cume in China. Mortal Instruments: City of Bones adds China to its long list of disappointing markets after taking $2.56 million in its opening weekend. 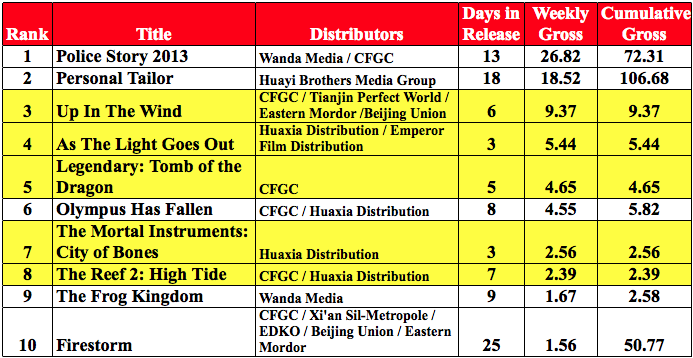