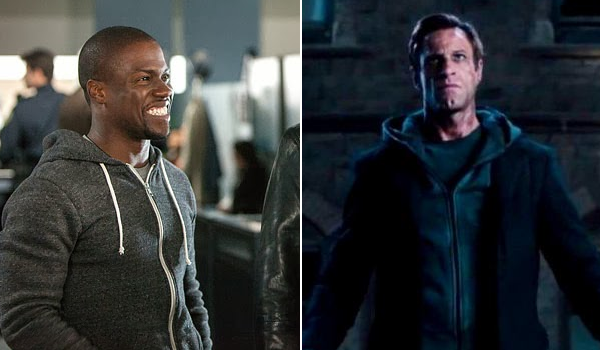 Sunday Update: Universal's Ride Along easily remained in first place this weekend with an estimated $21.2 million. While the break-out comedy starring Kevin Hart and Ice Cube was down a sizable 49 percent from last weekend's three-day frame, some front-loading was to be expected given the strength of last weekend's debut thanks to the rush out of Hart's growing fanbase. In the bigger picture, Ride Along continues to perform especially well based on pre-release expectations and its modest cost. With a ten-day start of $75.45 million, Ride Along is currently running 24 percent ahead of the $60.74 million ten-day take of 2010's The Book of Eli (which fell 52 percent in its second weekend to gross $15.73 million).

This weekend's only new wide release, Lionsgate's I, Frankenstein, debuted all the way down in sixth place with a very disappointing estimated $8.28 million. That was well below expectations and represented a poor start given the film's cost and that late January is usually a good time of year to launch genre fare. While direct competition was clearly a factor in the film's poor start, at the end of the day moviegoers simply weren't drawn in by the marketing of I, Frankenstein (which also had the added advantages of playing in 3D and IMAX formats). I, Frankenstein opened 53 percent softer than the $17.50 million start of Legion back in January of 2010.

The audience breakdown for I, Frankenstein skewed heavily towards both male moviegoers (62 percent) and moviegoers over the age of 25 (60 percent). The film received a B rating on CinemaScore and did register a respectable estimated opening weekend to Friday ratio of 2.95 to 1 (after opening with just $2.81 million on Friday).  Regardless, I, Frankenstein is very likely to fade away from theatres quickly.

Universal's Lone Survivor claimed second place with an estimated $12.6 million. The Peter Berg directed war film starring Mark Wahlberg was down 43 percent from last weekend, which represented a respectable weekend hold. Lone Survivor has grossed a strong $93.61 million after 17 days of wide release and is quickly closing in on reaching the $100 million domestic milestone. The film will also soon surpass the $95.72 million final domestic gross of 2012's Zero Dark Thirty and is currently running 33 percent ahead of the $70.44 million Zero Dark Thirty had grossed at the same point in its run.

The Nut Job claimed third place this weekend with an estimated $12.32 million and is within shouting distance of Lone Survivor for second. The 3D computer animated film from Open Road was down a solid 37 percent from last weekend. The Nut Job continues to exceed expectations in a big way with a ten-day start of $40.27 million. That places the film 7.5 percent ahead of the $37.46 million ten-day start of 2009's Hotel for Dogs (which fell just 24 percent in its second weekend to gross $12.86 million). Open Road has already scheduled The Nut Job 2 to open on January 15, 2016.

Fellow computer animated family film Frozen held up significantly better this weekend with an estimated fourth place take of $9.04 million. The blockbuster from Disney continues to display tremendous holding power as it was down only 23 percent from last weekend. With a massive total domestic gross of $347.82 million to date, Frozen is now only $20.25 million away from reaching the $368.07 million final gross of Despicable Me 2. Frozen should get an extra boost next weekend from the release of a sing-along version of the film.

Jack Ryan: Shadow Recruit rounded out the weekend's top five with an estimated $8.8 million. Paramount's attempted franchise re-launch starring Chris Pine and Keira Knightley was down 43 percent from last weekend. Jack Ryan: Shadow Recruit has grossed $30.17 million through ten days of release. That is on the very low end of expectations and places the film an underwhelming 10 percent behind the $33.50 million 2012's This Means War had grossed at the same point in its run.

Sony's American Hustle finished in seventh with an estimated $7.1 million. The David O. Russell directed Oscar nominee for Best Picture was down a healthy 28 percent from last weekend and has now grossed $127.04 million to date domestically.

Saturday Update: Lionsgate reports this morning that I, Frankenstein posted $2.82 million in its Friday debut, putting it on course for a weak opening weekend of $7.8 million.

Early word of mouth on the film doesn't appear to be doing it any favors, either. The Flixster user approval/anticipation rating is down to a disastrous 58 percent from nearly 36,000 voters after just one day, while only 6 percent of 34 Rotten Tomatoes critics gave the film a positive grade.

What happened? Quite simply, I, Frankenstein was already the recipient of negative online buzz for months ahead of its release as trailers failed to connect with its target genre fan audience in the way that producers had hoped it would along the lines of the Underworld franchise. Once similarly male-skewing flicks Lone Survivor and Jack Ryan: Shadow Recruit hit the market this month, as well as last week's breakout of Ride Along, the writing was on the wall for the doomed reimagining.

Speaking of last week's top film, Ride Along remained in the top spot on Friday with an estimated $6.3 million. Its 8-day domestic total is an impressive $60.6 million, and BoxOffice projects the Kevin Hart-Ice Cube comedy will total $21.5 million for its sophomore weekend.

Friday Update #2: Sources now say that I, Frankenstein could do as little as $3 million on Friday. That figure would put the film on pace for a weekend around $8.5-9 million.

Check back on Saturday morning for official studio estimates.

Early Friday Update: Sources tell BoxOffice that I, Frankenstein is looking at a soft $4.5 million for Friday, putting it on course for an underwhelming $12-13 million weekend.

Ride Along, meanwhile, is looking at a possible $5.5 million today as it looks to handily hold onto first place this weekend. Expect an $18-20 million weekend based on these early Friday numbers.

Tags: I Frankenstein, Ride Along