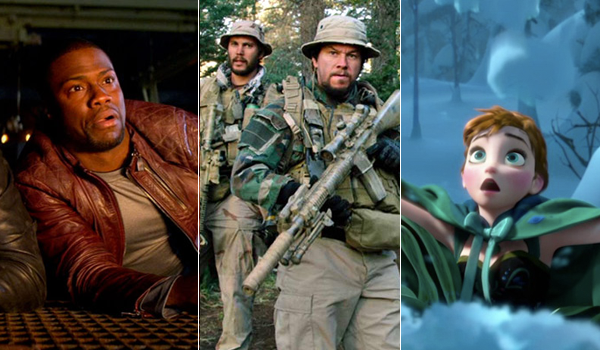 Update: The final January market gross rang in at $892.52 million.

Previously: 2014's box office has kicked off in a very positive way for the industry as January could top $900 million for the first time in four years.

In fact, even when adjusting for inflation, this month has seen higher attendance levels since Avatar was dominating the market four years ago. The estimated number of tickets sold this month is up a projected 8 percent from last year, based on NATO's most recent report that the average ticket price in the final quarter of 2013 reached a record $8.35.

Contributing to this month's success have been two of the three best January openings in history. The popularity of Kevin Hart and veteran Ice Cube helped Universal's Ride Along ($41.5 million) top Cloverfield ($40.1 million) for the three-day January weekend record, as well as the four-day Martin Luther King weekend record ($48.6 million versus $46.2 million, respectively). Not to be forgotten is Lone Survivor, also from Universal, which bagged $37.9 million in its wide expansion earlier in the month. Lone's debut was good enough for the third best ever January opening after Ride Along's record is taken into consideration.

This was the first time since 2009 that more than one film joined the list of top ten January openings. To date, Ride Along has amassed $76.9 million, while Lone Survivor stands at $94.8 million through Monday, January 27. 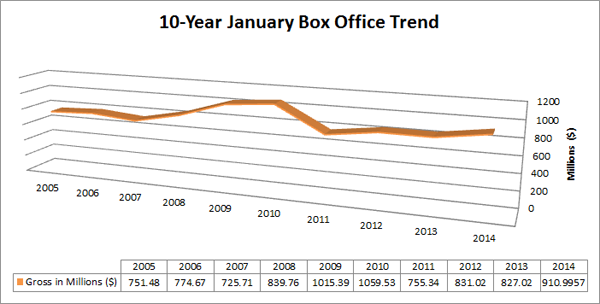 Outside of Universal's headliners, January releases fared modestly as a whole. The Nut Job has performed surprisingly well with $40.7 million through Monday. Behind it are franchise under-performers Jack Ryan: Shadow Recruit ($31.3 million) and Paranormal Activity: The Marked Ones ($32.1 million). The Legend of Hercules ($17.1 million), Devil's Due ($13.1 million), and I, Frankenstein ($9.2 million) represent the month's poorest new releases. These totals are current and exclude projections for the remainder of the month.

Carrying some of the usual post-holiday weight have been various Oscar-nominated films and holdover blockbusters. Disney's Frozen stands out from the bunch with an incredible $85.5 million (projected) over the January 1-27 period, and it's on pace to overtake Despicable Me 2 ($368 million) in February as 2013's highest grossing animated release. Meanwhile, American Hustle and The Wolf of Wall Street have continued to ride their star power and awards buzz. The Hobbit: The Desolation of Smaug rounds out the list of films which will have earned over $50 million this month.

Looking ahead to February, the box office should continue to ring up solid business through the likes of The LEGO Movie, George Clooney's ensemble-driven The Monuments Men, and Liam Neeson's latest action flick, Non-Stop (although its Feb. 28 release means March will carry the most benefit from its release). Kevin Hart's hot streak could also carry over into Valentine's weekend with the About Last Night remake. Underdogs, wild cards, and expected low-level performers of the month include Vampire Academy, the Robocop reboot/remake, Endless Love, Winter's Tale, 3 Days to Kill, Pompeii, Son of God, and Welcome to Yesterday. So long as one or two of those films perform reasonably well, in addition to the aforementioned four coming close to expectations, topping Feburary 2013's 11-year low $616 million market performance shouldn't be difficult.