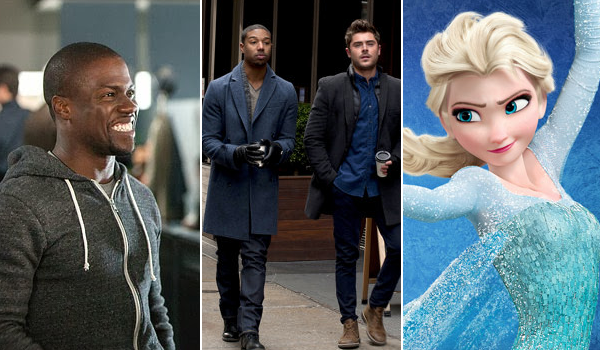 Sunday Update: Universal's Ride Along took in an estimated $12.3 million this weekend to remain in first place for a third consecutive weekend. The break-out comedy starring Kevin Hart and Ice Cube was down 42 percent from last weekend, which represents a very solid hold over Super Bowl weekend. Ride Along continues to exceed expectations with a 17-day take of $92.96 million. That leaves the film just $7.04 million away from becoming the first release of 2014 to reach the $100 million domestic milestone.

Thanks in part to the release of a Sing-A-Long version of the film on Friday, Frozen took second place with an estimated $9.31 million. Disney's 3D computer animated blockbuster was up 2 percent from last weekend, which is an especially impressive hold over Super Bowl weekend. The Sing-A-Long version of the film was responsible for an estimated $2.2 million (23.6 percent) of this weekend's overall gross. Based on that figure, the Sing-A-Long version of the film appears set to help increase the already tremendous holding power displayed by Frozen. Frozen has now grossed a massive $360.01 million to date, which leaves the film just $8.06 million away from surpassing the $368.07 million final gross of Despicable Me 2 to become the third highest grossing release of 2013 domestically.

Focus' That Awkward Moment debuted in third place with an estimated $9.01 million. The low-budget Zac Efron led comedy opened a bit below expectations and may have been limited a bit by its R rating. That Awkward Moment opened an underwhelming 27 percent below the $12.38 million start of 2010's Charlie St. Cloud. The film took in $3.94 million on Friday, fell 5 percent on Saturday to gross $3.75 million and is estimated to fall 65 percent on Super Bowl Sunday to take in $1.31 million. That places the film's estimated opening weekend to Friday ratio at just 2.29 to 1, which is an early sign of front-loading. The audience breakdown for the film skewed heavily towards female moviegoers (64 percent) and towards moviegoers under 25 (61 percent). That Awkward Moment received a respectable B rating on CinemaScore.

The Nut Job placed in fourth with an estimated $7.61 million. The 3D computer animated film from Open Road was down 37 percent from last weekend. The Nut Job will be passing the $50 million domestic mark on Sunday and will have grossed $50.25 million by the end of the weekend. The Nut Job has outpaced expectations nicely thus far, but could lose a lot of steam next weekend with the unleashing of Warner's The LEGO Movie on Friday.

Universal's Lone Survivor placed in fifth this weekend with an estimated $7.2 million. In the process the Peter Berg directed war film starring Mark Wahlberg surpassed the $100 million domestic mark. Lone Survivor has grossed a stronger than expected $104.89 million after 24 days of wide release. The film was down a respectable 44 percent from last weekend, especially when considering that it will likely take a more direct hit from Super Bowl XLVIII on Sunday than most other wide releases.

Paramount's Labor Day debuted in seventh place with an estimated $5.3 million. The Jason Reitman directed drama starring Kate Winslet and Josh Brolin opened towards the lower end of its very modest pre-release expectations. Labor Day did open just ahead of the $5.19 million Revolutionary Road grossed in its first weekend of wide release back in 2009 (albeit from only 1,058 locations, as opposed to 2,584 for Labor Day). Labor Day opened with $1.93 million on Friday, increased 25 percent on Saturday to take in $2.41 million and is estimated to fall 60 percent on Sunday to take in $0.96 million. That places the film's estimated opening weekend to Friday ratio at a so-so 2.75 to 1. Labor Day received a B- rating on CinemaScore. That isn't a promising sign going forward, nor is the film's per-location average of just $2,051 this weekend.

Saturday Update: Universal's Ride Along remained in first place for a fifteenth consecutive day on Friday with an estimated $4.0 million. That was down 37 percent from last Friday and will keep the break-out comedy starring Kevin Hart and Ice Cube in first place for a third consecutive weekend. BoxOffice is currently projecting a weekend take of $12.0 million for Ride Along, which would represent a solid 44 percent decline from last weekend and bring the film's 17-day total to a strong $92.7 million.

Focus' That Awkward Moment debuted in a very close second on Friday with an estimated $3.94 million. However, the Zac Efron led comedy will likely be quite front-loaded towards Friday given the history of Efron's previous films. BoxOffice is currently projecting a second place take of $10.0 million for the weekend. That would be on the lower end of pre-release expectations and 19 percent softer than the $12.38 million debut of 2010's Charlie St. Cloud. Potential for That Awkward Moment appears to have been limited a bit by the film's R rating.

With a boost from the unleashing of a Sing-A-Long version of the film on Friday, Disney's Frozen was up an impressive 10 percent over last Friday to gross an estimated $2.24 million yesterday. Frozen is on pace to place in third with an estimated $9.5 million this weekend. That would represent a 4 percent increase over last weekend and bring the film's domestic total to a massive $360.2 million. The Sing-A-Long version of the film appears set to help increase the already tremendous holding power displayed by Frozen.

Paramount's Labor Day debuted with an estimated $1.93 million on Friday. The Jason Reitman directed drama starring Kate Winslet and Josh Brolin is on pace to land in sixth place for the weekend with a soft $5.5 million. That would be in line with the film's very modest expectations and 6 percent ahead of the $5.19 million Revolutionary Road grossed in its first weekend of wide release back in 2009 (albeit from only 1,058 locations, as opposed to 2,584 for Labor Day).

Friday Update #2: Sources tell BoxOffice That Awkward Moment is looking at a $12 million weekend based on Friday business. The Frozen Sing Along is pacing to land around $10 million, while Labor Day could pull in a $7 million weekend.

That Awkward Moment is similarly targeting young female audiences with the likes of Zac Efron, Miles Teller, and Michael B. Jordan in the R-rated rom-com, although it could potentially draw a higher ratio of date night business on Friday and Saturday.

Should Awkward hold close to Warm Bodies' post-Thursday business trend, it will struggle to top $10 million for the weekend.