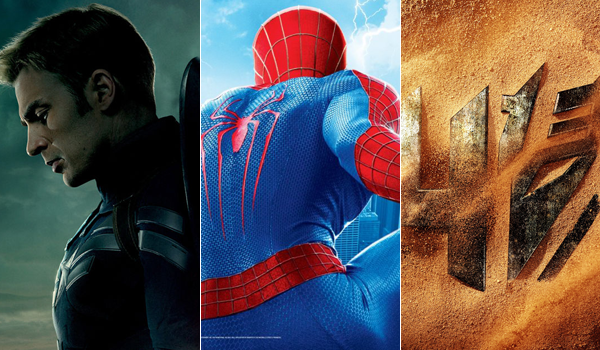 It wasn't much of a game, but movie fans received an idea of what to expect from some of this summer's biggest tentpoles. Without much debate, the discussion belongs to three flicks whose Super Bowl spots generated a veritable frenzy among the online crowd: Captain America: The Winter Soldier, The Amazing Spider-Man 2, and Transformers: Age of Extinction.

The big winner was the Captain America sequel as it posted an incredible 113,388 tweets over the last 48 hours thanks to an action-packed and (well-themed) spot that has fans greatly anticipating its April 4 release. Thanks largely to the so-called "Avengers bump", The Winter Soldier can safely expect to benefit from the same goodwill that Iron Man 3 and Thor: The Dark World did last year. The first Captain pic grossed $176.7 million domestically back in Summer 2011, a figure that Winter Soldier is looking more and more likely to build on with Disney's pre-summer release strategy.

The runner-up of the bunch was June 27's Transformers: Age of Extinction. Paramount revealed its first look at any footage from Michael Bay's fourth franchise entry and fan reactions have been through the roof about some of the initial robot-on-robot set pieces. The sequel's first preview generated 69,811 tweets over the past two days. As we've mentioned before, adding Mark Wahlberg to the cast is a smart play for a series tha needs to give audiences as many reasons as possible to come back for a fourth helping--a crucial turning point at the box office for most franchises.

Age of Extinction's domestic box office prospects are still largely up in the air without a full trailer. Overseas, however, we can safely bet on another massive performer--particularly in China where the film's production set up camp for a significant period of time. The previous film, Dark of the Moon earned $765 million from foreign markets, plus another $352.4 million domestically.

Last but not least, The Amazing Spider-Man 2 has tallied 25,235 tweets since its game ad aired. While not as much of a discussion-driver as the aforementioned releases, that's still a very respectable showing for a series also at a crossroads right now. Fans are divided over what the collection of villains will ultimately mean for the film's narrative, but the franchise's biggest advantages continue to be its a strong appeal to young boys and strong overseas potential (where the previous entry grossed $496 million in addition to its $262 million stateside earnings).

Landing the first "official" weekend of summer with its May 2 debut is another positive mark for the latest Spider-Man, although opening in between The Winter Soldier and May 23's X-Men: Days of Future Past (noticeably, but not surprisingly, absent from the game) puts it in a very interesting position that we'll break down more closely as summer nears.

Box office enthusiasts and comic fans are already chomping at the bit to see which of these high profile tentpoles comes out on top, but in the grand scheme of things, all three are poised for strong global numbers. We'll have more in-depth analysis on these and other upcoming tentpole releases in the days, weeks, and months ahead.