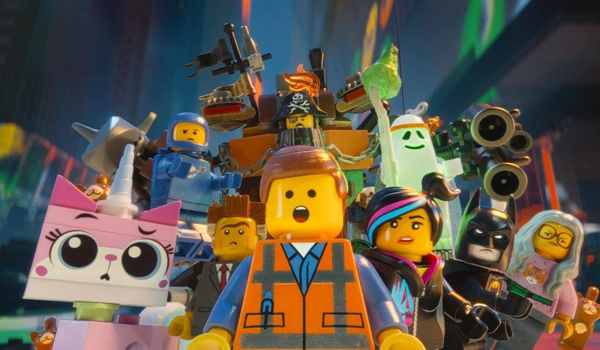 "If you build it, they will come."

That classic line from Field of Dreams echoed on twenty-five years later for Warner Bros. and The LEGO Movie over the weekend. The studio's first animated effort in over two years assembled a spectacular $69.1 million opening frame, considerably higher than most of the industry was expecting.

How did they pull it off?

Founded in Denmark in 1949, the LEGO company has become a generational brand. The block-building line of toys evolved into an immensely broad franchise consisting of video games, retail stores, theme parks serving as popular family destinations, and an impressive line of licensing partners that has expanded the LEGO establishment since 1999. That's when the company began its game-changing relationship with Lucasfilm and Star Wars, still the hottest property on LEGO's list of licensors which includes Harry Potter, The Lord of the Rings, Batman, Toy Story, Spider-Man, Spongebob Squarepants, and many more. The company's global market share has since topped Hasbro and moved closer to that of Mattel.

Then, Hollywood came knocking. Warner Bros. landed the chance to make a LEGO movie happen and wisely worked with the toy company throughout the creative process. The next crucial step was hiring the directing/writing/producing team of Phil Lord and Chris Miller. Their ability to successfully dabble in multiple genres made them a perfect choice for the witty and wondrous world of LEGO. As LAWeekly's Amy Nicholson writes, "In sequel-crazy Hollywood, where corporate partnerships increasingly are calling the shots, Lord and Miller are the best in the business at making creative, intelligent comedies out of pre-existing properties such as Cloudy With a Chance of Meatballs and 21 Jump Street."

Driving themes among enthusiastic critic reviews include an indelible sense of charm expertly blended with adventure and a parent-approved message. That's a winning trifecta in animation that previously drove Despicable Me and Shrek to their blockbuster numbers. The latter franchise especially, through its fortes of pop culture humor, star voice casts, and strong storytelling, excelled in appealing to all ages. LEGO seems to be taking up the mantle.

Also not to be forgotten is the timing of LEGO's blockbusting stature. Disney's Frozen is still going strong nearly three months after release, while Open Road's The Nut Job surprised with its $19.4 million opening in January. There certainly were excuses for a modest jump out of the gate by LEGO, but they turned out to be unnecessary. Only March 2012's The Lorax opened higher (slightly, at $70.2 million) among animated titles released outside of the summer and holiday seasons. LEGO also became the second best February opener in history, only trailing The Passion of the Christ's $83.9 million in 2004.

Budget-wise, the film's estimated $120 million production and marketing costs were less than half of Pixar's Brave ($255 million), and still significantly less than Wreck-It Ralph ($230 million). LEGO's team of builders smartly kept costs down to the reasonable levels previously enjoyed by the Despicable Me flicks, as well as Sony's Hotel Transylvania and Cloudy with a Chance of Meatballs series.

It's likely that LEGO's success will soon be felt. Hollywood has been in need of a way to get audiences into theaters outside the peak summer and holiday seasons. Recent blockbusters like The Hunger Games (March 2012) and Gravity (October 2013) have shone a light on the lucrative potential of well-executed, broadly appealing movies opening during the year's off-peak months.

The takeaways: LEGO has a hugely successful first transition onto the big screen, and Warner Bros. has itself set up with a new animation franchise for the first time in nearly a decade. Don't be shocked if they decide to lock up a February 2017 release date, but from the looks of things, the inevitable sequel could easily compete during any time of year.