'LEGO' Holds On to Top Spot in Brazil 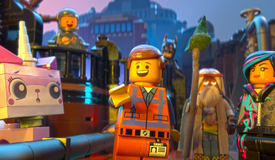 The Lego Movie kept the #1 spot in Brazil after posting a solid $1.5 million hold from 604 screens in its second weekend. The weekend numbers for the animated film are only 21% down from its opening weekend. The Lego Movie has now grossed a total of $3.9 million in Brazil.

Monuments Men opened in Brazil with a $1 million take to finish second in the market. The George Clooney film bumped The Book Thief down to third place, narrowly missing the #2 spot with a $950k weekend in its third frame -a 13% slide from the previous weekend. The Book Thief has grossed a total of $4.2 million in Brazil.

Jack Ryan: Shadow Recruit dropped 37% in its second frame to gross $430k from 256 sites. The spy film has grossed $1.4 million after ten days in Brazil.