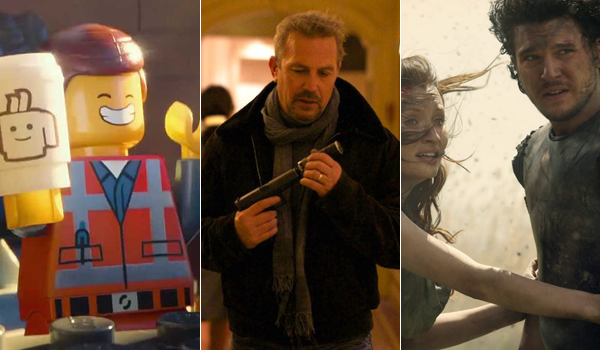 Sunday Update: As was widely expected, The LEGO Movie easily remained in first place this weekend with an estimated $31.45 million. Warner's 3D computer animated blockbuster has led the weekend box office with absolute ease for three consecutive frames. The LEGO Movie was down 37 percent from last weekend, which represented a very solid hold given that last weekend's three-day frame was significantly inflated in general by Valentine's Day falling on a Friday. The film has grossed a very impressive $183.16 million in 17 days, which places it 16 percent ahead of the $158.39 million 17-day take of 2012's The Lorax (which fell 41 percent in its third weekend to gross $22.76 million).

In a slight surprise, Relativity's 3 Days to Kill placed in second this weekend with an estimated $12.3 million. The modestly budgeted action thriller starring Kevin Costner debuted on the high end of pre-release expectations. 3 Days to Kill opened just 20 percent below the $15.45 million recent three-day start of the higher profile Jack Ryan: Shadow Recruit. However, with poor critical reviews, a so-so B rating on CinemaScore and upcoming competition in the next few weeks from Non-Stop, Son of God and 300: Rise of an Empire, it is unlikely that 3 Days to Kill will hold up as well as Jack Ryan has. On a positive note, 3 Days to Kill did generate a very solid estimated opening weekend to Friday ratio of 3.07 to 1 this weekend (after opening with $4.01 million on Friday).

While it wasn't that far behind in grosses, Sony's Pompeii was the far more disappointing of the two wide releases this weekend with an estimated third place start of $10.0 million. The pricey 3D disaster film debuted on the low end of already modest expectations (which had tended to be slightly higher than those for 3 Days to Kill). Pompeii performed very poorly with its price tag in mind, though it should be noted that Sony didn't produce the film or handle its advertising (which was done by FilmDistrict). The opening weekend take of Pompeii came in just ahead of the recent $8.87 million start of The Legend of Hercules. As is the case with 3 Days to Kill, Pompeii also received poor critical reviews, and a so-so B rating on CinemaScore; so the film is unlikely to hold up well going forward either.

Pompeii generated an estimated opening weekend to Friday ratio of 2.96 to 1 (after opening with $3.38 million on Friday). The audience breakdown for the film skewed heavily towards moviegoers 30 years and older (62 percent) and slightly towards male moviegoers (52 percent).

In addition to third place, Sony also claimed spots four through six this weekend. RoboCop placed in fourth with an estimated $9.4 million. The pricey sci-fi action remake was down 57 percent from last weekend's three-day frame, which represented an especially underwhelming hold given that RoboCop received a smaller Valentine's Day boost than most other wide releases last weekend. RoboCop continues to perform a bit softer than expected with a twelve-day take of $43.60 million. That places the film 17 percent behind the $52.72 million twelve-day take of last year's A Good Day to Die Hard.

Sony's The Monuments Men rounded out the weekend's top five with an estimated $8.1 million. The George Clooney directed World War II film was down a sizable 48 percent from last weekend's three-day frame. The Monuments Men surpassed the $50 million mark over the weekend and has now grossed $58.04 million through 17 days of release, as the film continues to perform on the high end of expectations.

Sony's About Last Night landed in sixth place with an estimated $7.4 million. The romantic comedy remake featuring Kevin Hart was down a very sharp 71 percent from last weekend's three-day start. Given this weekend's decline, Valentine's Day was clearly a major driving force in last weekend's strong performance. Despite the sharp decline this weekend, the low-budget film is still having a solid overall run this far with a ten-day start of $38.15 million.

In platform release, Disney's The Wind Rises opened with an estimated $306,000 from 21 locations. That gave the Hayao Miyazaki directed film a per-location average of $14,571 for the frame. In comparison, 2005's Howl's Moving Castle launched with $427,987 from 36 locations for a per-location average of $11,888 in its first weekend of release. The audience breakdown for the film skewed heavily towards moviegoers over the age of 25 (74 percent) and slightly towards male moviegoers (53 percent). Family audiences made up just 16 percent of the film's overall audience. The Wind Rises received an A- rating on CinemaScore and will expand into additional locations this coming Friday.

In other box office news, Lionsgate's The Hunger Games: Catching Fire has now moved into tenth place on the all-time unadjusted domestic box office chart. After grossing an estimated $320,000 this weekend, Catching Fire has grossed a massive $423.63 million to date. That places the film just ahead of the $423.32 million final domestic gross of 2006's Pirates of the Caribbean: Dead Man's Chest.

Saturday Update: Warner Bros. reports that The LEGO Movie earned $7.34 million on Friday, off 43 percent from last week's inflated Valentine's Day and bringing its domestic total up to $159.05 million through 15 days of release. That's 12 percent ahead of the pace of The Lorax as the film handily retains first place for a third straight weekend. BoxOffice projects a $32.5 million third frame for LEGO.

Relativity's 3 Days to Kill pulled $4.01 million for its opening day. By comparison, Jack Ryan: Shadow Recruit banked $5.35 million on opening day while The Family grossed $5.38 million. BoxOffice projects the Kevin Costner thriller will bring in $11.8 million for its debut weekend. With weak critical reviews (25 percent on Rotten Tomatoes currently) and quickly declining word of mouth (61 percent on Flixster entering Saturday), look for 3 Days to drop off quickly in the weeks ahead as Non-Stop and the 300 sequel enter the market competing for action fans.

Pompeii is off to an appropriately disastrous start as it brought in $3.4 million on Friday. BoxOffice projects a $9.6 million frame based off that figure. Pompeii's opening day is in line with the $3.2 million earned by The Legend of Hercules and only slightly ahead of I, Frankenstein's $2.87 million. Reviews are in the cellar at 30 percent on Rotten Tomatoes, while word of mouth is also suffering at 55 percent from the Flixster community. With a large $100+ million production budget, the pressure now rests almost entirely on Pompeii's overseas box office prospects.

Friday Update #2: Sources tell BoxOffice that Pompeii is looking at $4 million for Friday. From there, the film could hit $10 million this weekend.

3 Days to Kill is on track for $3.5 million today and also a close $10 million weekend.

Meanwhile, The LEGO Movie remains number one as expected with a possible $6.5 million Friday. That should net the film a projected $27 million third weekend.

Friday Update #1: Sources tell BoxOffice that 3 Days to Kill earned $325,000 from Thursday evening shows beginning at 10pm. Although not necessarily breakout territory, that puts the Kevin Costner-starring actioner on track for a healthy opening given the film's conservative $28 million production budget. By comparison, Jack Ryan: Shadow Recruit pulled a similar $350,000 from Thursday shows on its way to a $15.5 million three-day weekend ahead of Martin Luther King, Jr. Day last month.