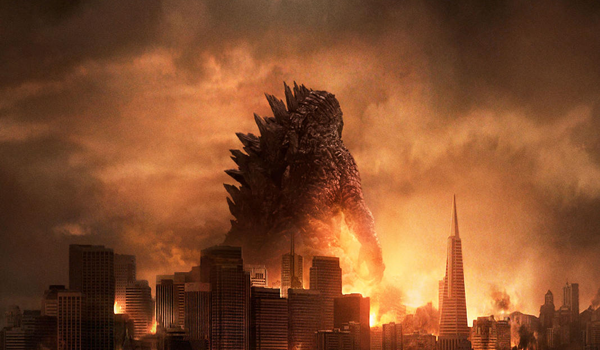 On Tuesday, Warner Bros. debuted the second trailer for Gareth Edwards' Godzilla, and early results are very encouraging for the monster remake.

Set for release on Friday, May 16, Godzilla was responsible for generating 50,217 tweets yesterday. That handily topped the next closest movie (Divergent, 25,890 tweets) for the day and represents a similar amount of Twitter activity as seen by Guardians of the Galaxy when its first trailer debuted last week. As of Wednesday morning, Twitter discussion still more than doubles that of its closest competition.

On Facebook, Godzilla added over 35,000 new fans within 24 hours of the new trailer's launch. The film's official Facebook page has been steadily grabbing new "likes" since the initial teaser trailer debuted over two months ago. Nearly 86 percent of its 458,767 fans (as of early Wednesday morning) have joined since December 10.

Prior to the two sneak peeks, many had wondered how a new version of the iconic Japanese creature could find widespread interest from today's superhero-obsessed audiences--especially after the franchise sputtered out following 1998's much maligned version. The studio is easing those fears as they've mounted what is, so far, the most effective marketing campaign of any Summer 2014 release.

Granted, not many movies have fully revved up their advertising engines yet, but the confidence behind Godzilla's first two trailers and teaser poster have established a benchmark for the upcoming season. For example, slowly revealing only certain views of the titular creature has successfully teased fans and audiences--recalling a similar strategy employed by 2008's Cloverfield.

The ensemble cast is also drawing noticeable attention with the inclusion of veterans Bryan Cranston (TV's Breaking Bad, Argo), Ken Watanabe (Inception, The Last Samurai), and David Strathairn (Good Night, and Good Luck). They back up the film's leads, Aaron Taylor-Johnson (Kick-Ass) and Elizabeth Olsen (Martha Marcy May Marlene)--both of whom are set to appear in next year's Avengers sequel.

As a cautionary tale, mid-May releases aren't typically known for breaking out. That's usually due to the fact that the first weekend of May has produced a $300+ million grossing domestic blockbuster in five out of the last seven years, leaving little room for direct competition targeting similar demographics in the middle of the month.

This time around, Warner Bros. is hoping its monster movie can "pull a Star Trek". That reboot capitalized on a modest May market in 2009 with its release coming one week after X-Men Origins: Wolverine. Godzilla opens one week later on the calendar, but the studio's aim is to garner attention from audiences looking for an alternative to the two superhero movies it opens between (May 2's The Amazing Spider-Man 2 and May 23's X-Men: Days of Future Past). If word of mouth can take off, having Memorial Day weekend as a second frame will pay off very well.

Globally, Godzilla's prospects are even healthier. The brand name and international cast will be sizable selling points (in Asia particularly), while 3D should contribute strongly to the overseas box office in general. With a well-received movie, an international run similar to Pacific Rim's $310 million or World War Z's $337 million isn't far-fetched. The film opens day-and-date in May, meaning it won't have to compete directly with the 2014 World Cup when that quadrennial event begins June 12.

A lot can change between now and then, so as with any other blockbuster hopeful, expectations should remain in perspective for a franchise that is decidedly not guaranteed success after a long hiatus from the big screen. Still, Edwards' Godzilla looks to be cut from a different, more grounded cloth than its 1998 predecessor. Will that be enough to convince moviegoers to show up?