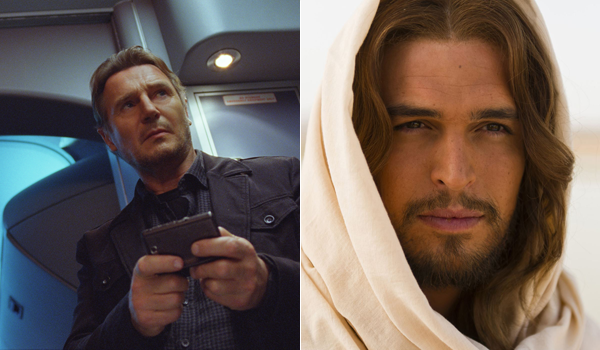 Sunday Update: Universal's Non-Stop was able to hold off Fox's Son of God to claim first place at the box office this weekend. The action thriller starring Liam Neeson outpaced its already lofty expectations with an estimated opening weekend take of $30.0 million. Non-Stop opened 37 percent stronger than the $21.86 million three-day start of 2011's Unknown and represents yet another strong performer for Neeson (who has been a very consistent box office draw in recent years). Following in the footsteps of Lone Survivor and Ride Along, Non-Stop also represents another strong performer for Universal in the first quarter of 2014.

Non-Stop grossed $10.1 million on Friday, increased 23 percent on Saturday to take in $12.4 million and is estimated to fall 39.5 percent on Sunday to take in $7.5 million. That places the film's estimated opening weekend to Friday ratio at a solid 2.97 to 1. The audience breakdown for the film was nearly equally split between genders (female moviegoers represented 51 percent of the film's audience) and skewed heavily towards moviegoers 25 years and older (65 percent). Non-Stop received a promising A- rating on CinemaScore, though the film will also soon face upcoming direct competition from both Warner's 300: Rise of an Empire and Disney's Need for Speed.

Son of God outpaced expectations in a big way this weekend with an estimated second place start of $26.5 million. The biblical epic constructed from The Bible television mini-series was helped by strong group sales among church groups. The film being part of an already released mini-series could have been an obstacle at the theatrical box office, but ultimately that didn't hinder the film's performance. With so few religious films having been released in recent years, there aren't a lot of great box office comparisons for Son of God. However, while very different subject matter, the opening weekend take of Son of God was quite similar to the $24.48 million launch of Act of Valor back in February of 2012.

Son of God grossed $9.40 million on Friday, fell 1.6 percent on Saturday to take in $9.25 million and is estimated to fall just 15 percent on Sunday to gross $7.85 million (being a religious film is expected to help out Sunday's hold). That places the film's estimated opening weekend to Friday ratio at 2.82 to 1, which does indicate some initial front-loading. Son of God received an encouraging A- rating on CinemaScore and will hope to hold up well between now and the Easter holiday.

After leading the box office for each of the previous three weekends, The LEGO Movie fell to third place this weekend with an estimated $21.02 million. In the process, Warner's blockbuster 3D computer animated film surpassed the $200 million domestic milestone this weekend, making it the first release of 2014 to do so. The LEGO Movie was down 33 percent from last weekend, as the film continued to hold up nicely this weekend. With an impressive 24-day take of $209.33 million, The LEGO Movie is currently running 18 percent ahead of the $177.41 million 24-day gross of 2012's The Lorax.

Also holding up well this weekend was Sony's The Monuments Men. The George Clooney directed World War II film was down 37 percent from last weekend to place in fourth with an estimated $5.0 million. The 24-day total gross for The Monuments Men stands at a solid $65.69 million.

Both of last weekend's new wide releases, Relativity's 3 Days to Kill and Sony's Pompeii, were down very sharply this weekend. 3 Days to Kill fell three spots and 60 percent to place in fifth with an estimated $4.9 million, while Pompeii was down four spots and 58 percent to place in seventh with an estimated $4.3 million. Clearly, both films took a big hit from the added presence of both Non-Stop and Son of God in the marketplace. Respective ten-day grosses stand at a respectable $20.70 million for the modestly budgeted 3 Days to Kill and at a disappointing $17.74 million for the pricey Pompeii.

In limited release, Disney's The Wind Rises took in an estimated $1.60 million from 496 locations. That gave the Hayao Miyazaki directed film a so-so per-location average of $3,234 for the frame. In comparison, Ponyo grossed $3.59 million during its first weekend of major release back in 2009 (though that film debuted in 927 locations). The Wind Rises has grossed $2.04 million through ten days of release.

Meanwhile, Son of God is off to an impressive start itself. The pic grossed an estimated $9.4 million yesterday, including its strong $1.2 million Thursday night sales. Although critics haven't taken kindly to the movie (23 percent on Rotten Tomatoes), word of mouth appears healthy with 82 percent on Flixster as churchgoers around the country turn out. BoxOffice is projecting a $29 million weekend for Son of God.

Friday Update #2: Sources tell BoxOffice that Non-Stop is surging in first place today with an early projection of $10.5 million. Should that figure hold, the Liam Neeson thriller will be on pace for an opening weekend north of $30 million.

Son of God is no slouch either, though. Sources report that Friday's take could go as high as $8 million based on early matinee trends and pre-sales. Depending on how front-loaded the film is, that could mean a weekend anywhere between $20-25 million.

Meanwhile, The LEGO Movie continues to do strong business into its fourth weekend. The animated hit is on pace for around $4 million today, giving it a shot at an expected $16 million weekend.

Friday Update: Sources report that Fox's Son of God earned an estimated $1.2 million from Thursday night shows. That's an exceedingly healthy start to the weekend and represents one of the best Thursday night debuts of 2014 so far (trailing only Lone Survivor's $1.5 million). Tracking for the film has been a consistently moving target even up until its release today. Combined with the fact that churches across the country racked up over $4.5 million in pre-sold tickets, some of which were for Thursday night shows, it's too early to tell what last night's figure could translate to for Friday as a whole.

Meanwhile, Non-Stop posted a solid start itself on Thursday night. The Liam Neeson actioner grabbed $720,000 from its early shows, ahead of Olympus Has Fallen ($500,000) and more than doubling the Thursday night performances of 3 Days to Kill ($330,000) and Jack Ryan: Shadow Recruit ($350,000). The figure represented about half of Taken 2's $1.5 million Thursday night start.