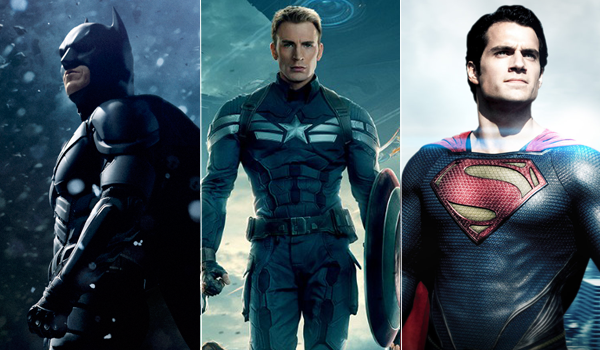 Much has been made of the brewing calendar war between Warner Bros. and Disney regarding their respective comic book properties, the still-untitled Batman/Superman movie and Captain America 3. Both the online community and the movie industry itself are giddy at the prospect of the first bona fide Marvel vs. DC box office war. Some believe Warner should back down, and take-them-with-a-grain-of-salt rumors suggest that perhaps they will.

They don't yet need to, though.

First, the facts: in June 2013, Disney slotted the May 6, 2016 weekend for the release of an "untitled Marvel film". In January, Warner Bros. upped the ante and pushed back their own DC Comics property from July 2015 to the same frame. Last week, the mystery of Marvel's untitled movie was put to rest.

Note: Disney hasn't confirmed the report of Captain America 3 representing that particular "untitled" feature. It is, however, being treated as official.

Assuming the studio is waiting for the right time to acknowledge the Captain America 3 release date, this situation highlights the relatively new practice of studios staking out a release date years in advance without attaching an actual title to it. The trend began with Pixar and DreamWorks mapping out their future animated releases a few years back, and now it's creeping into the comic book movie format. This new standard makes sense from a business perspective, but also demands some scrutiny... and no small amount of patience.

Let's get one thing out of the way: no studio "owns" a weekend. Regardless of Marvel having claimed the date, as well as the fact that a Marvel-related pic has opened that same weekend every year since 2007, it was, for all intents and purposes, a *non-existent* movie which they used to claim it with. Anyone accusing Warner Bros. of having tried to unsuccessfully bully the competition would be wise to remember that. WB had to have known there was a strong chance that Marvel's untitled feature would turn out to be an Iron Man, Thor, or Captain America sequel. It was a calculated risk, and seeing as we know they won't be facing off against Marvel's biggest threats (an Avengers sequel or a would-be Iron Man 4), it's a risk that just might pay off.

Which franchise has the upper hand?

Pushing aside speculation that the date could still be used for another Marvel property, let's break down the pros and cons for both planned May 6, 2016 openers.

Man of Steel, the box office success that it was, had its share of so-so word of mouth. Under ordinary circumstances, that's a major disadvantage for an imminent sequel. Conversely, Captain America: The Winter Soldier is shaping up to be one of Marvel's most well-received entries to-date if early buzz proves accurate. Disney and Marvel may be awaiting the box office returns of next month's sequel before externally committing to Captain 3's release date, but they appear very confident in the solo series right now.

Where does that leave Batman/Superman? Regardless of Man of Steel's reception, let's not miss the forest for the trees: its sequel will see the pairing of, arguably, the two most iconic superheroes (outside of Spider-Man). Their first on-screen meeting probably won't be viewed by audiences as a standard sequel to Man of Steel, much like The Avengers wasn't viewed as one to Thor or Captain America: The First Avenger--two films which performed well, and were generally liked, but gave no indication of how big the ultimate team-up movie would be in 2012. In fact, their box office returns were just under 40 percent lower than Man of Steel's domestically.

A similar lack of correlation could ring true for Batman/Superman, at least on opening weekend. What happens after will depend on the film's inherent qualities (as with any other movie). Furthermore, while the Captain America solo flicks may end up being the next go-to Marvel series with Iron Man's immediate future in question right now, that doesn't mean they'll have the monumental appeal of a movie pitting Superman against Batman on screen for the first time. The moviegoing world will almost undoubtedly see the pairing as an event. In Marvel's defense, however, Warner Bros. has more to lose right now as they attempt to put together a DC Cinematic Universe.

Under the scenario of Batman/Superman (or Captain America 3, for that matter) moving up or back by a single weekend, it would eliminate the head-to-head confrontation, but both films would still undercut each other in the long run. WB knows this from experience as The Dark Knight shortened the box office legs of Hellboy II: The Golden Army (having opened one week earlier) in 2008.

Other options line the table, though. If Marvel doesn't budge on Captain America 3, we can safely bet WB will move to an unclaimed date (such as July 22, the weekend when Christopher Nolan's Dark Knight movies thrived).

Alternatively, if Marvel likes what they see out of The Winter Soldier's performance next month, they could change their tune and slot the third Captain for a similar pre-summer release. Given the short turnaround time presented by a two-year window between Captain sequels, if they're going to move it, a later date in 2016 seems more likely. (FYI: Marvel still has July 8, 2016 booked with another untitled film.)

Ultimately, no one outside the powers-that-be knows the endgame here, and we probably won't for awhile. The only thing to safely assume is that these two films will not open on the same weekend together. It would be financial cannibalism to the utmost degree, and both studios should be keenly aware of that.

More than two years separate us from the weekend battle in question, and history shows that release schedules can (and almost always do) dramatically shift over that kind of time span. This is a near-evenly-matched game of chess being waged by Warner Bros. and Disney, and so far, both have made strategically bold opening moves. How they continue countering each other from here on could set a new tone for how future calendar clashes between any combination of studios play out.