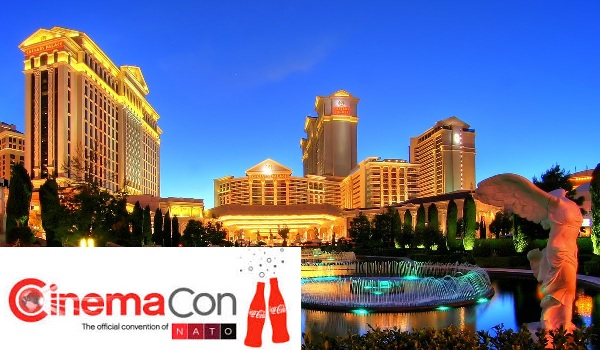 Christopher Nolan took some time off from supervising the editing of Interstellar to join a lunchtime conversation moderated by The Hollywood Reporter's Chief Film Critic Todd McCarthy in front of CinemaCon attendees at Caesars Palace.

Nolan remained tight-lipped on details about Interstellar two days after Paramount's presentation at CinemaCon failed to reveal any new information on the project. The most telling detail he gave away about the plot is already available on the film's IMDB page, "It's about interstellar travel."

The few details the filmmaker did spare suggest that audiences are in store for a visual feast this fall. Nolan's last films have been released over the summer, but Interstellar will be premiering in November in order to accomodate the film's special effects.

"We shot quite a lot of film on IMAX, more than we have ever done in the past," shared the director. "What we're trying to do is give audiences an incredible experience, an immersive experience."

"On this film, the technical aspects of how the film is presented are more important than on any other film I've ever done."

Nolan shared his distate for using temp scores when editing his films, prefering a more organic process with composer and long time collaborator Hans Zimmer. The composer begins his involvement with Nolan's films at the script-stage, receiving a copy of the screenplay to base his score rather than working off an early cut of the film.

Nolan first became interested in working with McConaughey after seeing his potential in Mud, "[The film] showed me a side of Matthew's capabilities that I didn't know were there."

The director has been able to work with some of the most compelling male stars of this generation, including Christian Bale and Leonardo Di Caprio. Nolan considers himself very lucky to have been able to work with such strong actors. "The odds that someone I've worked with will win [an Oscar] are pretty good, about three-out-of-five," he joked.

Nolan didn't shy away from remaining a staunch supporter of 35mm, even when speaking to a room full of exhibitors and technology providers. "Film is the best way to capture an image," insisted the filmmaker.

"There are realities people aren't willing to accept in the drive to make things cheaper," he later added.

Despite his commitment with 35mm, Nolan emphasized that innovation remains central to the cinema-going experience. If Nolan is hesitant to go digital, it is only because he's asking for better quality from the images -a mission at the heart of every technology company in today's market.

The director has also avoided working in 3D, albeit for slightly different reasons. Nolan doesn't view 3D as the best format for a shared audience experience. He did, however, mention The Great Gatsby as a film that he believes succeeded on 3D. "My resistance of 3D is mostly based on what's right for the films that I'm trying to make," explained Nolan.

Nolan cites watching the original release of Star Wars as a kid as a big influence on his focus on visual spectacle. He also brought up the influence of Stanley Kubrick's 2001: A Space Odyssey after seeing it on the big screen during the film's theatrical re-release.

On working with his brother, screenwriter Jonathan Nolan:

The siblings take different approaches to collaborating on every project. Christopher adaptated Jonathan's short story for Memento himself into a screenplay. Jonathan adapted the source novel for The Prestige over a span of three to four years. The Batman trilogy brought a more collaborative process, where the brothers would bounce drafts back and forth between each other. Interstellar is a film that Jonathan had been working on for some time before Christopher joined the project.

Nolan doesn't have any other film ideas floating around in his head as he is working on a project. The director instead prefers to focus completely on the task at hand, a work ethic that was present during the production of Batman Begins. Nolan tackles each of his current films as the last film he'll ever do, "It's a bit like eating a fantastic dinner and someone asking you what you want for breakfast in the morning."