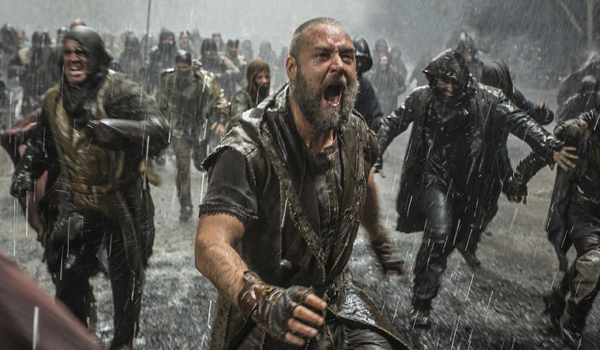 Sunday Update: Paramount's Noah landed comfortably in first place this weekend with an estimated $44.0 million. The Darren Aronofsky directed biblical epic starring Russell Crowe exceeded its already lofty pre-release expectations this weekend. A strong marketing campaign, mostly good critical reviews and the recent resurgence in faith themed films all aided Noah this weekend. Noah may have also received a bit of a boost from moviegoers who wanted to catch the film before Disney's Captain America: The Winter Soldier enters the marketplace this coming Friday. Without adjusting for ticket price inflation, Noah delivered the 13th largest opening weekend performance ever for the month of March. Compared to other recent films, Noah opened nearly on par with the $45.04 million debut of 300: Rise of an Empire (despite not having the advantage of higher priced 3D tickets that Rise of an Empire had) and 72 percent stronger than the $25.60 million start of Son of God.

Noah opened with $15.19 million on Friday (which included an estimated $1.6 million from late night shows on Thursday), increased 16 percent on Saturday to take in $17.61 million and is estimated to decline 36 percent on Sunday to take in $11.21 million. That places the film's estimated opening weekend to Friday ratio at a very solid 2.90 to 1. The audience breakdown for the film was evenly split between female and male moviegoers and skewed heavily towards moviegoers 25 and over (74 percent). Noah received a lackluster C rating on CinemaScore, which signals that the film is dividing audiences and could point towards potential front-loading.

Lionsgate's Divergent fell one spot to place in second with an estimated $26.5 million. The young adult adaptation starring Shailene Woodley was down 51 percent from last weekend, which represents a relatively strong second weekend hold for a young adult adaptation. In comparison, 2008's Twilight fell 62 percent in its second weekend to gross $26.34 million, while last year's Ender's Game fell 62 percent to gross $10.26 million. Divergent has grossed a healthy $95.26 million through ten days of release. That places the film 20 percent behind the $119.71 million ten-day start of Twilight and 116.5 percent ahead of the $44.01 million ten-day take of Ender's Game. This weekend's hold strongly suggests that Divergent is helping greatly expand the already existing fanbase for the Divergent property as a whole.

God's Not Dead held up very well upon expanding this weekend. The faith-based drama from Freestyle and Pure Flix placed in fifth with an estimated $9.08 million from 1,178 locations. That gave God's Not Dead a healthy per-location average of $7,704 for the frame and represented a very slim decline of 2 percent from last weekend. This weekend's hold was especially impressive given the added presence of Noah in the marketplace. God's Not Dead continues to exceed expectations with $22.03 million in ten days. That places the film 36 percent ahead of the $16.16 million ten-day take of 2011's Courageous.

Fox Searchlight's The Grand Budapest Hotel also performed well upon expanding into wider release this weekend. The Wes Anderson directed film placed in sixth with an estimated $8.83 million from 977 locations. That represented a 30 percent increase over last weekend and gave the film a per-location average of $9,033 for the frame. The Grand Budapest Hotel has grossed an impressive $24.46 million through 24 days of release. At this rate, it shouldn't be all that long before The Grand Budapest Hotel surpasses the $45.51 million final gross of 2012's Moonrise Kingdom.

The news was nowhere near as good for Open Road's Sabotage. The action film starring Arnold Schwarzenegger opened a bit below its already modest expectations with a seventh place start of just $5.33 million. Schwarzenegger simply hasn't been a draw at the box office since returning to the big screen last year. Sabotage only furthers the trend, as the film debuted under the respective $9.89 million and $6.28 million openings of last year's Escape Plan and The Last Stand. Sabotage did receive a solid B rating on CinemaScore, but that won't mean much going forward after this weekend's soft start.

In moderate release, neither Lionsgate's Cesar Chavez nor Focus' Bad Words lit up the box office this weekend. Pantelion Films release Cesar Chavez took in an estimated $3.00 million from 664 locations (for a respectable per-location average of $4,518). Bad Words only managed an estimated $2.65 million from 842 locations (for a so-so per-location average of $3,141) and has now grossed $3.56 million to date. Potential for both films was ultimately limited in part by the strong performance of Noah this weekend, while Bad Words has also suffered from taking a clear back seat to The Grand Budapest Hotel on the platform front.

Saturday Update: Paramount reports that Noah drew $15.24 million on opening day, including Thursday night's $1.6 million start. That puts the film on target for an opening weekend of $43.5 million according to BoxOffice's official projection.

Darren Aronofsky's controversial dramatic adaptation of the Biblical story has seen its fair share of mixed press in recent months, although it appears that the damage was minimal as general audiences rarely pay attention to industry trades enough to be swayed. That being said, long-term prospects are questionable: early word of mouth appears soft with a weak 56 percent Flixster score already one day after release. Critics, however, have been willing to go along for the ride by giving it a 76 percent Rotten Tomatoes score. If the film sparks any debate (and it almost surely will) among audiences after opening day/weekend, legs will be challenging considering the competition coming next week in Captain America: The Winter Soldier. On the plus side, Noah's target audience (adults) could continue showing up out of sheer curiosity.

David Ayer's Sabotage fared poorly on opening day with a $1.825 million haul. That figure falls short of End of Watch ($4.6) and is more in line with Arnold Schwarzenegger's The Last Stand ($2.03 million). BoxOffice projects a $5.5 million weekend for Sabotage. That's a weak start made worse by its 51 percent Flixster audience and 21 percent Rotten Tomatoes scores as of Saturday morning.

Meanwhile, Lionsgate's Cesar Chavez posted $1.02 million from 664 locations on Friday. The drama, starring Michael Pena, should bring in close to $3.5 million in its first weekend.

Friday Update #1: Sources report that Darren Aronofsky's Noah pulled $1.6 million from its Thursday evening domestic launch. That compares favorably against Son of God's $1.2 million Thursday night haul one month ago this weekend and sets Noah up to at least surpass that film's $25.6 million opening weekend.

Check back later today for a report on early Friday numbers.

LOS ANGELES - March 27, 2014 - According to Fandango, the nation's leading moviegoer destination, the Biblical epic "Noah" tops the company's Fanticipation movie buzz indicator this week, gathering a solid 85 out of 100 points -- and outselling "300: Rise of an Empire" at the same point in that film's ticket sales cycle. At the same time, the action-adventure "Divergent" is poised for a strong second weekend, scoring 77 out of 100 Fanticipation points.

"Thanks to widespread curiosity among moviegoers, 'Noah' is building a commanding presence in both social media buzz and ticket sales," says Fandango Chief Correspondent Dave Karger. "These days there's a definite demand to see more Biblical stories presented on the big screen, and director Darren Aronofsky's unique and adventurous take on the saga of Noah's ark is benefiting from that demand."