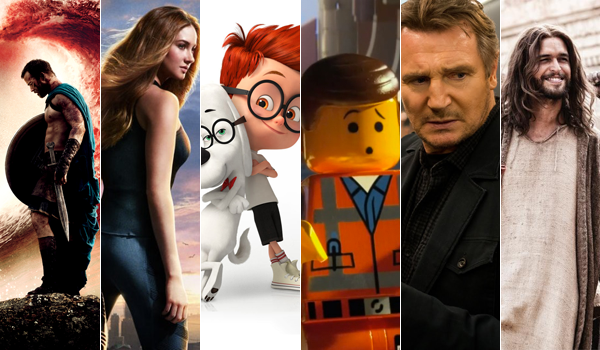 2014's first quarter is in the books, and business for the first three months of the year was up 5.5 percent over the same period in 2013. This year's box office haul stood at $2.396 billion through March 31.

The good news: last month was buoyed by a collection of films rather than the top-heavy March 2013, which was carried by Oz: The Great and Powerful. This time around, 300: Rise of an Empire, Divergent, and Mr. Peabody & Sherman gave March three films topping the $95 million mark. Non-Stop, Son of God, The LEGO Movie's holding power, and Noah's opening weekend also contributed healthy performances. In the end, though, last month was the lowest grossing March since 2011 ($682 million) and fell short of March 2012's record $942 million.

Driving the bulk of the year-to-date improvement was February's $699 million market gross--up 13 percent from February 2013 ($617 million), but it was mostly due to the "awesome" success of The LEGO Movie (which accounted for over one-quarter of the monthly figure). January's $893 million gross also represented the strongest January in four years, when Avatar was enjoying its phenomenal run in early 2010. Key contributors in early 2014 included Frozen's remarkable legs, plus Universal's back-to-back hits in Ride Along and Lone Survivor.

April could be a recovery month for the market, though. Disney/Marvel's Captain America: The Winter Soldier has its eye on becoming one of, if not *the*, top April performer in history while Rio 2 looks to continue the success of its 2011 predecessor. Neither of those films will face direct competition until May (or later, in the case of Rio 2).