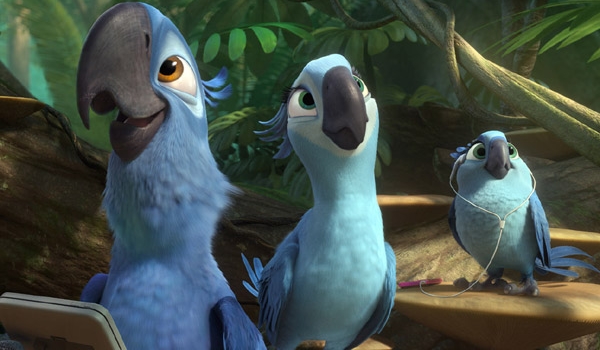 Thursday Morning Update: Rio 2 continued its ascent on Wednesday with a 54% jump to 10,524 tweets, up from Tuesday's 6,814 tweets. By comparison, The LEGO Movie had 18,155 tweets its Wednesday before release, and Peabody And Sherman had 6,126. Two strong holds in a row on release week and favorable comparisons to the last two major family films all point to box office gold here. $40 million looks likely, which would be a shade over the $39 million the first opened to and actually a big win since sequels to animated films can often have trouble even matching the same levels of success. This would appear to be an exception.

Draft Day improved a further 26% on Wednesday to 2,106 tweets, up from 1,677 the day before. By comparison, 3 Days To Kill had just 1,296 its Wednesday before release. There is no denying that there is a sizeable interest in the film this weekend which actually leads us here at Box Office to believe that it can top Oculus for second spot amongst the new openers. Expect $13.5 million for it and Costner's best opening weekend performance as top-liner since Open Range generated $14 million back in August of 2003 (I purposely skipped The Guardian since Ashton Kutcher was a large part of the draw there). Things are looking rosy for Mr. Costner once again in Hollywood.

Oculus recovered on Wednesday to post a 36% gain to 8,465 tweets up from 6,242 tweets on Tuesday. By comparison, Paranormal Activity: The Marked Ones had a similar 8,743 tweets its Wednesday before release. The panic brought on by the drop yesterday has subsided somewhat thanks to this solid increase and it looks like $13 million will be possible. No its not the next Paranormal Activity but with strong reviews it should have solid word of mouth and if its backers are lucky it can translate that into a sequel or five for even bigger returns in the future. Insidious comes to mind as an apt comparison.

Wednesday Morning Update: Rio 2 leapfrogged Oculus on Tuesday as it rose 57% to 6,814 tweets, up from 4,334 tweets on Monday. Strong jump for a family film which has really raised its stock in my eyes. By comparison, The LEGO Movie had 14,586 tweets its Tuesday before release, and Peabody And Sherman had 4,950. Interesting point to note is that both those comparison films saw Monday to Tuesday increases of under 22%, not to belabor the point but things are definitely looking up considering all the signs.

Oculus stumbled a bit on Tuesday as it fell almost 20% to 6,242 tweets, down from Monday's 7,791 tweets. For the horror/supernatural genre a drop as large as this in its release week is usually never a good sign. By comparison, Paranormal Activity: The Marked Ones had 6,320 tweets its Tuesday before release. The numbers are still hefty which is encouraging but I'll be curious to see its returns tomorrow and if they drop again or rise once more. I still think double digits look likely but I'm afraid that there is going to be no breakout beyond that with a drop such as this in play.

Draft Day had a hefty 53% jump to 1,677 tweets, greatly improving on its return of 1,094 tweets from Monday. By comparison, 3 Days To Kill had 1,293 tweets its Tuesday before release. This is another surprisingly strong return, enough so to make teen millions look like more than a possibility.

Tuesday Morning Update: Oculus began the week with 7,791 tweets which was up over 50% from Sunday, giving it top billing amongst this week's crop of new openers. Horrors and supernatural films have a history of generating a ton of buzz on Twitter and tend to have some of the largest tweet to box office dollar ratios. By comparison, Paranormal Activity: The Marked Ones had 5,214 tweets back in January for its Monday before release. This is indeed a promising start for the film as it attempts to tap into the horror demographic, one which has been largely underserved since January. As is the case with most films of the 'Indiewood' genre (i.e low budget feature films born from independent means outside of the major Hollywood studio system) all this really needs is a double digit opening to be a success and this is well on its way towards that goal based on its Monday returns.

Rio 2 finished a ways back on Monday with 4,334 tweets, up just under 40% from its Sunday returns. No its not close to Oculus, but when you consider that it is a family film and they have much less buzz in general, coupled with the fact that the first Rio film had just 593 tweets on its Monday before release you realize that this is actually a roaring start. By comparison, The LEGO Movie had 12,170 tweets its Monday before release while Mr. Peabody And Sherman had 4,081. Based on these two comparisons I'd say $30 million plus is a lock, though I'm not as confident that it has enough gas in the tank to eclipse the $40 million opening of the original.

Coming into the year Kevin Costner had been in three films in six and a half years, but Draft Day will mark his third film in the last three months. It finished way off the pace with 1,094 tweets on the day, and had the smallest increase of the new openers from Sunday of only 30%. It will appeal to primarily an older North American male audience. By comparison, 3 Days To Kill had 785 tweets its Monday before release. Costner has always done well with the sports genre and with this ahead of 3 Days in the early goings it looks very likely that it will see double figures, and maybe even teen millions over the weekend. With a reported budget of $20 million this should allow it to be a profitable feature and no doubt continue the resurgence of Costner. Could he be the next Liam Neeson?