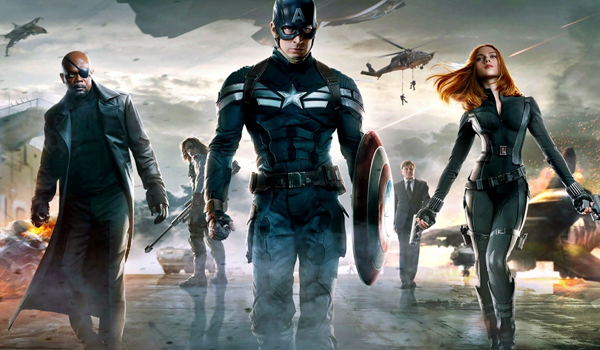 Captain America: The Winter Soldier rounded out its first week of release with a first place take of $4.58 million on Thursday. The blockbuster 3D superhero sequel from Disney and Marvel was down 5 percent from Wednesday. It should be noted that hold actually represented one of the day's better daily percentage holds among wide releases, as most films experienced noteworthy percentage decreases on Thursday. Captain America: The Winter Soldier was easily the week's top film with a strong seven-day start of $117.61 million. That was in line with the film's lofty expectations and was 8 percent stronger than the $108.51 million seven-day start of last year's Thor: The Dark World. It is widely expected that Captain America: The Winter Soldier will find itself in a close race with Fox's Rio 2 for first place this weekend.

Paramount's Noah grossed $1.03 million to remain in second. The Darren Aronofsky directed biblical epic starring Russell Crowe was down 7 percent from Wednesday and down a sharp 55 percent from last Thursday. Noah placed in a distant second for the week with $22.08 million. That was down a discouraging 60 percent from the film's opening week performance and brings the film's 14-day total to $77.42 million. Noah is currently running 9 percent behind the recent $85.09 million 14-day take of 300: Rise of an Empire.

Lionsgate's Divergent held steady in third place with $0.776 million. The successful young adult adaptation starring Shailene Woodley was up 1 percent over Wednesday and down 48 percent from last Thursday. Divergent placed in third for the week with $16.35 million. That was down 49 percent from the previous frame and brings the film's three-week total to $117.38 million. Today it was announced that the Divergent series will consist of four films instead of three, as Allegiant will now be split into two films: Allegiant - Part 1, which will be released on March 18, 2016 and Allegiant - Part 2, which will be released on March 24, 2017.

God's Not Dead took in $0.639 million to continue to claim fourth place. The break-out faith-based drama from Freestyle and Pure Flix was down 7 percent from Wednesday and down a healthy 18 percent from last Thursday. God's Not Dead placed in fourth for the week with $10.56 million. That was down just 11 percent from the previous week and brings the 21-day total for the film to a much stronger than expected $35.36 million.

Fox Searchlight's The Grand Budapest Hotel rounded out the day's unchanged top five with $0.508 million. The critically acclaimed Wes Anderson directed film decreased just 4 percent from Wednesday and was down 27 percent from last Thursday. The Grand Budapest Hotel finished in fifth for the week with $8.34 million and has now grossed $35.42 million through 35 days of release.