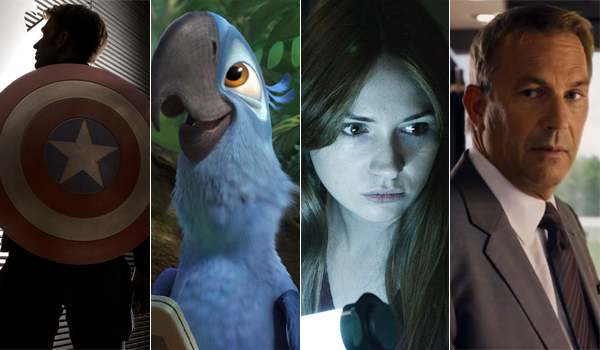 Captain America: The Winter Solider took in $4.73 million on Tuesday to continue to lead the daily box office. The blockbuster 3D superhero sequel from Disney and Marvel was up 36 percent over Monday and down a healthy 32 percent from last Tuesday. Midweek grosses continued to be stronger than usual in general on Tuesday due in part to Holy Week. Captain America: The Winter Soldier has grossed a strong $167.07 million through twelve days. That places the film 11 percent ahead of the $150.04 million twelve-day take of last year's Thor: The Dark World.

Fox's Rio 2 held steady in second place with $4.26 million. The 3D computer animated sequel from Blue Sky Studios was up a terrific 60 percent over Monday's performance, as family films held up especially well on Tuesday. Rio 2 has grossed $46.26 million through five days of release. That is in line with pre-release expectations and places the film a slim 1 percent behind the $46.68 million five-day start of 2011's Rio (which increased 28 percent on its first Tuesday to gross $4.18 million).

Draft Day was up 43 percent and one spot from Monday to claim third on Tuesday with $1.25 million. Lionsgate's modestly budgeted sports drama starring Kevin Costner has grossed $11.91 million in five days. That is a bit below expectations, but the film will hope to build upon Tuesday's strong hold going forward. Draft Day is currently running 16 percent behind the $14.21 million five-day take of recent Costner vehicle 3 Days to Kill.

Paramount's Noah rounded out the day's top five with $1.04 million. The Darren Aronofsky directed biblical epic starring Russell Crowe was up 47 percent over Monday and down 37 percent from last Tuesday. Noah has grossed $86.73 million in 19 days, which leaves it $13.27 million away from reaching the $100 million domestic milestone.

Divergent followed closely behind in sixth with $1.01 million. Lionsgate's successful young adult adaptation starring Shailene Woodley was up 50 percent from Monday down only 2 percent from last Tuesday. The 26-day total for Divergent stands at $126.43 million.