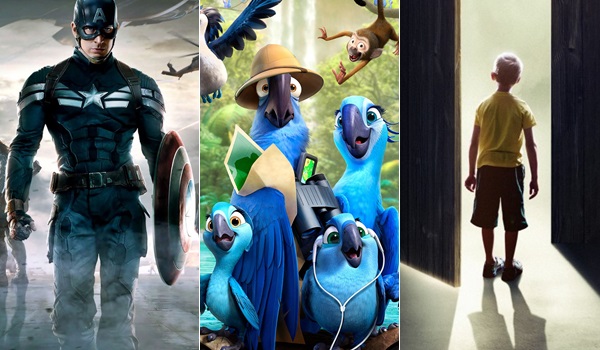 Captain America: The Winter Solider returned to the top of the daily box office on Thursday with $4.32 million. The blockbuster 3D superhero sequel from Disney and Marvel was up 23 percent over Wednesday and down a slim 6 percent from last Thursday. Midweek grosses continued to be stronger than usual in general on Thursday due in part to Holy Week. The Winter Soldier was the week's top film with $57.31 million. That was down 51 percent from the film's opening week performance and brings the two-week total for the film to a strong $174.91 million. Captain America: The Winter Soldier is currently running 14 percent ahead of the $153.72 million 14-day take of last year's Thor: The Dark World.

Fox's Rio 2 was up 18 percent and one spot over Wednesday to place in second on Thursday with an estimated $3.58 milion. The 3D computer animated sequel from Blue Sky Studios placed in second for the week with a seven-day start of $52.86 million. That was in line with pre-release expectations and places the film just 3 percent behind the $54.48 million seven-day start of 2011's Rio.

Heaven is for Real was down two spots and a healthy 10 percent from Wednesday's opening day performance to claim third with an estimated $3.33 million. Sony's faith-based drama has grossed a very solid $7.03 million in two days of release. That places the film 16 percent behind the $8.36 million two-day midweek start of Titanic 3D ahead of Easter weekend back in 2012. With the aid of an A rating on CinemaScore, Heaven is for Real is likely to hold up well going forward.

Oculus held steady in fourth place with $1.02 million. The low-budget R-rated horror film from Relativity was up 17 percent over Wednesday. Oculus placed in third for the week with a seven-day start of $15.99 million. That was in line with expectations and places the film 6 percent ahead of the $15.07 million seven-day take of 2012's House at the End of the Street.

Lionsgate's Divergent was up 23 percent and one spot from Wednesday to round out Thursday's top five with $0.955 million. The successful young adult adaptation starring Shailene Woodley was also up 23 percent from last Thursday. Divergent placed in sixth for the week with $10.79 million and has grossed $128.16 million in four weeks.

Fellow Lionsgate release Draft Day was down one spot from Wednesday to land in sixth with $0.913 million. The modestly budgeted sports drama starring Kevin Costner was up 10 percent over Wednesday. Draft Day placed in fourth for the week with a seven-day start of $13.65 million. That was a bit below pre-release expectations.