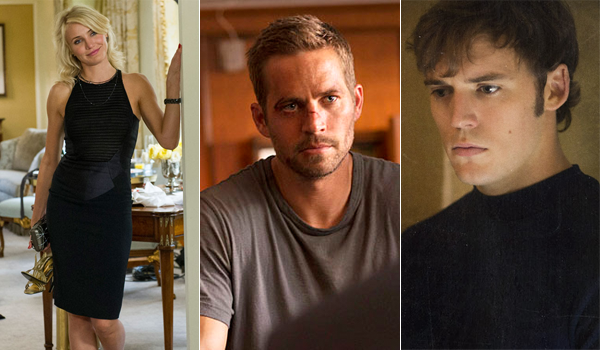 Sunday Update: Fox's The Other Woman easily led the way this weekend with an estimated start of $24.7 million. The comedy starring Cameron Diaz, Leslie Mann and Kate Upton exceeded its pre-release expectations heading into the weekend. The film likely received an added boost from the relative lack of films aimed directly towards female moviegoers over the past two months. Diaz tends to be hit and miss at the box office when in starring roles, with The Other Woman clearly looking like a hit at this point, especially given its modest price tag. Diaz will be back in theatres before long, when Sony releases Sex Tape on July 25. The Other Woman debuted 22.5 percent stronger than the $20.17 million start of 2008's What Happens in Vegas, though it remains to be seen if it will be able to hold up nearly as well as that film did.

The Other Woman should provide a strong counter programming option to Sony's The Amazing Spider-Man 2 next weekend, but will face new direct competition the following weekend when Universal releases Neighbors on May 9. The Other Woman opened with $9.3 million on Friday, increased 4 percent on Saturday to take in $9.65 million and is estimated to decline 40 percent on Sunday to gross $5.75 million. That places the film's estimated 3-day to Friday ratio at 2.66 to 1. The film received a solid B+ rating on CinemaScore.

The weekend's other high-profile new wide release, Relativity's Brick Mansions, debuted in fifth place with an estimated $9.6 million. The action thriller starring the late Paul Walker debuted towards the higher end of its modest expectations. The debut was a respectable one given the film's modest price tag and the fact that it was a relatively late addition to the release date calendar. Brick Mansions opened with $3.59 million on Friday, was up a slim 1 percent on Saturday to gross $3.62 million and is estimated to fall 34 percent on Sunday to take in $2.39 million. That puts the film's estimated 3-day to Friday ratio at 2.67 to 1. Like The Other Woman, Brick Mansions also received a B+ rating on CinemaScore. Brick Mansions will likely take a significant hit from The Amazing Spider-Man 2 next weekend.

Heaven is for Real also held up nicely this weekend with an estimated third place take of $13.8 million. The break-out faith-based drama was down a solid 38 percent from last weekend's Easter inflated debut. Heaven is for Real received a bit of additional help this weekend thanks to expanding into an additional 288 locations. With a strong twelve-day start of $51.91 million, Heaven is for Real is clearly continuing the recent trend of faith-based films that have exceeded expectations at the box office (joining Son of God and God's Not Dead). Heaven is for Real will hope to continue to hold up well going forward, thanks in part to strong word of mouth and from serving as a potential alternative to May's heavy line-up of likely blockbusters.

Lionsgate's The Quiet Ones debuted in seventh place with an estimated $4.0 million. The lower profile PG-13 horror film debuted below its already low pre-release expectations. The Quiet Ones was unable to make much noise across social media platforms in the weeks leading up to its release, which is typically a very troubling sign for horror films. The film received a lackluster C+ rating on CinemaScore and should fade away from theatres quickly.

Meanwhile, Warner's Transcendence continued to disappoint in a very big way with an estimated sixth place take of $4.11 million. The pricey sci-fi drama starring Johnny Depp was down 62 percent from last weekend's already poor start and has grossed just $18.47 million through ten days of release (which is below what most had been expecting the film to gross during its opening weekend).

In other box office news, Disney's Frozen surpassed the $400 million domestic mark this weekend after grossing an estimated $152,000 for the frame. Without adjusting for ticket price inflation, Frozen is the 19th film to have reached the $400 million milestone and is the sixth Disney release to have done so.

Saturday Update: Fox reports that The Other Woman hauled in $9.3 million on Friday, putting the comedy on track for a very healthy $24 million opening weekend. The lineup of Cameron Diaz, Leslie Mann, and Kate Upton has proven to be a hit with the film's targeted female audience. Early word of mouth from the Flixster community is modest with a 69 percent score as of Saturday morning.

Brick Mansions, starring the late Paul Walker, posted $3.59 million in its opening day. BoxOffice projects the actor's second-to-last film will tally $10 million by the end of the weekend.

Rounding out this weekend's openers, Lionsgate's The Quiet Ones grossed a soft $1.52 mllion on Friday. The PG-13 horror flick should take in around $3.8 million for the weekend. Word of mouth appears to be struggling so far with a low 39 percent Flixster score.

Friday Update #2: Sources report that The Other Woman is performing well so far today, with a chance at topping $20 million for the weekend.

Meanwhile, Brick Mansions is on pace to bring in between $8 million and $10 million for the weekend.

Lionsgate's The Quiet Ones is off to a sluggish start today. Early reports indicate the horror flick may fall below $7 million for the weekend.

Check back throughout the day for further updates on Brick Mansions, as well as this weekend's other new releases (The Other Woman and The Quiet Ones).

Tags: The Other Woman, Brick Mansions, The Quiet Ones, Rio 2, Captain America: The Winter Soldier, north-america