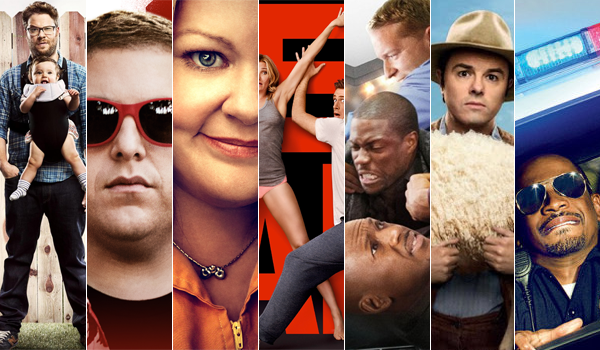 As Neighbors prepares to move in with a bang this weekend, we're taking a look at this summer's packed comedy line-up. Recent years have given movie fans a steady output of breakouts in the genre (especially the R-rated breed), and the next few months shouldn't break from that trend.

Notable points include the emerging legacy of "the Judd Apatow crew", which will be ever-present this summer as Seth Rogen, Jonah Hill, and Jason Segel each headline their latest works. Also, Universal looks to continue its strong start to 2014, while Sony has three potential winners lined up for the heart of summer.

Seth Rogen and Zac Efron headline this hit-in-waiting about new parents battling the fraternity next door, and the combination of the two leading men should serve to attract both men and women.  Fandango pre-sales suggest an opening near $40 million, possibly more, could be in store. Opening weekend demand will lean more toward Rogen's established fan base, but the film's reportedly strong balance of gags and heart indicates Neighbors will play well in the weeks ahead. As the first widely appealing comedy to open since winter, the stars are aligning for Neighbors in a way that proved advantageous for summer releases like Knocked Up, The Hangover, Bridesmaids, and Ted.

Adam Sandler and Drew Barrymore reunite for the third time in their careers with this Memorial Day weekend opener. Unfortunately, the film hasn't generated much traction in terms of buzz so far, but Sandler certainly has his audience that usually shows up for his outings. Word of mouth on Neighbors and competition from X-Men: Days of Future Past and Godzilla's second weekend will likely hinder it, but families will be the key wild card to Blended's performance.

A Million Ways to Die in the West (Universal)
May 30

The human version of Seth MacFarlane headlines a live action film for the first time in this farcical comedy-western. The blockbuster stature of Ted increased MacFarlane's star in a big way, but western-set films have a poor reputation at the box office these days unless they're contending for awards. The fact that Universal dated the film three weeks after its own Neighbors is also suspect with their significantly overlapping target audiences. Expectations are conservative, but Million Ways has a creator that's already proven himself when taking risks.

The first flick sprouted excellent legs with its springtime release two years ago, driven by word of mouth that couldn't stop praising the chemistry between Jonah Hill and Channing Tatum. Directors Phil Lord & Chris Miller, hot off The LEGO Movie, should also be credited as they continue successfully experimenting in the realm of comedy. CinemaCon attendees were enthused by early footage from the sequel, while both Hill and Tatum have continued to bolster their drawing power through pics like This is the End, The Wolf of Wall Street, and Magic Mike. In the vein of The Hangover Part II, this Jump Street has plenty of reason to post a strong opening on the back of goodwill from its predecessor. If the creative team has avoided the sophomore slump plaguing comedies lately, look for this to be the genre's top earner over summer... if not the year.

Kevin Hart headlines yet another flick, and his first sequel, in this follow-up to 2012's sleeper success. The film's target audience has been mostly underserved since Hart's own Ride Along became one of 2014's first breakouts. Hart is hard to bet against right now, and the first film's positive reception should translate into a healthy opening for Think Like a Man Too as it counter-programs the season's R-rated comedies and bigger blockbusters. It isn't likely to be among the top comedy grossers this summer, but it doesn't need to be.

Melissa McCarthy returns to the original comedy platform, this time co-writing with her husband (and the film's director), Ben Falcone. Susan Sarandon, Dan Aykroyd, Kathy Bates, Allison Janney, Toni Collette, Sandra Oh, and Gary Cole round out an impressive ensemble that should appeal strongly to adult patrons over Fourth of July weekend. The newest trailer promises McCarthy's infectious brand of profanity through a title character that catches her cheating husband and hits the road with her hard-drinking grandmother. If Tammy falls in step with past crowd-pleasers like Bridesmaids, The Heat, and Identity Thief, look for it enjoy a leggy run through summer's second half.

This tale about a married couple hunting down their missing titular recording reunites Jason Segel and Cameron Diaz following 2011's Bad Teacher. Director Jake Kasdan is behind the camera, having previously helmed Teacher following the cult hit (and unfortunate box office flop), Walk Hard: The Dewey Cox Story. As evidenced by The Other Woman, Diaz still commands drawing power while Segel has solid credentials of his own through Forgetting Sarah Marshall, I Love You, Man, The Muppets, and the recently-ended How I Met Your Mother TV series. Between the two leads and a director on the rise, it wouldn't be surprising for Sex Tape to become another comedy winner for Sony.

Summer's final major comedy release pits Jake Johnson and Damon Wayans, Jr. as buddies mistaken for real cops at a costume party. The first trailer shows off the film's ensuing high-concept shenanigans and offers a preview of what could be star-making roles for the leading men. With a crowded market over the next three months, Let's Be Cops isn't on many radars yet and could be hindered by limited demand if the preceding comedies strike gold. Nevertheless, R-rated laughers are hot commodities right now, and Let's Be Cops is certainly one to watch out for.