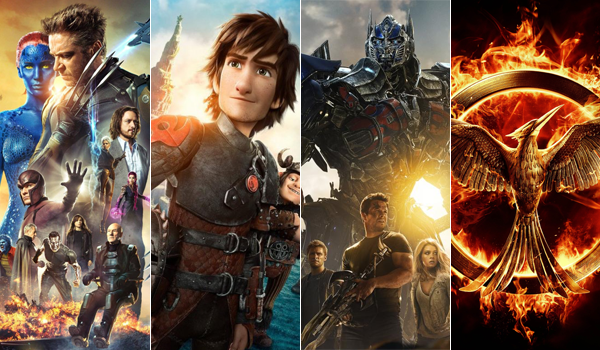 As Godzilla blew past industry expectations with a monstrous $93.2 million domestic bow last weekend, it also established the market's longest drought without a $100 million opener in nearly three years.

Overall, the current 25-week span is the third longest period without a $100 million opener since 2008. The two longer stints: 34 weeks between the Harry Potter and the Deathly Hallows two-part finales in November 2010 and July 2011, and the 49-week lull that separated 2009's Transformers: Revenge of the Fallen and July 2008's The Dark Knight. The average gap since then has been about 18 weeks.

For the record, the shortest turnaround time between $100 million openers since May 2007 has been six weeks. That was accomplished three times (Iron Man 3 to Man of Steel last year, The Hunger Games to The Avengers in 2012, and Iron Man 2 to Toy Story 3 in 2010).

Granted, these stats bear notable caveats. Three films (Captain America: The Winter Soldier, The Amazing Spider-Man 2, and Godzilla) have topped $90 million in the last six weeks alone. The only other times in history that has occurred were in 2013 (Iron Man 3, Fast & Furious 7, and Man of Steel) and 2007--when the infamous "big three" of Spider-Man 3, Shrek the Third, and Pirates of the Caribbean: At World's End respectively earned $151 million, $122 million, and $115 million three-day openings within a record four-week span.

Additionally, movies such as Despicable Me 2, The Amazing Spider-Man, Transformers: Dark of the Moon, and The Hangover Part II may have reached nine-figure weekends had they not received pre-Friday launches.

Nevertheless, while this "slump" isn't necessarily indicative of the market's overall health (year-to-date, 2014 is up 6 percent over 2013), it does illuminate two key facts: audiences have agreed that 2014 so far lacks many uber-event level flicks, and/or they simply have grown wise to Hollywood's packed-house frontloading strategy and are choosing to wait out the big crowds until subsequent weekends.

With two presumed contenders having just missed the mark (Winter Soldier and Amazing Spider-Man 2), we're now left with three summer front-runners: this weekend's X-Men: Days of Future Past, June 13's How to Train Your Dragon 2, and June 27's Transformers: Age of Extinction. There's a case for and against each:

Bryan Singer's anticipated return to the X-Men franchise has been drumming up encouraging audience buzz amid strong reviews, a fresh time travel concept in the superhero genre, and a strong ensemble cast of veterans and new favorites that general audiences won't ignore. Still, as the third comic book flick to open in less than two months, and given the franchise's under-performers in recent years, Days of Future Past does have some hurdles to overcome.

How to Train Your Dragon 2 may be the least likely candidate for a $100 million+ debut simply because animated movies are less front-loaded by nature. Kids and families will drive its legs throughout the summer, but a triple-digit opening will require a near-perfect storm of buzz come mid-June. Could it follow in the footsteps of the Shrek and Toy Story franchises as the only animated films to clear the "century mark"? 2010's first film was certainly beloved well enough by adults and kids to make it happen, and the success of recent animated blockbusters like Frozen and The LEGO Movie could spillover for summer's lone animation event.

Finally, Transformers: Age of Extinction is currently set for a Friday release one week before the Fourth of July holiday. The franchise is at a stage where fatigue typically sets in for fourth installments (see The Amazing Spider-Man, Shrek Forever After, X-Men Origins: Wolverine, and Pirates of the Caribbean: On Stranger Tides). The quasi-reboot approach of focusing on entirely new characters (led by Mark Wahlberg) could either pay off or backfire at this point--leaving a $100 million opening on the table, but far from locked. Paramount has also been known to bump the series' past release dates up to mid-week openings. A similar move this time would almost definitely take away Extinction's contending status.

Should those films miss out, and nothing else surprises in the interim, we'll be waiting until November when The Hunger Games: Mockingjay, Part 1 is set for a November 21 launch--and you can safely bet that will blow far past $100 million for what should be 2014's biggest opening weekend.

That being said, history is on the side of at least one movie snapping the streak sooner rather than later: only one summer (2003) has gone without a $100 million opening weekend since 2002's Spider-Man first set the nine-digit standard.

Which film do you think will break the streak? Discuss this story on the BoxOffice Forums

This story was originally published on May 20, 2014