Summer's For the Girls, Too: Will 'The Fault In Our Stars' & 'Maleficent' Jump-Start June? 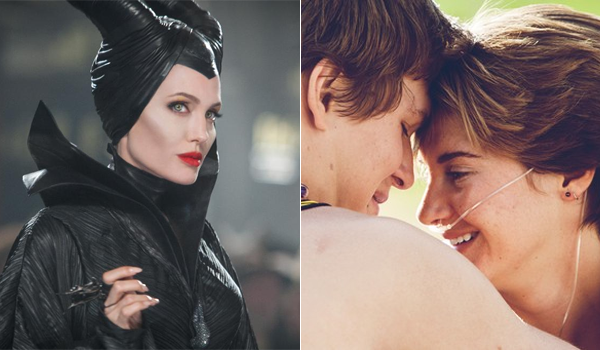 After a dude-friendly start to the summer movie season with flicks like X-Men: Days of Future Past, Godzilla, Neighbors, and The Amazing Spider-Man 2, summer's second quarter finally promises something for the ladies in May 30's Maleficent and June 6's The Fault in Our Stars.

Up first this weekend, Angelina Jolie's oft-passionate core audience is expected to turn out for Disney's live action version of the famous Sleeping Beauty villain. The film follows in the recent tradition of Alice in Wonderland and Oz the Great and Powerful as the studio introduces classic fairy tale characters to a young, modern audience. The flick represents summer's first tentpole targeted toward women of all ages--an important strategy for Hollywood in the post-Hunger Games climate (or any climate, really).

The presence of a mega-star in Jolie, big scale visuals, and the revival of Disney's drawing power among moms and daughters (thanks to the phenomenal success of Frozen) should make for a potent opening weekend. Jolie and Maleficent will likely surpass the $56.2 million debut of June 2012's Snow White and the Huntsman, and, for a bit of fun household rivalry, could even top her man Brad Pitt and World War Z's $66.4 million bow last summer.

Those kinds of numbers aren't likely to be repeated by next week's The Fault in Our Stars, but the young adult adaptation is looking no less impressive. The title has generated an astounding half-million tweets over the last week alone, topping all other films during the same period. Fault has also added 1.1 million fans on Facebook since the end of April--giving it a strong 3.1 million total "likes" through May 27. Even franchise-starter, and fellow Shailene Woodley vehicle, Divergent boasted just under 1 million Facebook fans by the time it released. Movies relating to cancer rarely light up the box office, making these metrics all the more noteworthy.

Stars will cater mostly to ticket-buyers under 25, but don't mistake it as just another benefactor of the "YA craze". As a former New York Times and Wall Street Journal bestseller, author John Green's The Fault in Our Stars has proven its commercial and critical appeal with positive reviews across the board, suggesting that adult curiosity in the film could also be in play. Buzz recalls that of The Notebook, which grew into a word of mouth sensation after its June release ten years ago. Before finishing with a stellar $81 million domestically, the Nicholas Sparks adaptation opened to a modest $13.5 million in an era before social media could drive excitement for a non-fanboy movie months in advance.

Breaking bigger than indie hits The Spectacular Now and The Perks of Being a Wallflower looks all but guaranteed at this point as The Fault in Our Stars is expected to open significantly higher, with current expectations for next week's launch being upward of $30 million for the Fox release.