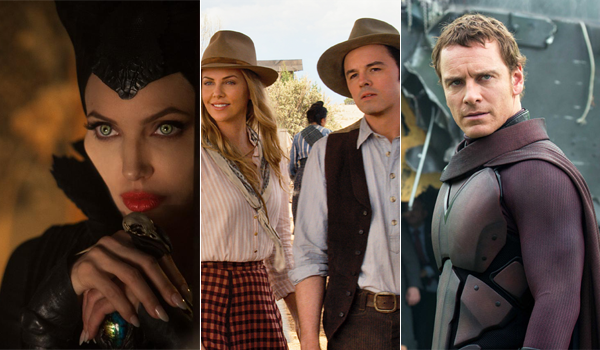 Disney's Maleficent took in $7.20 million on Tuesday to lead the daily box office for a fifth straight day. The 3D fantasy film starring Angelina Jolie increased 16 percent over Monday's performance. Maleficent surpassed the $80 million mark yesterday and has now grossed $82.84 million through five days. That is on the very high end of the film's lofty pre-release expectations. Maleficent is currently running 23 percent ahead of the $67.16 million five-day start of 2012's Snow White and the Huntsman and 10.5 percent behind the $92.54 million five-day take of last year's Oz The Great and Powerful. Maleficent will likely take a significant hit this weekend with Fox's The Fault in Our Stars entering the marketplace on Friday.

X-Men: Days of Future Past held steady in second place with $3.79 million. Fox's 3D superhero sequel was up a very solid 20 percent from Monday, but still down 54 percent from last Tuesday. X-Men: Days of Future Past continues to perform towards the lower end of its massive expectations with a twelve-day take of $168.97 million. That places the film 63 percent ahead of the $103.72 million twelve-day take of 2011's X-Men: First Class and 7 percent behind the $181.31 million twelve-day gross of 2006's X-Men: The Last Stand.

Godzilla took fourth place with $1.37 million on Tuesday. Warner's 3D sci-fi action remake was up 19 percent over Monday and down 49 percent from last Tuesday. Godzilla has grossed $176.96 million in 19 days and will need to start stabilizing soon if it is to reach the $200 million domestic milestone.

Universal's Neighbors rounded out Monday's top five with $1.06 million, while Warner's Blended followed in sixth with $0.92 million. Daily percentage increases over Monday were 16 percent for Neighbors and 30 percent for Blended. Respective total grosses stand at a strong $130.94 million for Neighbors in 26 days and at a disappointing $30.98 million for Blended in twelve days.

Tags: north-america, Godzilla, A Million Ways to Die in the West, X-Men: Days of Future Past, Maleficent