OPINION: Does the Media Have a Responsibility to Avoid Spoiling—and Overhyping—'Star Wars: Episode VII'? 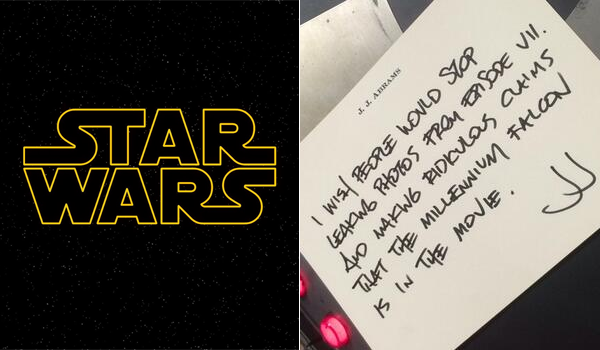 Director J.J. Abrams beat us all to the punch in a far more effective way than I can hope to achieve here, but nevertheless...

If you've visited a major entertainment news outlet in recent days, you probably stumbled upon revealing headlines surrounding Star Wars: Episode VII. Monday saw more than 40 spy photos leak from the sequel's Abu Dhabi sets ("courtesy" of a site that will remain unnamed), followed by an even more notable round of prohibited pics on Tuesday. The latter revealed the presence of the (minor spoiler alert here) Millennium Falcon in the hugely anticipated follow-up to Return of the Jedi. (For the record, we're acknowledging it only because Abrams and his production company, Bad Robot, took to social media on Wednesday morning to succinctly express his displeasure over the leaked images, while also confirming the Falcon will play a part in the film, albeit sarcastically.

The question of the day: would he have confirmed such information had there never been any rumor of the Falcon's involvement in the movie?

We'll never know. Observers have theorized that leaked information has sometimes been unofficially enabled as a means to drum up buzz (as if this movie needs more of it). That's speculation at best, so let's operate under the notion that Abrams--a practiced expert at veiling his projects in as much uncertainty as possible--would be perfectly willing to keep every frame of Episode VII a secret if given the option. Had he been working on this project thirty years ago, he'd more easily get his wish (not to mention the wish of fans like myself).

Unfortunately, we live in an era of journalism that has slowly lost the respect for the integrity of filmmaking--particularly when it comes to online media. Spoilers for films, often years from release, proliferate more than fan blogs now. Not all outlets are so cavalier in allowing them, but a growing number seem to be. Case in point: yesterday's headlines of the second round of leaked photos outright named the Falcon as the subject--before any official confirmation, and without any semblance of a spoiler warning.

Granted, this is minor compared to the bigger potential spoilers that could eventually leak, and there are fans who willingly seek out such material. That's their choice, though. Abrams' sly confirmation is even commendable after he took fan heat for concealing Benedict Cumberbatch's true identity in Star Trek Into Darkness. Still, when official news headlines are freely giving away plot points (minor or not), a far more egregious line is crossed as unsuspecting readers are no longer given the choice to avoid said information they--and especially the filmmakers--would rather keep unknown.

Another example of this trend occurred three years ago when set photos from multiple plot-pivotal scenes of The Dark Knight Rises leaked--sequences that had never been referenced in an official capacity up to that point. Marvel movies have also fallen victim in recent years as websites reveal story arcs and character backgrounds as if they're common knowledge. It may not be news to avid fans, but many of us would prefer to stay in the dark. Or, at least, warn us before the shroud is lifted.

This isn't the first time it's happened with Star Wars, nor will it be the last (a sad fact). Furthermore, one can already imagine the fan outcry if the Falcon proves to only have a brief appearance in the film. If that were to be the case, claims of overhype are guaranteed to be thrown around because viewers are building up their own expectations based on limited information. And as the prequels proved, this franchise has plenty of sky-high expectations already.

The unsettling reality here is that Episode VII has barely begun production, and the outpouring of unconfirmed plot details has already begun. It's no surprise, but it's a dangerous line to walk after the slew of other Star Wars plot rumors popped up on lesser-known sites earlier this year--most of which are probably fake, but no one outside the production team truly knows. At this rate, it's only a matter of time before roughly accurate summaries of the movie's three acts find their way online before its December 18, 2015 release.

Is there a solution? Probably not, because this is the "accepted" way of the Internet now. Filmmakers like Abrams, Christopher Nolan, and others have taken measures through their production teams to ensure as few leaks as possible, but nothing is foolproof. Some things will inevitably slip through, all for the sake of credit and page views.

Some may read this as an overreaction to an insignificant (and admittedly, exciting) piece of news, but as one of many passionate film lovers around the world, I'm not alone in these opinions. Whether it's intentional sensationalism motivated by desire for ad revenue, or just good old fashioned naivete, we--the film community, the media, and movie fans at large--have a responsibility. Let's do our part and curb the trend of openly spoiling movies before the experience of seeing it in a theater is wholly watered down, and falsely substituted, by reading an online gossip site.

That's the direction we're heading in, and it's a disturbing shame with potential ramifications for both the artistic and business sides of the industry. Thousands of men and women contribute to the production of a film like this, and each of them deserve more respect for the work they're putting into a movie that the world is eager enough to see.