NORTH AMERICA: Studio Estimates: Sony Claims First as 'Think Like a Man Too' Opens with $30.0M and Second as '22 Jump Street' Takes in $29.0M 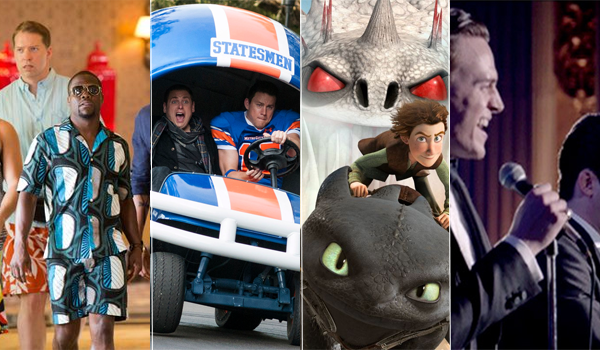 Think Like a Man Too opened with $12.23 million on Friday (which included an estimated $1.8 million from evening shows on Thursday), fell 15 percent on Saturday to gross $10.4 million and is estimated to decline 29 percent on Sunday to take in $7.38 million. That places the film's estimated opening weekend to Friday ratio at a so-so 2.45 to 1. Going forward, Think Like a Man Too will hope that summer midweek business helps balance out what will likely be more initial front-loading than Think Like a Man experienced. The audience breakdown for Think Like a Man skewed towards female moviegoers (63 percent) and towards moviegoers 30 years and older (59 percent). The film received a solid A- rating on CinemaScore.

Fellow Sony release 22 Jump Street claimed second place with an estimated $29.0 million. The action comedy sequel starring Jonah Hill and Channing Tatum was down 49 percent, which represented a respectable second weekend hold, especially given how much initial front-loading towards Friday the film displayed last weekend and that the film faced new competition from Think Like a Man Too. 22 Jump Street surpassed the $100 million domestic milestone this weekend and has grossed a strong $111.45 million in ten days of release. That places 22 Jump Street 59 percent ahead of the $70.22 million ten-day take of 2012's 21 Jump Street and 10 percent behind the $123.69 million ten-day gross of last year's World War Z.

Warner's Jersey Boys debuted in fourth place this weekend with an estimated $13.52 million. The Clint Eastwood directed musical opened in line with its modest pre-release expectations. Jersey Boys opened 6 percent below the $14.44 million opening weekend take of 2012's Rock of Ages. Going forward, Jersey Boys will hope to hold up better than Rock of Ages did, due in part to skewing extremely towards older moviegoers (92 percent of the film's audience was over the age of 25, while 71 percent was over the age of 50). The audience breakdown for Jersey Boys also skewed towards female moviegoers (61 percent).

Jersey Boys opened with $4.64 million on Friday, increased a solid 12 percent on Saturday to take in $5.21 million and is estimated to decline 30 percent on Sunday to gross $3.67 million. That places the film's estimated opening weekend to Friday ratio at an encouraging 2.92 to 1. The film's A- rating on CinemaScore is also an early encouraging sign going forward.

Maleficent rounded out the weekend's top five with an estimated $13.01 million. Disney's 3D fantasy blockbuster starring Angelina Jolie was down a very healthy 30 percent from last weekend. The 24-day total for the film stands at an impressive $185.98 million, which leaves the film just $14.02 million away from reaching the $200 million domestic milestone.

Saturday Update: Sony reports that Think Like a Man Too earned $12.2 million on Friday as the sequel claimed first place for the day. BoxOffice projects a $32 million opening weekend from there, continuing Kevin Hart's box office winning streak. The original film opened to a similar $33.6 million in April 2012. Early word of mouth appears solid with a 77 percent Flixster score as of Saturday morning, comparable to that of Ride Along's 79 percent.

Warner Bros.' Jersey Boys grabbed $4.64 million yesterday and could ring up $13.3 million for its opening weekend. Those figures are much softer than early sources had indicated would be the case last night, owing largely to slow late night business and possibly indicating some extra frontloading. Still, with an older target audience than most films in release right now, anything is on the table. Early word of mouth is fair with a 71 percent Flixster score, although the online platform isn't really indicative of the movie's typical viewer.

Meanwhile, 22 Jump Street is holding very well with a $9.4 million second Friday and projected $30 million sophomore frame. The Sony sequel's 8-day domestic haul is a strong $91.85 million. How to Train Your Dragon 2 added $7.6 million yesterday for a 59 percent week-to-week drop, giving it $77.5 million though 8 days and setting it on course for a $25.5 million second weekend.

Friday Update #2: Sources report that Think Like a Man Too is on course for an opening day around $12 million, which could give it a $32-34 million weekend.

Meanwhile, Jersey Boys is performing above pre-release expectations and could top $8 million on Friday. The film's older crowd points to a relatively strong weekend ahead as Baby Boomer fans of the popular Broadway show, not to mention the original band itself, turn out for Clint Eastwood's drama. If $8 million holds for Friday, expect a weekend close to $20-22 million.

Friday Update: Sources report that Think Like A Man Too rang up $1.8 million from 8pm Thursday night shows, setting it on course for a likely weekend north of $30 million. Last night's performance tops the $1.06 million from Ride Along's 8pm Thursday shows in January, as well as the $0.69 million Thursday start of The Best Man Holiday.

Tags: Think Like a Man Too, Jersey Boys, 22 Jump Street, How to Train Your Dragon 2, north-america