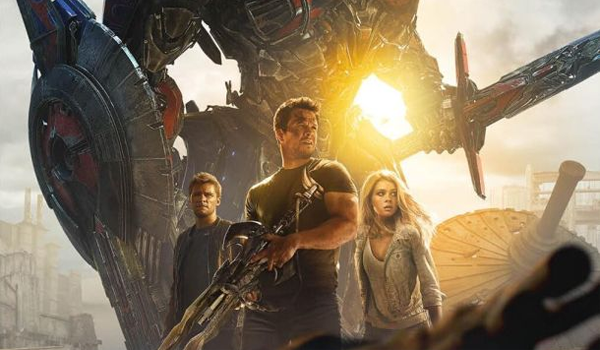 Transformers: Age of Extinction opened with $41.6 million on Friday (which included an estimated $8.75 million from late night shows on Thursday), fell 23 percent on Saturday to gross $32.15 million and is estimated to decline 18 percent on Sunday to take in $26.25 million. That places the film's opening weekend to Friday ratio at 2.40 to 1. While that ratio indicates significant initial front-loading, Transformers: Age of Extinction will hope to be helped out next weekend by what appears to be a relatively soft slate of releases by Independence Day weekend standards. The film's A- rating on CinemaScore is also an early encouraging sign going forward, though it should also be noted that early audience reaction to the film on Flixster has been far less impressive.

Sony's 22 Jump Street placed in a distant second with an estimated $15.4 million. The successful action comedy sequel starring Jonah Hill and Channing Tatum fell 44 percent from last weekend, which represented a solid hold, especially given the new direct competition the film faced from Transformers: Age of Extinction. 22 Jump Street has grossed an impressive $139.84 million in 17 days, which means it has already surpassed the $138.45 million final domestic gross of 2012's 21 Jump Street. 22 Jump Street is currently running 51 percent ahead of the $92.88 million 17-day take of 21 Jump Street.

On the heels of last weekend's first place debut, Sony's Think Like a Man Too fell three spots and a sharp 64 percent to land in fourth with an estimated $10.4 million. The Kevin Hart led ensemble comedy sequel was off to a very solid start last weekend (especially with its modest price tag in mind), but has displayed poor holding power since then. With a ten-day gross of $48.17 million, Think Like a Man Too is now running 20 percent behind the $60.47 million ten-day take of 2012's Think Like a Man.

Holding up far better this weekend was Disney's Maleficent, which was down just 36 percent to round out this weekend's top five with an estimated $8.24 million. In the process the 3D fantasy blockbuster starring Angelina Jolie surpassed the $200 million domestic milestone this weekend. Maleficent has grossed $201.87 million in 31 days and is very likely to continue holding up well going forward.

Sony's The Amazing Spider-Man 2 also surpassed the $200 million domestic mark this weekend. The 3D superhero sequel took in an estimated $320,000 for the frame and has grossed $200.18 million through 59 days of release.

In its second weekend, Warner's Jersey Boys placed in sixth with an estimated $7.61 million. The Clint Eastwood directed musical was down a solid 43 percent. Jersey Boys has grossed $27.34 million in ten days. That is in line with the film's modest expectations and places the film a slim 4 percent behind the $28.42 million ten-day take of 2012's Rock of Ages.

Saturday Update: Transformers: Age of Extinction brought in an official estimate of $41.6 million on Friday, including Thursday night's $8.8 million start. BoxOffice projects that Paramount's global tentpole could net a $102 million domestic opening weekend from there.

Unfortunately, early word of mouth won't be doing the sequel many favors. Extinction's Flixster audience score is hovering at 66 percent as of Saturday morning--one of the lowest post-opening day results of the year for a high profile release and 10 percent behind The Amazing Spider-Man 2. On the plus side, though, this is a flick made almost primarily for international audiences, which means Paramount will be very happy with the global results.

Friday Update #2: Sources tell BoxOffice that Transformers: Age of Extinction is trending for an opening day close to $38 million based on matinee business. If that holds, the sequel could be on track for a $93-95 million opening weekend.

Friday Update: Sources report that Michael Bay's Transformers: Age of Extinction posted $8.8 million in its Thursday night bow at 9pm. That represents the third best Thursday launch of 2014 so far behind Captain America: The Winter Soldier's $10.2 million and Godzilla's $9.3 million, while edging out The Amazing Spider-Man 2's $8.7 million and X-Men: Days of Future Past's $8.1 million.

Will the four-quel reach $100 million for the weekend? Anything's possible at this point, but the franchise's history of drawing in a larger share of general audiences than the aforementioned comparisons will need to kick in starting Friday for that to happen. For now, an opening in the expected $90 million+ range looks likely. Stay tuned.