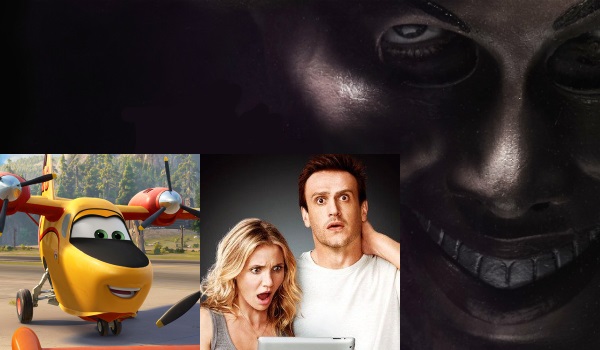 Thursday Morning Update: In what has proved to be a very curious development all three new openers this week fell in total tweets yesterday, Wednesday falls are not that uncommon but rare enough that I have never witnesses this many declines at once on it. Despite a 4% dip, The Purge: Anarchy still was miles ahead of its fellow fresh meat offerings on Wednesday as it rang in with 10,312 tweets, down from Tuesday's 10,710 tweets. Even with the slim decline Wednesday was the first time this week it outpaced the first film as that only accounted for 9,808 tweets its Wednesday before release, Paranormal Activity: The Marked Ones had 8,743 tweets, Oculus had 8,465 and Deliver Us From Evil had 4,768 (this was a Monday though as it was a Wednesday opener). This is the clear-shot winner on the weekend amongst the new offerings thanks to its buzz levels and favorable comparisons to others in the genre for 2014. We are predicting $28 million by Sunday which would make it to highest opening horror since Insidious Chapter 2 way back in September of last year.

After a very promising expansion on Tuesday Planes: Fire And Rescue dropped 19% to 2,491 tweets on Wednesday, down from 3,073 tweets on Tuesday. The first film had 2,849 tweets its Wednesday before release while The LEGO Movie had 18,155 tweets, Mr. Peabody And Sherman had 6,126 and The Legends Of Oz: Dorothy's Return had 1,327. It might not be opening to $22 million like the first film but the numbers here are still very healthy considering that there is very little crossover to non-family audiences for the film which will suppress numbers. $20 million looks to be within its grasp which will no doubt still be a win for the film when all is accounted for thanks to its hefty merchandising draw.

Sex Tape continued to flounder somewhat, dropping a further 13% to 1,974 tweets on Wednesday, down from 2,263 tweets on Tuesday. This was always going to be trouble to track via social media and I would argue that a super common and popular generic title such as this doesn't help marketing efforts for a film. We have projected that it will earn $23 million on the weekend based on all markers available to us. Earlier in the week I thought it might have stood a chance to be neck and neck with Purge: Anarchy but the lackluster numbers haven't helped to inspire any confidence that it will exceed the standard built-in audiences for Diaz/Segal.

Avengers: Age Of Ultron released a bunch of details about the film and some stills from the feature which completely blew up on Twitter. 47k tweets for a few details about a film is unheard of and really makes me wonder just how huge the film will be. When you consider that the debut trailer from the first film generated 46k tweets it goes to show just how much awareness has grown. Seems strange to say but $200 million appears to be a lock here based on all early signs.