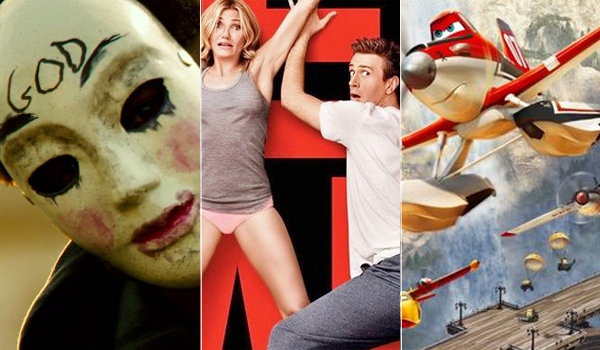 Universal's The Purge: Anarchy was easily the strongest of the weekend's three new wide releases, with a second place estimated take of $28.37 million. The sequel to last year's break-out horror film debuted in line with expectations. However, the film did open 17 percent below the $34.06 million debut of The Purge. The Purge: Anarchy took in $13.0 million on Friday (which included an estimated $2.6 million from Thursday night shows), fell 27 percent on Saturday to gross $9.5 million and is estimated to fall 38 percent on Sunday to take in $5.87 million. That places the film's estimated opening weekend to Friday ratio at 2.18 to 1, which actually represents a bit less initial frontloading than the 2.03 to 1 ratio registered by The Purge. The Purge: Anarchy will hope to hold up a bit better than The Purge did, in part from not having to face competition from the likes of Man of Steel and World War Z. The Purge: Anarchy received a solid B rating on CinemaScore. The audience breakdown for the film skewed slightly towards female moviegoers (52 percent) and towards moviegoers under the age of 25 (61 percent).

Planes: Fire and Rescue debuted in third with an estimated $18.0 million. The modestly budgeted computer animated sequel from Disney opened slightly below pre-release expectations and 19 percent below the $22.23 million debut of Planes last summer. While this summer has had a relatively limited amount of choices for family audiences, Planes: Fire and Rescue may have failed to have capitalized from the fairly empty family marketplace due in part to arriving in theatres so soon after its predecessor. Planes: Fire and Rescue opened with $6.29 million on Friday, increased 4 percent on Saturday to take in $6.56 million and is estimated to fall 21.5 percent on Sunday to gross $5.15 million. That gives the film an estimated opening weekend to Friday ratio of 2.86 to 1. Planes: Fire and Rescue received a strong A rating on CinemaScore. The audience breakdown for the film was split evenly between genders and skewed towards moviegoers 25 years and younger (59 percent). Family audiences represented 78 percent of the film's overall audience.

Sony's Sex Tape debuted in fourth with a poorer than expected $15.0 million. The R-rated comedy starring Cameron Diaz and Jason Segel opened a disappointing 52.5 percent softer than the $31.60 million start of 2011's Bad Teacher. Sex Tape appears to have been hurt from both its poor critical reviews and from arriving in the marketplace on the heels of a number of successful comedies over the past few months (The Other Woman, Neighbors, 22 Jump Street and Tammy). Sex Tape opened with $5.7 million on Friday (which included an estimated $1.1 million from Thursday night shows), fell 7 percent on Saturday to gross $5.3 million and is estimated to decline 24.5 percent on Sunday to gross $4.0 million. That places the film's estimated opening weekend to Friday ratio at 2.63 to 1. While Sex Tape could be helped out going forward by the lack of new comedies entering the marketplace over the next few weeks, its troubling C+ rating on CinemaScore isn't a good early sign. The audience breakdown for Sex Tape skewed slightly towards female moviegoers (53 percent) and moviegoers 30 years and over (52 percent).

Transformers: Age of Extinction rounded out the weekend's top five with an estimated $10.0 million. The fourth installment of Paramount's blockbuster sci-fi action franchise finally stabilized this weekend, as it was down a solid 39 percent. Transformers: Age of Extinction has grossed $227.16 million through 24 days of release. While that already makes the film one of the year's highest grossing releases thus far domestically, it is also a significant 28 percent softer than the $317.37 million 24-day take of 2011's Transformers: Dark of the Moon.

Warner's Tammy placed in sixth with an estimated $7.61 million. The Melissa McCarthy comedy vehicle was down a solid 39 percent and was likely helped out a bit this weekend by the poorer than expected start of Sex Tape. Tammy has grossed a very solid $71.25 million in 19 days, which already gives the film a current total gross to opening weekend ratio of 3.30 to 1.

On the platform front, IFC Films' Boyhood maintained momentum nicely this weekend with an estimated $1.198 million from 34 locations. That gave the film a strong per-location average of $35,230 for the frame and represented a 209 percent increase over last weekend's five-location start. Boyhood has grossed a strong $1.85 million in ten days of platform release and will expand into additional locations next weekend.

Saturday Update: Universal reports that The Purge: Anarchy hauled in an estimated $13 million on Friday--a healthy start for the sequel, albeit down from the first film's $16.8 million first day last summer (on its way to a $34.1 million weekend). BoxOffice projects Anarchy will go on to earn $26.5 million this weekend. Early word of mouth appears modest with a 70 percent Flixster user score, although that is slightly higher than any other horror pic one day after release this year.

The weekend will ultimately belong to Fox's Dawn of the Planet of the Apes, though. The well-received sequel earned another $10.4 million yesterday, down an expected 62 percent from opening day last week. Strong word of mouth should continue to propel the sequel as BoxOffice projects a sophomore frame around $34.5 million and a repeat in first place.

Disney's Planes: Fire and Rescue posted $6.29 million on Friday, giving it a shot at $17 million this weekend. By comparison, the first Planes earned a $22.2 million opening weekend. The sequel's Flixster user score is a soft 65 percent, although the online community is hardly the target audience for this film. With very little in the way animated competition through the remainder of summer, expect this one to follow in its predecessor's footsteps with solid holds.

Sony's Sex Tape grabbed $5.7 million yesterday and is projected to bring in $16.5 million for opening weekend. Unfortunately, that's noticeably down from 2011's previous Cameron Diaz-Jason Segel headliner, Bad Teacher, which earned $31.6 million on opening weekend. The soft debut here can largely be attributed to a satiated comedy market in the wake of successful films this summer like 22 Jump Street, Neighbors, and the recent Tammy. The pic's early Flixster score sits at 48 percent.

Please note: Official Friday estimates for Zach Braff's Wish I Was Here and Millennium Entertainment's Persecuted were not available at the time of publishing.

Friday Update #2: Sources tell BoxOffice that The Purge: Anarchy and Dawn of the Planet of the Apes could be in a close race for first this weekend based on Friday matinees. Conflicting reports suggest the advantage could swing in Apes' favor relatively fast, though.

Meanwhile, Sex Tape and Planes: Fire and Rescue appear headed for their expected opening weekends in the low-to-mid $20 million range.

Friday Update #1: Sources report that The Purge: Anarchy earned $2.6 million on Thursday evening, a generally healthy start for the low-budget thriller but noticeably behind its predecessor's $3.4 million (which ultimately tallied a $34.1 million weekend). This sequel also debuted earlier in the evening (8pm versus 10pm), which further indicates a weekend that could end up around $25 million. That's not bad in the grand scheme of things, though it should make an interesting battle for the runner-up spot behind Dawn of the Planet of the Apes, which is expected to repeat as the number one film this weekend.

Contending with the Purge sequel this weekend is Sex Tape, which brought in $1.1 million from 7pm shows last night. By comparison, Tammy took in $1.3 million from Tuesday night shows earlier this month, while Neighbors brought in $2.56 million for its Thursday evening debut in May. An opening in the low-to-mid $20 million range looks likely for Sex Tape.

Rounding out the new wide releases, Planes: Fire and Rescue is set to perform on par with its predecessor as it tallied $0.45 million from 7pm shows last night. The first film bowed to a $22.2 million opening weekend last summer.

Tags: north-america, The Purge: Anarchy, Sex Tape, Planes: Fire and Rescue, Dawn of the Planet of the Apes