NORTH AMERICA: Studio Estimates: 'Teenage Mutant Ninja Turtles' Breaks Out with $65.0M; 'Guardians of the Galaxy' Holds up Well with $41.5M; 'Into the Storm' Takes Third with $18.0M 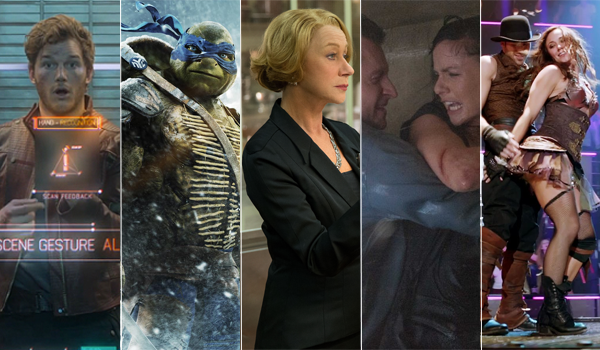 Sunday Update: Teenage Mutant Ninja Turtles broke out in a big way this weekend with a stronger than expected estimated first place take of $65.0 million. It had been widely expected that Paramount's high-profile franchise re-launch would find itself in a close battle with Guardians of the Galaxy for first place this weekend, but it ultimately won this weekend's box office race with absolutely ease. Following in the footsteps of Guardians of the Galaxy last weekend, Teenage Mutant Ninja Turtles marks another high-profile surprise break-out performance. The strong performances of the two films were much needed after the relatively weak month of July at the box office.

Teenage Mutant Ninja Turtles opened a massive 168 percent stronger than the $24.26 million debut of 2007's TMNT and has already out-grossed the $54.15 million final domestic gross of that film. Without adjusting for ticket price inflation, Teenage Mutant Ninja Turtles delivered the fourth largest opening weekend performance ever in the month of August (behind only Guardians of the Galaxy, 2007's The Bourne Ultimatum and 2001's Rush Hour 2). The film took in $25.61 million on Friday (which included an estimated $4.6 million from evening shows on Thursday), fell 14 percent on Saturday to gross $22.13 million and is estimated to decline 22 percent on Sunday to gross $17.27 million. That places the film's estimated opening weekend to Friday ratio at 2.54 to 1.

The audience breakdown for Teenage Mutant Ninja Turtles skewed towards male moviegoers (61 percent) and moviegoers 25 years and older (55 percent). The film received a so-so B rating on CinemaScore.

Disney's Guardians of the Galaxy placed in a strong second with an estimated $41.53 million. The blockbuster sci-fi superhero adaptation was down 56 percent from last weekend's break-out debut. That represented a very solid second weekend hold for a film of this size, especially given the stronger than expected launch of Teenage Mutant Ninja Turtles. Guardians of the Galaxy has grossed an exceptional $175.82 million through ten days of release. That places the film an impressive 11 percent ahead of the $158.88 million ten-day take of Captain America: The Winter Soldier earlier this year (which fell 57 percent to gross $41.27 million during its second weekend of release). With its current percentage lead over Captain America: The Winter Soldier and the aid of strong word of mouth, Guardians of the Galaxy has a very strong chance at this point of eventually out-grossing The Winter Soldier to become the highest grossing release of 2014 thus far domestically.

Warner's Into the Storm debuted in third with an estimated $18.02 million. The modestly budgeted disaster film debuted towards the higher end of its modest pre-release expectations and performed respectably given the combined performances of Teenage Mutant Ninja Turtles and Guardians of the Galaxy. The film opened 74 percent stronger than the $10.34 million launch of fellow disaster film Pompeii earlier this year.

Into the Storm grossed $6.52 million on Friday (which included an estimated $0.8 million from evening shows on Thursday), decreased a slim 2 percent on Saturday to gross $6.38 million and is estimated to fall 20 percent on Sunday to gross $5.12 million. That gives the film an estimated opening weekend to Friday ratio of 2.76 to 1. The audience breakdown for Into the Storm skewed towards female moviegoers (58 percent) and heavily towards moviegoers over the age of 25 (71 percent). Like Teenage Mutant Ninja Turtles, Into the Storm also received a so-so B rating on CinemaScore.

The Hundred-Foot Journey also opened in line with its modest expectations this weekend with an estimated fourth place debut of $11.12 million. The modestly budgeted drama from Disney and DreamWorks served as counter-programing to all of the fan-driven event films currently in the marketplace. The Hundred-Foot Journey opened slightly ahead of the $10.52 million start of Million Dollar Arm earlier this year.

The Hundred-Foot Journey opened with an estimated $3.65 million on Friday, increased 18 percent on Saturday to gross $4.30 million and is estimated to fall 26 percent on Sunday to gross $3.17 million. That gives the film an estimated opening weekend to Friday ratio of 3.05 to 1. The audience breakdown for the film skewed towards female moviegoers (59 percent) and heavily towards moviegoers 26 years and older (87 percent). The Hundred-Foot Journey received a strong A rating on CinemaScore and will hope to hold up well throughout the month of August, in part from continuing the serve as counter-programming to the month's current and upcoming fan-driven releases.

Universal's Lucy rounded out the weekend's top five with an estimated $9.33 million. The modestly budgeted sci-fi action film starring Scarlett Johansson was down 49 percent from last weekend. While the film's holding power thus far hasn't been the greatest, Lucy continues to exceed expectations and is now on the verge of reaching the $100 million domestic milestone with a 17-day take of $97.35 million.

Lionsgate's Step Up All In was off to a disappointing sixth place start with an estimated $6.58 million. The fifth installment of the dance film franchise debuted below its already modest expectations and a disappointing 44 percent below the $11.73 million debut of 2012's Step Up Revolution. Step Up All In received a B+ rating on CinemaScore. It should be noted that the film is performing significantly stronger overseas than it is domestically.

Saturday Update: Paramount reports that Teenage Mutant Ninja Turtles grabbed an estimated $25.6 million on Friday, including Thursday's $4.6 million preview grosses. Topping G.I. Joe: The Rise of Cobra's $22.2 million opening day, this is an impressive start for the franchise's live action reboot--particularly when considering the tough competition from Guardians of the Galaxy. Based on Friday's performance and the likelihood of Turtles playing fairly well during Saturday matinees, BoxOffice projects a $62 million opening weekend.

Comparatively, Turtles is certainly beating most pre-release expectations--especially those months in advance. Despite questionable buzz from the older fan base and online crowd for the better part of a year (or more), Paramount's marketing team successfully pitched the flick as a nostalgia trip worth taking for 20- and 30-somethings that grew up on the franchise. Megan Fox added some helpful star recognition, and the generally disappointing slate of family movies this summer likely helped give Turtles an extra edge. Early word of mouth appears mixed with a 64 percent Flixster audience score, while CinemaScore rang up a "B". Paramount notes that kids alone gave the flick an "A" CinemaScore. The audience was male-heavy (61 percent) and skewed over the age of 25 (55 percent). The official production budget was $125 million.

Meanwhile, Disney/Marvel's Guardians of the Galaxy posted a solid hold despite the glut of new releases this weekend. The tenth flick in the MCU posted $12.335 million yesterday, off 67 percent from opening day and enough to make it the best second Friday gross by any film this summer. By comparison, Captain America: The First Avenger slipped 69 percent from its first to second Friday in 2011. With $146.73 million in the bank after 8 days, Guardians trails the pace of Transformers: Age of Extinction (whose second Friday landed on Independence Day) by just 1.5 percent now and leads Captain America: The Winter Soldier by 13 percent. BoxOffice projects an strong $40 million sophomore frame for Guardians.

Warner Bros.' Into the Storm whirled up $6.51 million on Friday, a healthy start considering the crowded market. BoxOffice projects the film could net a healthy $17.5 million weekend from there. Early word of mouth, unfortunately, looks shaky: audiences gave the pic a "B" CinemaScore, while Flixster users have given it a 60 percent approval thus far.

The Hundred-Foot Journey started on a positive note with $3.65 million on opening day. The counter-programming option for adults is capitalizing on marketing's emphasis of Steven Spielberg and Oprah Winfrey as producers of the somewhat popular book adaptation. BoxOffice is projecting an $11 million opening. The modest $20-25 million production budget of the flick means it should earn back expenses in the long run if it holds up like past late summer fare such as Hope Springs, Julie & Julia, and Eat Pray Love. Hundred-Foot boasts an encouraging 83 percent Flixster score as of this morning.

Unfortunately, Step Up All In set a franchise low with its $2.84 million opening day--down 42 percent from 2012's Step Up Revolution ($4.93 million). BoxOffice projects the fifth entry in the series to net $6.75 million this weekend (down from its predecessor's $11.7 million). The film carries a disappointing 67 percent Flixster score.

Friday Update #2: Sources report Teenage Ninja Mutant Turtles is over-performing and could ring up $20 million or more today. If these early projections hold, the film would be in store for a weekend in the upper-$40 million range, very possibly exceeding $50 million depending on how well word of mouth proves to be among the film's older crowd.

If Turtles does hit that high, Guardians of the Galaxy will have to settle for the runner-up spot this weekend. Either way, it's reported to be holding well in its sophomore frame with a weekend north of $40 million being a safe bet.

Meanwhile, Into the Storm is pacing for a weekend in the mid-teens based of a projected $5.5 million to $6 million Friday. The Hundred-Foot Journey is doing well as it leads Step Up All In so far today with $4 million versus $3 million for respective weekends around $13 million and $7 million.

Friday Update #1: Sources report that Teenage Mutant Ninja Turtles bagged $4.6 million from Thursday evening shows. That's a strong start to the weekend as Paramount hopes nostalgia-driven young adults turn out to the theaters over the weekend with the next generation of Turtle fans in tow. By comparison, The Wolverine earned $4.0 million from Thursday shows last summer as part of a $53 million weekend. We expect Turtles to prove a little more front-loaded, but either way, it's shaping up for a close battle for first place against Disney/Marvel's Guardians of the Galaxy.

Meanwhile, Warner Bros. reports that Into the Storm took in $800,000 from its early shows last night. Given the film's non-franchise status and lack of marquee cast names, comps are few and far between. Among this year's live action releases, though, Need for Speed earned $1.1 million on Thursday night back in March. Last year, Elysium bowed to $1.6 million.

Tags: Teenage Mutant Ninja Turtles, Into the Storm, Step Up All In, The Hundred-Foot Journey, Guardians of the Galaxy, north-america