North America: 'Teenage Mutant Ninja Turtles' ($3.514M) Inches Past 'Guardians of the Galaxy' ($3.511M) in a Very Close Race for First on Tuesday 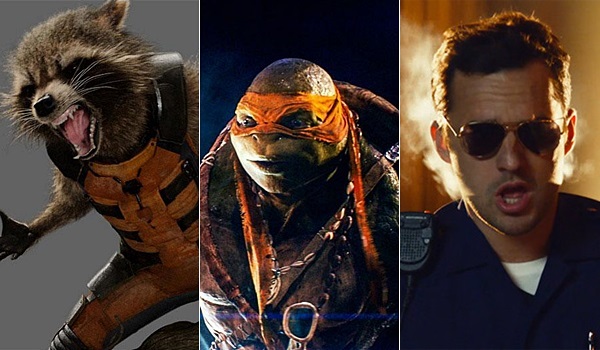 Disney's Guardians of the Galaxy was down one spot from Monday to place in a very close second with $3.511 million. The blockbuster sci-fi superhero adaptation from Marvel increased 22 percent over Monday and was down 47 percent from last Tuesday. Guardians of the Galaxy has grossed a stronger than expected $229.06 million in 19 days. That currently ranks the film as the sixth highest grossing release of 2014 thus far and the film will soon surpass X-Men: Days of Future Past to move into fifth place for the year.

Fox's Let's Be Cops held steady in third with $2.51 million. The low-budget action-comedy was up 19 percent over Monday, which represented one of the day's smaller daily increases among wide releases. Let's Be Cops surpassed the $30 million mark on Tuesday and has grossed a very solid $30.83 million in its first seven days. That is towards the lower end of pre-release expectations and places the film 22 percent behind the recent $39.45 million seven-day take of Tammy.

Lionsgate's The Expendables 3 took in $1.62 million to remain in fourth place. The third installment of the ensemble action franchise starring Sylvester Stallone was up a solid 23 percent over Monday, but still continues to disappoint in the bigger picture. The Expendables 3 has grossed $18.82 million in five days, which places it a sizable 46 percent behind the $34.61 million five-day start of 2012's The Expendables 2.

The Giver rounded out Tuesday's top five with $1.57 million. The young adult sci-fi adaptation from The Weinstein Company increased 20 percent over Monday's performance. With a five-day start of $15.19 million, The Giver is running towards the low end of expectations and 18 percent ahead of the $12.83 million five-day take of last year's The Host.