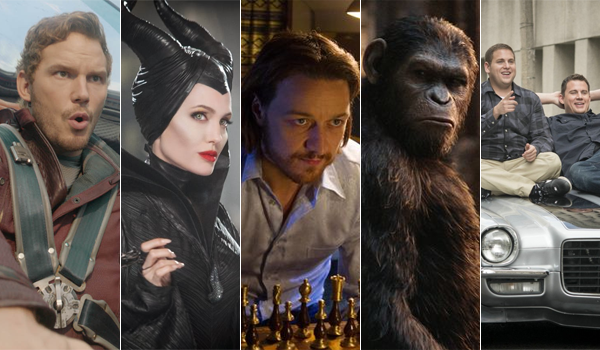 If ever a summer movie season could be described as a mixed bag, it was this one.

Summer 2014's box office haul topped out at an estimated $4.03 billion--down 14 percent from last year's record $4.69 billion. This marks the eighth consecutive year in which summer (defined in this review as May 1 through August 31) crossed the $4 billion threshold. Unfortunately, it was still the lowest since 2006's $3.64 billion.

The dog days closed on a high note, though: thanks mostly to Guardians of the Galaxy and Teenage Mutant Ninja Turtles, which combined for $438 million, the industry enjoyed its best August on record (not accounting for inflation) with $1.016 billion--the first time August has ever surpassed the billion dollar mark. That bests August 2013's previous record of $930 million.

The writing was on the wall after June dipped 16 percent from last year, followed swiftly by July's 29.5 percent year-over-year plunge. In fact, it was the first July to fall short of $1 billion since 2002's $961 million tally. Ultimately, for the first time since 1987, August grossed more than than the preceding July preceding--the only two such occurrences on record. (To be fair, a major component in July's weak turnout was due to Fast & Furious 7's delay following Paul Walker's tragic passing.)

While May itself also lost ground, its $1.01 billion still accounted for the fifth best non-adjusted May and generally strong openers throughout the month. It gets a pass.

The biggest stories of the summer emanated from the birth (or rebirth) of new franchises like Guardians, Turtles, and Godzilla, the revival success of X-Men: Days of Future Past, strong sequel performers in Dawn of the Planet of the Apes and 22 Jump Street, plus standalone hits in Maleficent, Neighbors, The Fault In Our Stars, and Lucy. Under-performers included Transformers: Age of Extinction, The Amazing Spider-Man 2, and arguably the most surprising, How to Train Your Dragon 2 (long considered a favorite to be the season's top earner).

Interestingly, this marks the first time that an August release "won" its summer. Given the proclivity of sequels to routinely top the charts, Guardians--the only film to claim first place three times this summer--also stands out by representing the season's first champ since 2003's Finding Nemo to feature a cast of characters never before seen on film. Once again, we see how originality still carries great appeal with moviegoers.

The Search for $300 Million

Through Labor Day, this was the first summer (and year-to-date overall) without a single $300 million earner since 2000's Mission: Impossible II ($215 million). That said, Guardians' impressive staying power has put it on course to topple that benchmark before the end of its run.

A Rare Off-Year for Animation

One notable takeaway this year was the lack of animated offerings, and the first absence of Pixar from the summer slate since 2005 (due to The Good Dinosaur's delay, announced nearly one year ago).

Following its predecessor's universal praise four years back, How to Train Your Dragon 2 represented the only tentpole animation this summer (Disney's Planes: Fire and Rescue was expected to perform modestly, as it did). That alone was cause for high expectations ahead of its June release, but once Turtles inevitably passes it on the chart, Dragon 2 will rank in tenth place among summer releases. Prior to 2014, at least one animated film cracked the top five for eight straight summers. 1998's Mulan (ninth place) was the last to rank so low.

Consider Dragon 2's strong reviews (92 percent on Rotten Tomatoes), word of mouth (92 percent Flixster score, "A" CinemaScore), and holding power (a respectable 3.48x multiple from opening weekend, stronger than Monsters University's 3.26 last year). One possible cause of the film's inability to capture a larger audience was its nature as a less comedic story than is typical of mega-grossers like the Shrek, Toy Story, and Despicable Me sequels.

Additionally, cash-strapped parents may still be reconciling their bank accounts after buying so many tickets to Frozen and The LEGO Movie earlier this year, not to mention last year's string of animated hits.

Reviews and audience word of mouth were largely positive for most tentpole releases. The average Rotten Tomatoes critics' and Flixster audience scores didn't vary by much from last summer, but among the top 10, four films scored over 90 percent on both sites this year (Guardians, X-Men, Apes, and Dragon). Last summer, only two films scored over 78 percent with critics (Star Trek Into Darkness - 87 percent, Despicable Me 2 - 74 percent) while Trek claimed the only Flixster score over 90 percent.

Studio bean-counters can rejoice over the fact that there were very few financial bombs along the lines of The Lone Ranger, After Earth, White House Down, R.I.P.D., or Turbo. For example, Tom Cruise's crowd-pleasing Edge of Tomorrow disappointed domestically, but strong word of mouth and overseas returns have strengthened its bottom line. The same applies to the Transformers, Amazing Spider-Man, and Dragon sequels, whose international revenues ensured overall financial prosperity for Paramount, Sony, and Fox, respectively--albeit, not on the level once hoped for regarding the latter two.

There's no questioning that Fox and Disney walk away with the most bragging rights. The latter boasts two of the top three films of summer (Guardians and Maleficent)--not to mention Captain America: The Winter Soldier's fantastic run prior to May. Meanwhile, Fox claimed four of the top twelve grossers--led by Bryan Singer's X-Men return and Matt Reeves' Apes sequel.

On the year, Fox currently has a slight 0.6 percent lead over Disney in market share among all studios.

Adjusting for inflation highlights more unsettling results: all things being equal, this summer was estimated as the least-attended in 22 years (based on dividing total grosses by today's average ticket price of $8.15). The last time summer saw fewer patrons enter cinema doors was 1992, when films like Batman Returns and Lethal Weapon 3 represented the biggest blockbusters.

Looking at year-to-date performance adjusted for inflation, the story doesn't improve much. 2014 has sold an estimated 124.7 million tickets through August--the lowest figure since 1995.

For those looking at Summer 2015, it could be a major rebound from this year. Universal gets things started in early April with Fast & Furious 7, followed shortly by May 1's hugely anticipated Avengers: Age of Ultron. Chris Pratt, fresh off LEGO and Guardians, could help drive Jurassic World to some success, while Pixar's Inside Out, Seth MacFarlane's Ted 2, Magic Mike 2, the Minions spin-off, and Marvel's Ant-Man (among others) should further contribute to a stronger June-July box office combo than this year mustered.

All in all, while Summer 2014's box office may not be one for the ages, it can simply be looked upon as the industry's financial ebb between more promising tides.