Cinebarre Opens its Doors in Boulder 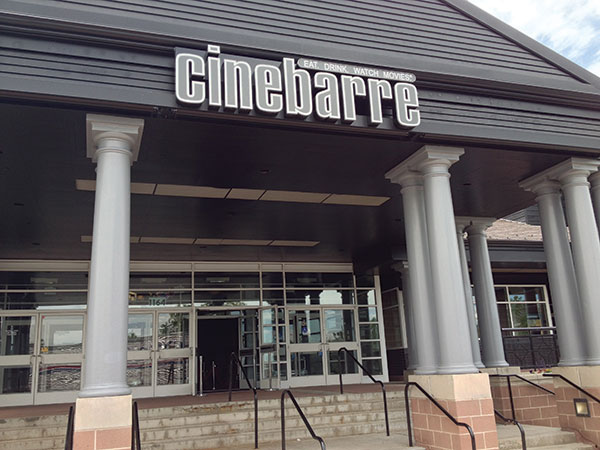 Twenty minutes southeast of Boulder, Colo., sits one of the most livable cities in the United States, if Money magazine is to be believed. Louisville is certainly noteworthy. It is the home of SNC Space Systems' Dream Chaser, the low-Earth-orbit vehicle that may be taking astronauts to the International Space Station later this decade. And now it is the home to one of the country's premiere cinema eateries-Cinebarre. And it is out of this world.

Entrepreneur Terrell Braly, in partnership with Regal Entertainment Group, is a grand showman. Texas tall, brash, and gregarious, Braly knows how to throw a party. On July 31, the Cinebarre CEO and chairman opened the doors to a just a few invited guests-over 600, in fact-to the newest in his family of cinema eateries and the second in Colorado. Braly and his crew-many of them family members-transformed the 20-year-old monster of a multiplex, formerly Regal Colony Square Stadium 12, into a cinema showplace in just 90 days.

Chad Rankin, Cinebarre's VP of construction, describes the process: "Total construction project time was under 12 weeks with two weeks being demolition. Any time you remodel a 40,000-plus-square-foot building at such an expeditious rate, you uncover several unforeseen special challenges. By adding a large commercial kitchen and two bars, the remodel takes several skilled people that must be on top of their game. The key is to surround yourself with good people that can take direction on the fly. I've found that managing projects of this scope and short time frame, one must be able to adapt and overcome many daily obstacles in order to stay on schedule. Some challenges are big and some are small, but they all must be treated the same because one little thing can have a domino effect on the entire project."

Rankin worked with Renew Urban Theatre of Charleston, South Carolina, who specialize in cinema eateries. Renew Urban's motto is "Graciousness," and that attitude was certainly exemplified in one of their installers, the charming Jonathan Crump, who was thrilled with the finished result. "Spectacular," he told us while sipping a well-earned CineBrew.

Cinebarre Boulder, as the theater is now called, is the eighth location Braly and his talented squad have opened in recent years. Cinebarre Mountlake Terrace (Wash.) was featured in these pages several years ago when it was named one of BoxOffice's Marquee Theaters. Cinebarre Boulder certainly lives up to that standard.

The black-and-silver-themed venue is lined with classic movie posters enlarged to gargantuan proportions and red-upholstered couches and chairs accompanied by black-and-silver storage trunks that double as coffee tables.

Braly says of his newest store, "We give the civilized, mature person the experience of watching a movie the way it was meant to be: in a full-service dinner-and-movie setting without the distractions of the standard ‘mall' movie theater."

VIP Night guest, Army Wives star Terry Serpico said, "Terrell and the staff at Cinebarre Mount Pleasant (S.C.) opened their doors to Army Wives and gave us a home to screen our season premieres. We'd have a red carpet and press line. A big party. The environment at Cinebarre made it feel old-Hollywood glamorous."

Guest Tuesday Bebbe said, "Cinebarre is our second home. We eat dinner and watch a movie once or twice a week. If it's not playing at Cinebarre, we wait for it to come out on DVD. Love the leather chairs and great food!"

The cinema eatery is a growing concept that more circuits are entertaining. Alamo Drafthouse Cinema, probably the most well-known cinema eatery in the country, was an in-theater dining pioneer. In 2005, Entertainment Weekly called it "The Best Theater in America." The CEO at the time? Terrell Braly. The man knows how to put on a show. And a hell of a party.

Cinebarre CEO Terrell Braly (center) celebrates with wine consultants Tom Smith and Elizabeth Smith during VIP Night. Founders of Wine News, the couple are working with the Cinebarre team to reimagine the theaters' wine lists. "We culled wines from the world's most distinguished regions," Elizabeth Smith says. "They met one or all of the following criteria: grown in a foremost appellation for the varietal; easy-drinking and accessible; and boasting an outstanding quality-to-value ratio." In addition to being a wine expert and fine art photographer, Tom won a Super Bowl ring with the 1973 Miami Dolphins.

There is nothing a food-service worker loves more than a brand-new kitchen. The Boulder facility is huge, having replaced one of the original auditoriums. Orders come in from either the bar or any of the screening rooms, are then prepared to order, and raced out by food runners who deliver the burgers, pizzas, and snacks to patrons at their seats. Theatergoers may order at any time-before or during the film. The full menu is also available to visitors who choose to just enjoy the bar. On Day One, the kitchen was in full fury as servers, runners, and cooks put their training to the test, as it was also the opening day of the megahit Guardians of the Galaxy.

Cinebarre Boulder's circular bar is the centerpiece of the poster-festooned lobby. In addition to the central bar there is a service bar dedicated to making cocktails for in-theater filmgoers. In addition to General Manager Matty DesMarias, several members of the Mountlake Terrace, Washington, Cinebarre crew traveled to Boulder to help train and prepare the new staff. With VIP Night featuring a hosted bar, the bartenders were tested by fire as the event drew 660 thirsty guests including Cheers! regulars Norm and Cliff (actors George Wendt and John Ratzenberger), who kindly posed for photos with fans.

Cinebarre Boulder's maximum capacity is approximately 860. The 11 auditoriums range in size from 46 to 143 seats. The original stadium seats were removed for the renovation and replaced with new Signature Rockers from Irwin Seating Company. To accommodate dining, every other row of the original seats have been replaced with long dining tables, which has the additional benefit of providing substantial legroom. Lighting in the auditoriums is precisely controlled to ensure not only a great moviegoing experience, but to allow patrons to clearly read the menu, see their drinks, and ensure that the food runners can see where they're going.

The menu features pub fare with flair-chicken fingers are Goldfingers, the club sandwich has been dubbed Fight Club, sliders are Slideways, and the pepperoni pizza is The Italian Job. For the popcorn fan there is Children of the Popcorn, while the tub of corn tossed with fresh rosemary is called, of course, Rosemary's Baby. Fancy a cinnamon roll? Try the Princess Leia, so named for reasons only a Star Wars nerd will understand. In addition to wine and specialty cocktails, the theater also has its own branded beers, CineBrew and CineBeer. And with the Denver-Boulder area renowned for its microbrews, it's no surprise the beer list is top notch.

VP of Creative Affairs Vanessa Rankin has concocted a preshow that is unique to the Cinebarre experience. Filmmakers from around the globe submit short films to Cinebarre's Vimeo page with the very best selected for the preshow. A new preshow is assembled each month and uploaded to Cinebarre's FTP server so each theater can download and ingest into their film servers. Films are between three and seven minutes in length, while the entire preshow is 30 minutes. Since many of the theaters allow children, the selected films must be G or PG. Animation is popular, and many student films have made the cut.