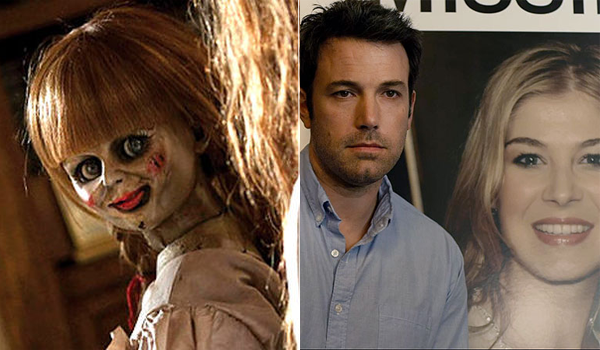 This story was originally published September 23, 2014.

The final quarter of 2014 is just around the corner, and it will begin with the release of two promising titles on October 3.

David Fincher's Gone Girl has been the subject of strong early praise from critics, hinting at another likely awards contender for the veteran director. Fincher's become an awards circuit staple over the past half-decade thanks to The Curious Case of Benjamin Button, The Social Network, and The Girl with the Dragon Tattoo. Led by stars Ben Affleck and Rosamund Pike, his latest is primed to attract adult audiences looking for an A-list thriller this autumn.

Gone Girl's social media footprint has noticeably grown in recent weeks as industry insiders gush over the film, set to open the New York Film Festival on September 26. As of Tuesday, Girl's total number of Twitter mentions paced on par with No Good Deed (which recently opened to a strong $24.3 million) at the same point before release. We should expect the online audience to drive up such numbers thanks to Fincher's cinephile fan base, but signs already support an opening north of Affleck's Argo ($19.5 million in October 2012) and close to the mid-$20 million range. That number could go higher if buzz keeps escalating over the next ten days.

Gone Girl will have to contend against another major release, though. Following the critical and commercial success of last year's The Conjuring, Warner Bros. has wisely spun off that film's creepy supporting doll into her own flick, Annabelle. October has proven its fruitfulness for the horror genre with past franchises like Paranormal Activity, Saw, and (briefly) The Grudge--owing to fans' strong appetite for scares when Halloween is approaching. Goodwill from The Conjuring, which earned a stellar $137.4 million domestically in Summer 2013, should give this spiritual follow-up an advantage out of the gate.

In fact, Annabelle is more than tripling the Twitter activity of Paranormal Activity: The Marked Ones and Oculus, which stand as 2014's top horror openers ($18.3 million and $12 million, respectively). With over 75,000 mentions since September 17, it's the most tweeted-about upcoming release not named The Hunger Games: Mockingjay Part 1. Facebook buzz has also impressed as Annabelle crossed the million-fan benchmark one month before release, while it currently leads all upcoming releases in new fans over the past week.

Without question, it's been a slow year for horror after The Conjuring and Insidious Chapter 2, both directed by genre aficionado and Annabelle producer James Wan, marked a banner year for the genre at the box office in 2013. Modest-to-disappointing runs by As Above/So Below, Deliver Us from Evil, and The Quiet Ones over the last five months have increased the perception that we're due for a hit. Annabelle--with an effectively creepy ad campaign--looks like the one to snap the dry spell.

The lack of carryover characters/actors from Conjuring could hold it back from the kind of stunning $40 million+ debuts enjoyed by the Paranormal Activity and Insidious sequels, but don't be surprised if Annabelle makes a run for $25 million to $30 million or more on opening weekend in what's shaping up to be a close race for the top spot over the October 3 frame.