NORTH AMERICA: Studio Estimates: 'The Equalizer' Impresses with $35.0M Start; 'The Maze Runner' Holds Up Well with $17.5M; 'The Boxtrolls' Debuts in Third with Solid $17.25M 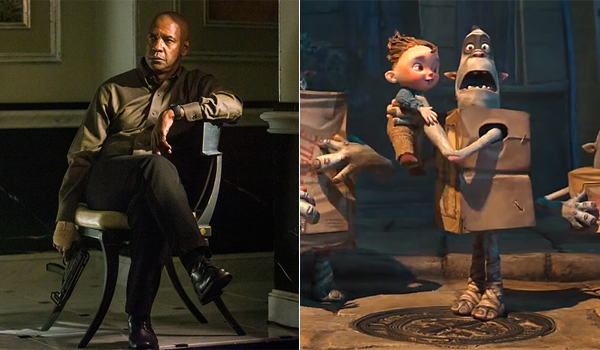 Sony's The Equalizer debuted in first place this weekend with a strong estimated start of $35.0 million. The action thriller starring Denzel Washington debuted on the higher end of pre-release expectations, which were lofty, especially for the month of September. Without adjusting for ticket price inflation, The Equalizer delivered the fourth largest opening weekend ever for the month of September (behind only 2012's Hotel Transylvania, 2013's Insidious Chapter 2 and 2002's Sweet Home Alabama). The film's debut represented the third largest opening weekend performance ever for Washington (behind only 2007's American Gangster and 2012's Safe House). The Equalizer opened 7 percent stronger than the $32.79 million start of 2010's The Book of Eli and 13 percent below the $40.17 million start of Safe House.

The Equalizer opened with $12.6 million on Friday (which included an estimated $1.5 million from Thursday night shows), increased 8 percent on Saturday to gross $13.6 million and is estimated to decline 35 percent on Sunday to take in $8.8 million. That places the film's estimated opening weekend to Friday ratio at 2.78 to 1. The audience breakdown for the film skewed slightly towards male moviegoers (52 percent) and towards moviegoers 30 years and older (65 percent). The Equalizer received an A- rating on CinemaScore, which is an encouraging sign for the film going forward.

The Maze Runner placed in second with an estimated $17.5 million. The young adult adaptation from Fox held up relatively well this weekend, as it was down 46 percent from last weekend's strong start. The Maze Runner has grossed $58.02 million in ten days and continues to display strong early holding power for a young adult adaptation. Thanks in part to a significantly stronger second weekend hold, The Maze Runner is now running 32 percent ahead of the $44.01 million ten-day take of last year's Ender's Game and is already on the verge of reaching the $61.74 million final domestic gross of Ender's Game.

The Boxtrolls was off to a very solid third place start this weekend with an estimated $17.25 million. The latest 3D stop motion animated film from Focus and Laika debuted a bit above pre-release expectations. Compared to previous films from Focus and Laika, The Boxtrolls opened 22 percent ahead of the $14.09 million start of 2012's ParaNorman and a slim 2 percent ahead of the $16.85 million start of 2009's Coraline. ParaNorman and Coraline both displayed terrific holding power and going forward The Boxtrolls will hope to accomplish the same.

The Boxtrolls opened with $4.93 million on Friday, increased a strong 51 percent on Saturday to gross $7.47 million and is estimated to decline 35 percent on Sunday to gross $4.85 million. That places the film's estimated opening weekend to Friday ratio at 3.50 to 1. The audience breakdown for the film skewered towards female moviegoers (57 percent). The Boxtrolls received a solid B+ rating on CinemaScore.

Warner's This Is Where I Leave You placed in fourth with an estimated $7.01 million. The modestly budgeted comedy starring Jason Bateman and Tina Fey held up well this weekend, as it was down 39 percent from last weekend's so-so start. This Is Where I Leave You has grossed $22.56 million in ten days. That places the film 13 percent behind the $25.94 million ten-day start of 2011's The Change-Up (which fell 53 percent in its second weekend to gross $6.31 million).

Fellow Warner Bros. release Dolphin Tale 2 rounded out the weekend's top five with an estimated $4.84 million. The family film sequel was down 45 percent from last weekend, as the film appears to have taken a bit of a hit from The Boxtrolls arriving in the marketplace. Dolphin Tale 2 has grossed $33.67 million in 17 days. The film is currently running 31 percent behind the $49.04 million 17-day take of 2011's Dolphin Tale and is displaying significantly softer holding power.

No Good Deed followed in sixth with an estimated $4.6 million. Sony's low-budget thriller starring Idris Elba and Taraji P. Henson was down 53 percent. No Good Deed continues to be very front-loaded, but has still grossed a healthy $46.62 million in 17 days.

Universal's A Walk Among the Tombstones was down five spots and a massive 67 percent from last weekend with an estimated seventh place take of $4.23 million. Lackluster word of mouth and the new direct competition from The Equalizer both had a negative effect on the Liam Neeson led action thriller this weekend. A Walk Among the Tombstones is running a bit below expectations with a ten-day start of $20.87 million.

Guardians of the Galaxy was down just 28 percent to place in eighth with an estimated $3.79 million. In the process, the blockbuster sci-fi superhero film from Disney and Marvel surpassed the $318.41 million final unadjusted gross of 2008's Iron Man. Guardians of the Galaxy has grossed a massive $319.19 million through 59 days of release.

Sony reports that The Equalizer bagged a strong $12.6 million first day, including Thursday's $1.5 million opening night grosses. That tops the $9.94 million bow of Denzel Washington's previous actioner, last year's 2 Guns ($9.94 million), as well as director Antoine Fuqua's Olympus Has Fallen ($10.06 million). Positive buzz throughout the industry had been building for the film months in advance, leading to Sony's pre-release greenlighting of a sequel. Early word of mouth is very positive with an 81 percent Flixster score, significantly stronger than the film's 58 percent Rotten Tomatoes rating from critics. BoxOffice projects a $38 million opening weekend, while all signs point to a leggy run for the crowd-pleasing thriller.

Focus Features reports that Laika's The Boxtrolls took in $4.9 million on Friday, a great start for the stop-motion-CG hybrid animation in a market that needed another family offering. Laika was previously responsible for the well-received flicks Coraline and ParaNorman, which earned $4.5 million and $4.6 million opening days in 2009 and 2012, respectively. As an additional comparison, Tim Burton's Frankenweenie pulled a $3.3 million opening day two Octobers ago. Critics have awarded the film a positive 71 percent score on Rotten Tomatoes, while early audience reception is similarly encouraging with a 76 percent Flixster score. BoxOffice projects a $16.8 million opening frame.

Fox reports that The Maze Runner eased 54 percent from opening day last week to $5.2 million on Friday. Through 8 days of release, the hit young adult adaptation has earned $45.7 million domestically--25 percent ahead of the pace of Ender's Game. BoxOffice projects a healthy $18 million sophomore frame.

A Walk Among the Tombstones was off 73 percent from its first Friday to $1.3 million yesterday. The noirish Liam Neeson thriller was certainly hit by new competition from The Equalizer. With $17.9 million in the bank after 8 days, the film is unfortunately pacing 37 percent behind The Grey. BoxOffice projects a $4.2 million second weekend.

Warner Bros.' This Is Where I Leave You took in $2.2 million to start its second weekend, down 43 percent from its first Friday. The dramedy's total now stands at $17.75 million, 4 percent behind the pace of Trouble with the Curve. BoxOffice projects a $7 million sophomore weekend.

Meanwhile, Guardians of the Galaxy continues its march toward becoming the highest grossing Marvel Cinematic Universe release not named The Avengers or Iron Man 3. The year's biggest blockbuster so far added $1.02 million on Friday, bringing its total domestic earnings to $316.4 million. Guardians continues to run 3 percent ahead of the pace of Iron Man, whose $318.4 million final gross will be surpassed sometime late Saturday or early Sunday. BoxOffice projects a $3.9 million weekend.

Friday Afternoon Report: Sources tell BoxOffice that The Equalizer is headed for a debut over $35 million. Sony's confidence in the film is now justified. If word of mouth is strong enough, the action flick could end up reaching $40 million.

The Boxtrolls looks to be on pace for a modest $15 million.

Friday Morning Update: Sources report that The Equalizer got off to a very healthy start Thursday night, generating $1.5 million from 7pm shows onward.

By comparison, fellow Denzel Washington pic 2 Guns pulled a $1.28 million Thursday as part of its $27.1 million opening weekend in August of last year. Based on last night's performance, solid early buzz for the film, and strong pre-sales on Fandango, The Equalizer is well-positioned to open north of $30 million.

Unfortunately, Thursday night grosses for The Boxtrolls weren't yet available at the time of publishing.

Check back later today for a preliminary Friday report.

Tags: The Maze Runner, The Equalizer, The Boxtrolls, north-america