NORTH AMERICA: 'Fury' Continues to Hold Up Well on Tuesday with $2.84M; 'Gone Girl' Remains Strong in Second with $1.79M 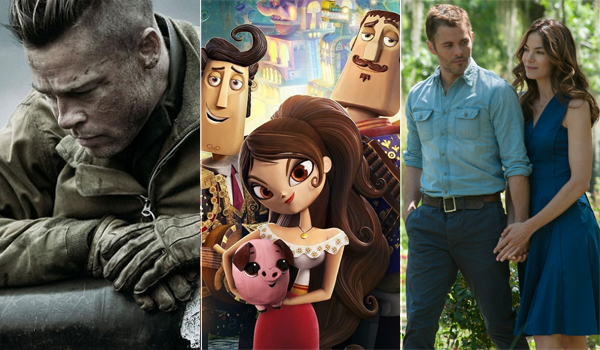 Sony's Fury grossed $2.84 million on Tuesday to lead the daily box office for a fifth consecutive day. The David Ayer directed World War II film starring Brad Pitt was up a healthy 20 percent over Monday. After being a bit front-loaded over the weekend, Fury has been holding up nicely so far during the midweek. Fury has grossed $28.89 million in five days. That is towards the lower end of expectations and places the film 12.5 percent ahead of the $25.67 million five-day start of Sony's The Monuments Men earlier this year.

Fox's Gone Girl held steady in second place with $1.79 million. The critically acclaimed David Fincher directed film starring Ben Affleck increased 23 percent over Monday and was down a very solid 36 percent from last Tuesday. Gone Girl has grossed a very impressive $110.02 million in 19 days. That places the film 75 percent ahead of the $62.89 million 19-day take of 2012's Argo.

Warner's The Judge was up two spots and a very strong 45 percent over Monday to take third on Tuesday with $0.995 million. It was a very tight race for places third through sixth on Tuesday, as only $93,996 separated third place from sixth place. The Judge was down 38 percent from last Tuesday and has grossed $28.50 million in twelve days, which is towards the lower end of expectations.

Dracula Untold followed closely behind in fourth with $0.985 million. Universal's action horror film starring Luke Evans was up 19 percent over Monday and down 50 percent from last Tuesday. Dracula Untold has grossed a stronger than expected $42.65 million in twelve days, but continues to display signs of being significantly front-loaded.

Fox's The Book of Life was down two spots from Monday to round out Tuesday's top five with $0.948 million. The modestly budgeted 3D computer animated film was up 13 percent over Monday, as family films in general didn't hold up as well as films aimed at adults on Tuesday. The Book of Life has grossed $18.79 million in five days. The film continues to perform in line with expectations and very similarly to The Boxtrolls out of the gate, which grossed $18.87 million during its first five days.

Relativity's The Best of Me took in $0.900 million to remain in sixth. The Nicholas Sparks adaptation starring Michelle Monaghan and James Marsden increased 33 percent over Monday's performance. The Best of Me continues to perform on the low end of its modest expectations (and softly for a Sparks adaptation) with a five-day start of $11.58 million.

On the platform front, Fox Searchlight's Birdman continued to impress with $51,664 from 4 locations. That represented a 5 percent decline from Monday and gave the critically acclaimed Alejandro González Iñárritu directed film starring Michael Keaton a massive per-location average of $12,916 for the day. Birdman has grossed $530,405 through five days of platform release and is set to open in additional locations on Friday.

Tags: north-america, Birdman, The Best of Me, The Book of Life, Dracula Untold, The Judge, Gone Girl, Fury