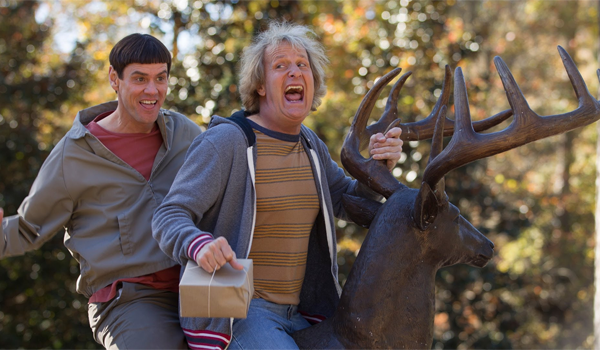 LOS ANGELES - November 12, 2014 - According to Fandango, the nation's leading moviegoer destination, the Jim Carrey-Jeff Daniels comedy sequel "Dumb and Dumber To" is a no-brainer for moviegoers this weekend, representing more than 50% of Fandango's weekend wide release sales and scoring a bright 86 out of 100 points on the company's Fanticipation movie buzz indicator. "Dumb and Dumber Too" is currently outselling last year's irreverent comedies, "Anchorman 2" and "We're the Millers," at the same point in the Fandango sales cycle.

According to a survey of more than 1,000 "Dumb and Dumber To" ticket-buyers on Fandango:
95% of moviegoers have seen the first film (but only 47% of them saw it on the big screen);

89% will see the film with a best friend or group of friends;

87% said they would not have seen "Dumb and Dumber To" if either actor had not returned;

86% have been looking forward to a sequel ever since the first film;

77% are fans of the film's directors, The Farrelly Brothers.

"It's rare to see so much anticipation for a sequel to a twenty-year-old movie," says Fandango Chief Correspondent Dave Karger. "Fans of the first movie will be happy to see Carrey and Daniels together again, and even those moviegoers who are too young to remember the first movie will enjoy its riotous silliness."

In a creative original video, "Dumb and Dumber To: How Much Would it Cost", Fandango Movieclips calculates the cost of taking a Harry & Lloyd-style cross-country road trip, as portrayed in the first "Dumb and Dumber" movie.

Also premiering exclusively on Fandango, the brand-new trailer for 20th Century Fox's highly-anticipated "Night at the Museum: Secret of the Tomb," starring Ben Stiller, Owen Wilson, Rebel Wilson, the late Robin Williams and a star-studded cast, debuts today. Opening in theaters on December 19, 2014, the new "Museum" trailer can be found at http://youtu.be/i0vTJeYLRnA.


About Fandango's Fanticipation
Known for having its finger on the pulse of moviegoers, Fandango's movie buzz indicator, Fanticipation, provides statistical insight into the movies fans are planning to see in a given weekend. Fanticipation scores (based on a 1 to 100-point scale) are calculated via an algorithm of Fandango's advance ticket sales, website and mobile traffic, and social media engagement. Fanticipation is not intended as a forecast of the weekend box office; it is a snapshot of movie fan sentiment.