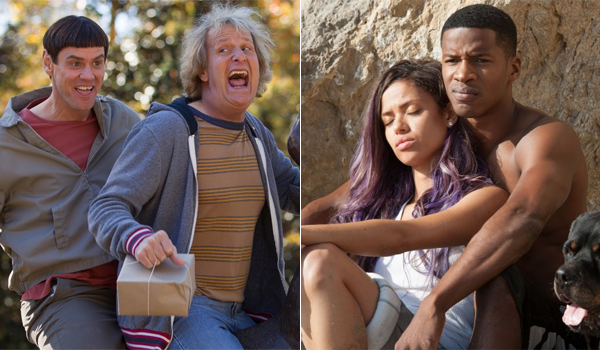 Sunday Report: Universal's Dumb and Dumber To took in an estimated $38.05 million this weekend to claim first place. The long awaited comedy sequel starring Jim Carrey and Jeff Daniels outpaced Big Hero 6 by an estimated $2.04 million for the frame, in what turned out to be a close race for first place. Dumb and Dumber To exceeded expectations this weekend, as the film proved to be critic-proof. Pre-release online buzz for the film had been relatively soft as well, but fans of the original 1994 film clearly showed up in a big way on opening weekend. Dumb and Dumber To represented the largest live-action debut for Carrey since the $67.95 million debut of Bruce Almighty back in 2003. For a number of reasons, box office comparisons are tough to make to Carrey's more recent films. Dumb and Dumber To did open an impressive 19 percent ahead of the $32.06 million start of last year's Jackass Presents: Bad Grandpa.

Dumb and Dumber To opened in first place on Friday with $14.2 million (which included $1.6 million from Thursday night shows), decreased a slim 2 percent on Saturday to fall to second with $13.9 million and is estimated to fall 28 percent on Sunday to gross $9.95 million. That places the film's estimated opening weekend to Friday ratio at a very respectable 2.68 to 1. The film did receive a lackluster B- rating on CinemaScore, which along with a fan-driven opening weekend, could signal front-loading going forward, though that remains to be seen. The audience breakdown for the film skewed towards male moviegoers (55 percent) and towards moviegoers 25 years and older (57 percent).

Disney's Big Hero 6 placed in a close second with an estimated $36.01 million. The 3D computer animated film from Walt Disney Animation Studios held up well this weekend, as it declined a healthy 36 percent from last weekend's strong start. Big Hero 6 surpassed the $100 million mark this weekend and has now grossed $111.65 million through ten days of release. That is in line with the film's lofty pre-release expectations and places Big Hero 6 19 percent ahead of the $93.65 million ten-day take of 2014's Wreck-It Ralph (which fell 33 percent in its second weekend to gross $33.01 million). Big Hero 6 represents another strong recent performer for Walt Disney Animation Studios, joining the likes of Wreck-It Ralph, 2010's Tangled and last year's Frozen. The film will likely continue to hold up well throughout the holiday season.

Also holding up well this weekend was Paramount's Interstellar. The high-profile Christopher Nolan directed sci-fi film was down an encouraging 39 percent from last weekend's lower than expected debut to place in third with an estimated $29.19 million. This weekend's hold was especially encouraging given the new competition the film faced for older moviegoers from Dumber and Dumber To. Interstellar is being helped out by its continued strong IMAX grosses, from good word of mouth and from its long running time and older-skewing audience leading to some natural back-loading. Interstellar is on the verge of reaching the $100 million mark with $97.81 million after ten days of wide release. It should be noted that Interstellar has fallen further behind the pace of last year's Gravity. Interstellar is now running 20 percent behind the $122.32 million ten-day take of Gravity (which fell just 23 percent in its second weekend to gross $43.19 million).

Beyond the Lights opened in fourth place this weekend with an estimated 6.5 million. Despite strong reviews and strong pre-release online buzz levels, the low-budget drama from Relativity opened below expectations. Beyond the Lights debuted 13 percent below the recent $7.49 million start of Addicted (which opened in significantly fewer locations). Beyond the Lights started out with $2.3 million on Friday, increased 14 percent on Saturday to gross $2.63 million and is estimated to decline 40 percent on Sunday to gross $1.57 million. That places the film's estimated opening weekend to Friday ratio at 2.83 to 1. That is an early encouraging sign when it comes to potential holding power, as is the film's strong A rating on CinemaScore.

Fox's Gone Girl rounded out the weekend's top five with an estimated $4.63 million. In the process, the critically acclaimed David Fincher directed film surpassed the $150 million domestic mark this weekend. Gone Girl continues to display terrific holding power, as it was down just 25 percent from last weekend. The 45-day total for the film stands at $152.699 million.

Upon expanding into wider release, Fox Searchlight's Birdman claimed tenth place with an estimated $2.45 million. That was up a slim 6 percent from last weekend and gave the Alejandro González Iñárritu directed awards season hopeful starring Michael Keaton a modest per-location average of $2,859 from 857 locations. After a very strong platform start, Birdman has been unable to maintain momentum as it has expanded into wider release. With that said, the film has still grossed a very respectable $11.58 million to date and will hope to stick around throughout the awards season.

Sony Pictures Classics' Foxcatcher was off to a more encouraging start in platform release with an estimated $288,113 from 6 locations. That gave the Bennett Miller directed awards season hopeful starring Steve Carell and Channing Tatum a healthy per-location average of $48,019 for the frame.

Elsewhere in platform release, Focus' The Theory of Everything held up nicely with an estimated $738,000 from 41 locations. That gave the James Marsh directed awards season hopeful a strong per-location average of $18,000 for the frame.

Saturday Report: Universal reports that Dumb and Dumber To claimed first place on Friday with a strong $14.2 million opening day. That marks the best first-day take for a live action Jim Carrey flick since 2003's Bruce Almighty ($20.1 million), while also topping his voice-led Dr. Seuss' Horton Hears A Who ($13.3 million). For similar genre comparisons, the Dumber sequel also topped Bad Grandpa's $12.6 million opening day just over a year ago. Clearly, 90s nostalgia worked for this flick as Universal's ad campaign successfully interested many 20- and 30-somethings who grew up quoting the now-classic original 1994 film.

Unfortunately, though, word of mouth could be an issue this time around. Aside from an expected critical disapproval (27 percent on Rotten Tomatoes), the film's 63 percent Flixster audience score is concerning. By comparison, Anchorman: The Legend Continues stood at 72 percent one day after its Wednesday release last December--and that film didn't have a slew of comedies to contend with in subsequent weeks as Dumber To will throughout the holidays. Still, there's no questioning the success of this opening for a sequel whose production budget was a rumored (and modest) $35 million or so. BoxOffice projects the film will make that back by Sunday with a projected $36 million opening weekend.

Christopher Nolan's Interstellar was off 50 percent from last Friday (its wide opening day) to $8.3 million yesterday. By comparison, Gravity declined just 28 percent from its first-to-second Friday last fall, while Skyfall posted a 60 percent Fri-to-Fri drop. Nolan's space epic has accumulated $76.9 million to-date now and is projected to earn $27.9 million over its second weekend.

Disney's Big Hero 6 held up very well to begin its second weekend. The well-reviewed, and well-received, animation was off 49 percent from opening day last week to $8.01 million yesterday. That gives the pic $83.655 million through 8 days of release, 22 percent more than Wreck-It Ralph totaled through the same point. BoxOffice is projecting a $33.6 million sophomore frame.

Rounding out Friday's top five, Gone Girl added another $1.35 million to boost its domestic total to $149.4 million. Look for a weekend around $4.4 million.

Jon Stewart's directorial debut, Rosewater, opened to $422,000 from 371 locations on Friday. The per-theater average was $1,137. BoxOffice projects the film will pull around $1.3 million for its opening weekend.

Unfortunately, opening day grosses for Foxcatcher were not available at the time of publishing.

Friday Report: Sources tell BoxOffice that Dumb and Dumber To is currently on pace for between $36 million-$39 million. If word of mouth is strong, the comedy could easily hit $40 million.

Beyond the Lights is looking at mediocre $6 million-$7 million debut.

Thursday Night Report: Sources report that Dumb and Dumber To bagged $1.6 million from Thursday evening shows. That's a generally healthy start for the long-gestating comedy sequel starring Jim Carrey and Jeff Daniels, although it does trail the $2.3 million Tuesday night start of Paramount's Anchorman: The Legend Continues last year (which debuted one week before Christmas). Fellow Universal comedy Neighbors pulled $2.56 million Thursday night gross as part of its $49 million opening weekend back in May.

Based on these early results, an opening weekend close to $30 million is on the table, potentially more if the 30-something audience shows up with a sense of nostalgia. The big question mark is whether or not the sequel will dethrone Big Hero 6 from first place, which has a good chance to repeat atop the chart thanks to strong reviews/word of mouth and no crossover audience with the Dumb sequel.

Check back later for an early report on Friday numbers.

Tags: north-america, Dumb and Dumber To, Big Hero 6, Interstellar, Beyond the Lights