Hispanics and Film: A Love Story 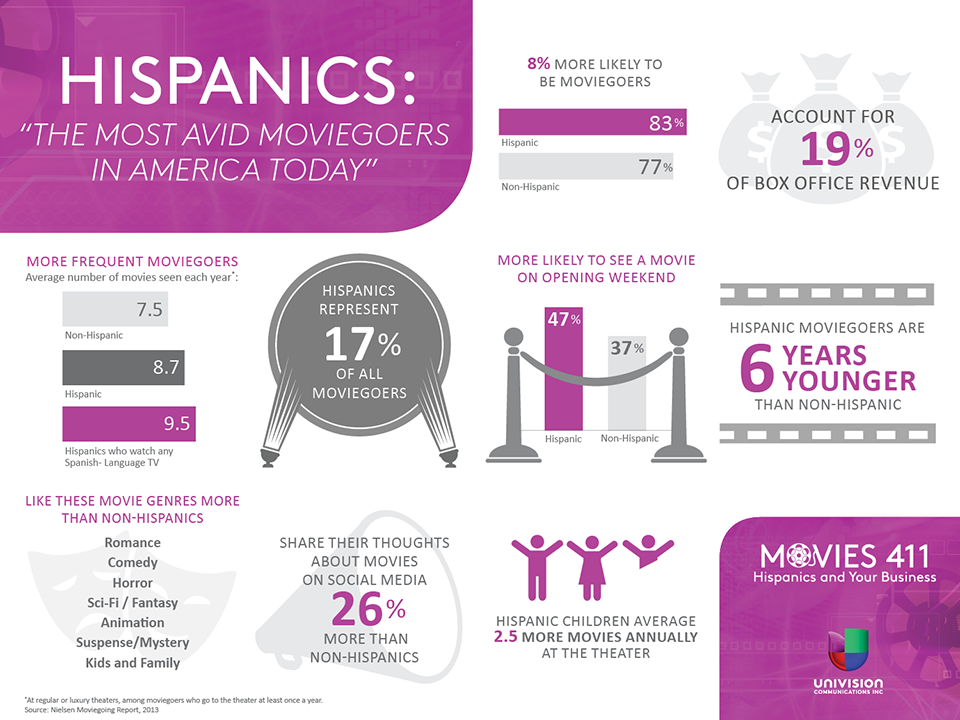 What do Guardians of the Galaxy, 22 Jump Street, and Noah have in common?

Not genre, not studio, not talent-and while all three films have earned more than $120 million at the box office, that's not it either.

Movies in the action-adventure and comedy genres have long been most popular among Hispanics, but new trends appear to be taking shape. The drama category (featuring films like Noah) is down 9 percent among non-Hispanic attendees but up dramatically-15 percent-among Hispanic moviegoers. Let's even consider romantic comedies, a struggling category that hasn't seen a film cross the $100 million threshold in domestic box office in three years. Non-Hispanic audiences are down 19 percent since 2009, while Hispanic audiences are up a healthy 12 percent. In fact, Hispanic audiences have grown in the sci-fi, family, and horror categories, too-every genre tracked by Hollywood.

This phenomenon is due in large part to the fact that Hispanics are much more likely than non-Hispanics to see movies as a family or group. Anecdotally, Hispanics tell us that going to the movie theater is a pastime in itself-a social experience to be shared by friends and family. Part of the fun is debating movie choices and deciding what to see after they have arrived at the theater.

Hispanics are more likely to go to the movies than the general population (83 percent vs. 77 percent). In fact, Hispanics make up 15 percent of the U.S. population aged 12 and older but buy 19 percent of the movie tickets among this demographic. Do the math and it's clear: appealing to Hispanic audiences is key to increasing box office revenues.

Opening weekend buzz can often set word-of-mouth in action to either make or break a film and its box office fortunes. Hispanics make an enormous impact in that measure as well, with 47 percent of Hispanic moviegoers usually going to see a film on its opening weekend, something only 37 percent of non-Hispanics do.

Hispanics also demand a more integrated entertainment experience than the general population. While only 72 percent of all adults use social media, 80 percent of Hispanics do. Additionally, the number of Hispanics who use social media has increased from 18.9 million in 2010 to 28.7 million in 2014, a 52 percent increase. Put simply: Hispanics are more likely to share their opinions about movies, another factor that will drive box office revenues.

Hispanics' importance at the box office will continue to grow over the coming years. While the U.S. Hispanic population has grown sixfold since Patton and Love Story (1970) were box office hits, and Hispanics represent more than half of the overall growth in the U.S. population since Gladiator (2000) ruled the screen, the current population of Hispanics (approximately 56 million) will more than double to 128.8 million by 2060.

At Univision's panel in June at the "Produced By" Conference, National Association of Theatre Owners President John Fithian said, "Hispanics love the same movies as others ... just a little more."

That statement is very true, but Hollywood must honor this fact. According to a study last year by the University of Southern California's Annenberg School for Communication and Journalism, Hispanics filled just 4.9 percent of the 3,942 speaking roles in the top 100 films from 2013-the same percentage they held five years earlier. The study concluded, "Hispanics clearly are the most underserved racial/ethnic group" in the film industry.

For the love story between Hispanics and movies to continue along its current happy path, Hollywood needs to change that plot.

Pete Filiaci is a vice president in Univision's Strategy and Insights Group, a dedicated consulting team of veterans from media, marketing, and agency backgrounds who help marketers develop and execute their strategies to drive sales with Hispanics. A cornerstone of their approach is helping companies evolve from treating Hispanic as a niche to deploying a "total market strategy," where Hispanic is integrated into all phases of the business planning process. Filiaci has 20 years of experience in the media industry. He has been with Univision since 1998.