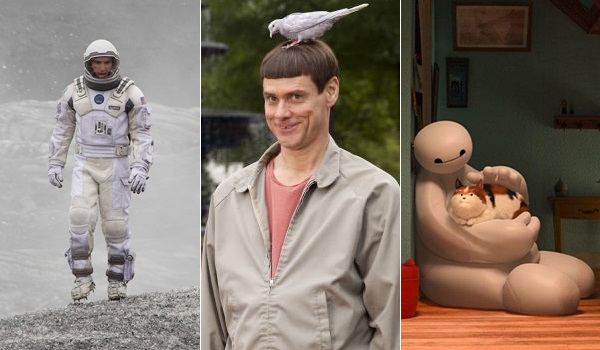 Paramount's Interstellar grossed $1.81 million on Thursday to lead the daily box office one last time. The high-profile Christopher Nolan directed sci-fi film was down a solid 10 percent from Wednesday and down 46 percent from last Thursday. It should be noted that daily percentage declines were significant for most wide releases yesterday, due in large part to Lionsgate's The Hunger Games: Mockingjay - Part 1 entering the marketplace on Thursday evening. Interstellar took third place for the week with a weekly haul of $36.97 million. That represented a 44 percent decline from the film's opening week performance and brings the film's domestic total to $105.59 million after 14 days of wide release.

Universal's Dumb and Dumber To held steady in second with $1.44 million. The long awaited comedy sequel starring Jim Carrey and Jeff Daniels was down 12 percent from Wednesday. While it has shown early signs of front-loading throughout the midweek, Dumb and Dumber To was still the week's top film with a very solid seven-day start of $43.65 million. That was slightly ahead of pre-release expectations and places the film 5 percent ahead of the $41.56 million seven-day start of last year's Jackass Presents: Bad Grandpa.

Disney's Big Hero 6 took in $1.15 million to remain in third place. The 3D computer animated film from Walt Disney Animation Studios was down just 1 percent from Wednesday, which represented one of the day's better daily percentage holds among wide releases. The film fell 39 percent from last Thursday. Big Hero 6 claimed second place for the week with $39.98 million. That was down 47 percent from the film's opening week performance and brings the film's two-week total to $115.62 million. Big Hero 6 is currently running 12 percent ahead of the $103.17 million 14-day take of 2012's Wreck-It Ralph.

Beyond the Lights rounded out its first week of release with a seventh place take of $0.256 million. The low-budget drama from Relativity was down 10 percent from Wednesday's performance. Beyond the Lights took fourth place for the week with a modest seven-day start of $7.49 million. That was below expectations and was 20 percent below the recent $9.37 million seven-day start of Addicted.

Tags: north-america, Beyond the Lights, Big Hero 6, Dumb and Dumber To, Interstellar