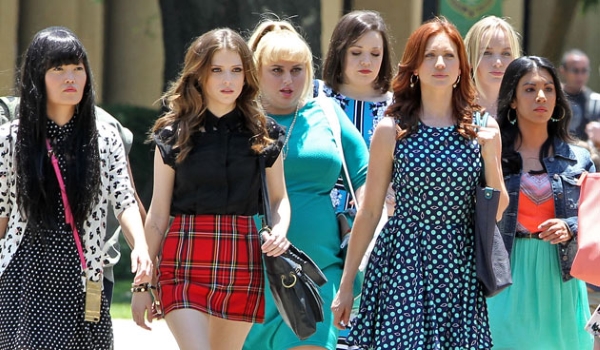 Pitch Perfect 2 had the biggest trailer of the past week with over 87,000 tweets last Thursday and has seen more than 300k new likes on Facebook over the same period. The first film was a huge hit on social media and it appears as though the second won't miss a beat.

Jurassic World had a 22 second teaser trailer debut a few days ago and has had users on Twitter especially going bananas over the upcoming footage. It was third on tweets overall in the past week for upcoming films, with promise of much more once the new full trailer drops. Facebook reactions have been more tempered as it has only seen a 100k like increase since the teaser debuted. Chris Pratt can do no wrong it seems and is a long way removed from his days as a supporting star in 'Everwood'.

Though no trailer has been released yet, its worth noting that just the promise of the first footage of Star Wars: The Force Awakens has seen it pop up to the top of the Twitter charts over the last few days. The marketing around the new footage has been pretty spectacular with a release in only 30 theater in North America planned initially. Limited supply has driven huge demand and the move appears to be paying big dividends in online buzz.

Cinderella dropped its first full trailer as well to a more muted 11,625 tweets. Its Facebook like totals have not seen much of an increase either, though with over 12 million likes to start it already had its hands around much of its target audience no doubt.

The Age Of Adaline had a tough time drumming up much buzz with its first full trailer, grabbing just 2,387 tweets. Facebook was in a similar boat and so far the official page for the film has just 2,993 likes. Expectations here are clearly not huge given the reported modest budget and April release date but I could see this as being a film buzz gets behind as it gets closer because of the unusual premise and romantic appeal which should reach out to the power users of social media (aka young women). Second trailers normally have a sharp decrease in buzz from the first trailer but I could see this as being the opposite if my suspiscions are proven right. Time will tell (oh yes I had to end with a timetravel pun!).

George Lucas' Strange Magic debuted its first trailer last week also where it saw 2,449 tweets and a handful of Facebook likes (it is at under 2k likes so far over the last week). Animated family films generally don't post huge numbers for their trailer, especially for original films such as this but given the Lucas name here I thought that it would have drummed up some more buzz. Its a bit late for the marketing campaign to be kicking off since its being released less than two months from now, especially when Paddington (which opens the week before) has been promoted ad naseum over the last 4+ weeks. Speaking of which, the first Paddington trailer tipped the scales at a shade over 3,000 tweets in October.

Not like we needed further confirmation but the dismal performance of the latest Seventh Son trailer could very well be the final nail in its coffin. The new trailer barely snuck by 1,000 tweets and added fewer than 3k likes to its Facebook tally. The film just can not buy buzz online despite its best efforts. This latest trailer has been the most action-packed and impressive visually but social media barely paid it any attention. Bad news for the oft-delayed film as it stands ready to join the Jeff Bridges flop graveyard alongside R.I.P.D and The Giver.

The Age Of Adaline