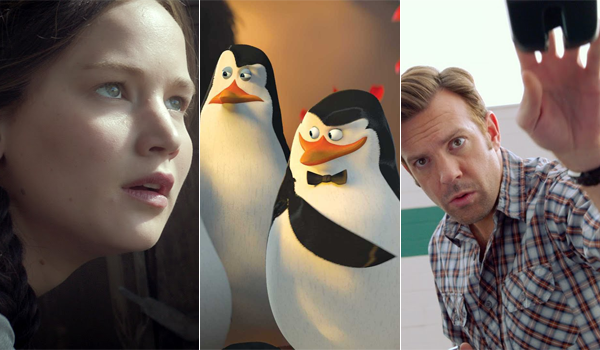 LOS ANGELES - November 25, 2014 - According to Fandango, the nation's leading moviegoer destination, fans continue to flock to "The Hunger Games: Mockingjay - Part 1," which amassed a high-flying 90 out of 100 points on the company's Fanticipation movie buzz indicator, and ranks as this weekend's top advance ticket-seller. Thanksgiving openers are looking solid, with "Penguins of Madagascar" and "Horrible Bosses 2," scoring 87 and 84 points, respectively.

"Penguins" is outselling "The Croods" and "Cloudy with a Chance of Meatballs 2," while "Horrible Bosses 2" is outpacing "Horrible Bosses" and "We're the Millers" at the same point in those films' sales cycles.

According to a survey of more than 1,000 "Penguins" ticket-buyers on Fandango:
· 85% have seen all three previous "Madagascar" films with their kids;

· 83% plan to see the movie as part of a Thanksgiving weekend family outing;

· 65% claim Benedict Cumberbatch and John Malkovich in the voice cast made them more excited to see the movie.

"For the new releases this holiday weekend, adult audiences will eat up the raucous, fast-paced comedy ‘Horrible Bosses 2,' featuring Oscar winner Christoph Waltz as a villain you love to hate, while families with young children will be thankful for the lighthearted laughs, non-stop action and positive themes in the animated adventure ‘Penguins,' co-starring Benedict Cumberbatch as the grey wolf leader," says Fandango Chief Correspondent Dave Karger. "In limited release, Cumberbatch fans will want to check out his award-worthy performance in ‘The Imitation Game,' one of the year's very best pictures."

On Fandango's weekly movie recommendation show, "Weekend Ticket," Karger breaks down the new releases and catches up with "Horrible Bosses 2" stars Jason Bateman, Jason Sudeikis and Charlie Day. When asked to describe why "Bosses" makes sense as a Thanksgiving movie, Sudeikis playfully points out that "laughing burns calories!" The full episode can be viewed at http://www.fandango.com/WeekendTicket.