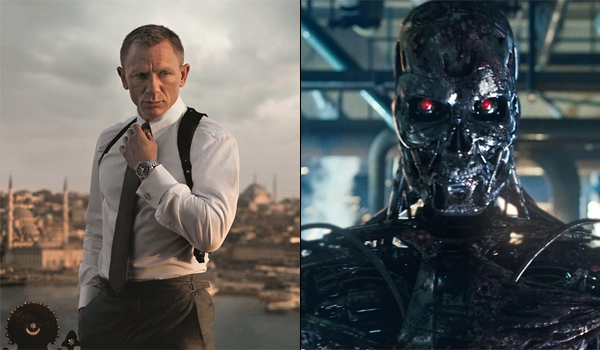 Thursday brought two major news bits out of franchise cinema: the official title and cast announcements for the next James Bond flick, and the awaited first trailer for Terminator Genisys. What's the early response to each?

After much speculation, director Sam Mendes and company officially announced the title of the 24th Bond film (Daniel Craig's fourth), set for release on November 6, 2015 when it will kick off the holiday movie season.

As a title alone, Spectre is amping up anticipation for fans of the series who recall the titular organization's significance in the early Sean Connery films. Adding to the excitement is the confirmation of two-time Oscar-winner Christoph Waltz taking on a role, as well as Andrew Scott (Sherlock's Moriarty), Léa Seydoux (Mission: Impossible - Ghost Protocol), Monica Bellucci (The Matrix Reloaded), and Dave Bautista (Guardians of the Galaxy).

With Ralph Fiennes taking over Dame Judi Dench's role as M, Naomie Harris' Eve Moneypenny, and Ben Whishaw's Q all returning, Spectre is poised to continue where Skyfall left off as a reinvented Bond chapter that still aims to honor what fans have come to love about the series over the last 52 years. Mendes' behind-the-camera team only adds to the encouragement for cinephiles.

Skyfall set new critical and commercial benchmarks for the franchise two years ago. Aside from having a decent shot at landing around the best Bond opening over (Skyfall's $88.4 million), Spectre will have its work cut out for it. It's almost unfair to compare the last film's $304 million domestic/$1.1 billion global run to Spectre since the latter won't have the marketing synergy of the franchise's 50th anniversary to drive it. Still, after Skyfall and the product Mendes, Craig, and the lot put up on screen in 2012, all bets are off.

Let's be honest: the Terminator franchise has stumbled since James Cameron left it behind 23 years ago. 2003's Rise of the Machines ($150 million domestic/$433 million global) fell from the blockbuster status of T2: Judgment Day, while 2009's Terminator Salvation continued the decline with a weak $125 million domestic/$371 global run. When that happens these days, studios think "reboot"--and that's exactly what Paramount is doing since acquiring the brand rights a few years back.

Now, fans have received their first taste of what said reboot--featuring Arnold Schwarzenegger's return--will be like. Early reactions are, unfortunately, mixed. The crux of the debate centers around the film's aim to redo the entire timeline of the first four films (not unlike what X-Men: Days of Future Past and 2009's Star Trek accomplished). Some fans aren't convinced the motives for such a move are entirely organic to the story's needs; or if they are, there's fear that the execution simply may not work.

Still, the "wait and see" approach is recommended. Sarah Clarke's (Game of Thrones) takeover of the Sarah Connor role isn't just a potentially perfect fit for her, but timely given the rising demand for female-centric action flicks. Plus, as we've seen in the past, one trailer doesn't always give the most accurate impression of a movie.

Following two poorly received predecessors and fighting a bout of serious franchise fatigue won't help Genisys' prospects at the box office early on, so the film's ultimate hope rests in what needs to be a very good movie. Otherwise, instead of the planned trilogy of new films, this could be the straw that breaks the franchise's back.

Terminator: Genisys opens July 1, 2015. Check out the trailer below.