Christmas Preview: 'Unbroken', 'Into the Woods', & 'The Interview' Set for Competitive Holiday 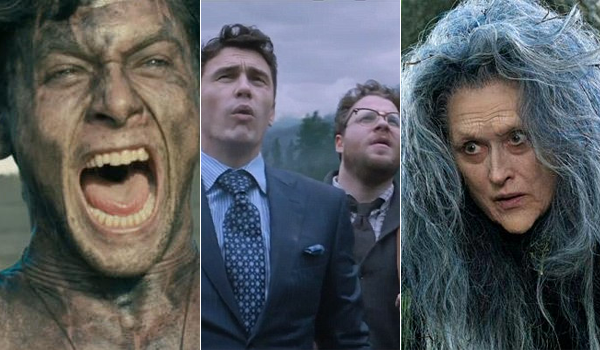 Angelina Jolie's third directorial effort, Unbroken, may quietly be emerging as the Christmas release to beat.

Following their nationwide debuts on Christmas Day, the weekend of Friday, December 26 will see three new flicks vying for very different audiences. Disney's Into the Woods is building strong social media activity thanks to the studio's brand name and an all-star cast that includes Meryl Streep and Johnny Depp, while Sony's The Interview hopes to land audiences seeking a laugh over the holiday season's end. Meanwhile, the original Seth Rogen-James Franco comedy has been at the epicenter of news surrounding the recent hack into Sony's network infrastructure.

The bright side for Sony: their pic is getting a lot of free publicity.

Unbroken, though, may have a box office edge come December 25. The inspirational drama is targeting adult crowds in a market that will be packed with family and kiddie fare. Such strategies have worked well for the likes of War Horse ($80 million domestic), The Fighter ($94 million), The King's Speech ($139 million), Les Miserables ($149 million), et al. Unfortunately, early reviews don't suggest Unbroken will be a major awards contender. Aside from lacking bankable on-screen actors, that may be the film's only tangible disadvantage right now.

Even weeks out from release, Unbroken has already amassed more Facebook fans than Lone Survivor and Monuments Men did before their debuts. For a bit of marital rivalry, Jolie's first mainstream behind-the-camera project has been frequently posting four times more Twitter activity than hubby Brad Pitt's Fury generated before release.

In a tight market where audiences are conserving their money for the "right" movie, Christmas weekend is shaping up to be a competitive one. The Hobbit finale will be enjoying what should be a big second weekend, while Fox's Night at the Museum: Secret of the Tomb and Sony's Annie remake will also be in their sophomore frames.

The Into the Woods trailer: