#OneLastTime: A Throwback Thursday Tribute to the Middle-earth Saga of 'The Lord of the Rings' & 'The Hobbit' 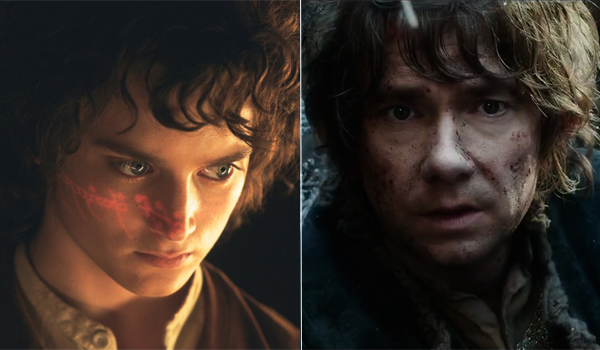 It may be easy to forget at the moment, but other movies are still coming out for the holidays.

This week sees the anticipated release of The Hobbit: The Battle of the Five Armies, marking the final cinematic journey filmmaker Peter Jackson will take into Middle-earth (unless J.R.R. Tolkien's estate eases up on rights to other published materials, anyway).

Through the director's shepherding of the fantasy adaptations-turned-phenomenons, Jackson has overseen a series of movies that leave no small footnote in box office history.

On December 19, 2001 -- when The Fellowship of the Ring opened in cinemas --  if you looked at the top of the all-time box office chart, the lone movie series to consistently rank near the top was Star Wars (all of its then-four movies ranked in the top eleven). Plenty of eventual franchises (Jurassic Park, Shrek, Jaws, Raiders of the Lost Ark, et al.) were represented by their original movies, but the only non-Star Wars sequel to rank in the top 25 at the time was Toy Story 2.

Flash forward to today. Another glance at the current all-time chart reveals a massive pile of franchise titles. Sequels, prequels, finales... you name it. Only five movies in the current top 25 can claim to have no theatrical successors (Titanic, E.T., The Lion King, Frozen, and The Passion of the Christ).

From Christopher Nolan's Dark Knight chapters to Marvel's The Avengers; from The Hunger Games and Pirates of the Caribbean to Transformers and Spider-Man. The modern trend of franchises overshadowing the box office landscape can be traced back to 2001, when The Lord of the Rings (and Harry Potter alongside it) changed the game for both the fantasy genre and, in some respects, the Hollywood blueprint for blockbuster success.

Impressively, Fellowship, The Two Towers, and The Return of the King all finished among the top two domestic grossers for three consecutive years (the latter finale leading 2003 outright). Ditto for the global charts, but with Towers also topping 2002's moneymaker list. As one of the early pieces of escapism to move and entertain patrons mere months after September 11, Jackson's Rings trilogy resonated with a global audience, strengthening the popularity and influence of Tolkien's literary masterpiece.

Arguably, the three films set a modern standard: for the first time in decades, the philosophy of "the trilogy" was widely embraced (sorry, Matrix fans). A generation of young movie lovers got "its Star Wars."

The Rings films didn't invent the notion of cinematic world-building, but they certainly championed it by honoring the spirit of the Middle-earth tales Tolkien spent much of his life developing and refining. Audiences found their gateway for taking fantasy stories seriously, many discovered Tolkien's works for the first time, New Zealand's tourism industry boomed... you know the story.

Rings was also a pioneer of online movie marketing, giving fans their unprecedented first taste of the movies during pre-production via the film's official website -- a strategy which every high profile pic has since adopted.

Naturally, once old school fantasy had its day, the world opened up to a variety of modern myths that extended -- by design -- beyond just one movie. As quantity of product skyrocketed, the proverbial "good with the bad" meant some stinkers would follow (and in someone's opinion, they always do). Still, even the big franchise hits with less-than-unanimous praise have bonded legions of dedicated fans in support of their beloved characters and stories. Occasionally, a true gem of a movie (or fellow hit fantasy, Game of Thrones) emerges.

After years of begging from fans, not to mention numerous legal entanglements, The Hobbit landed in Jackson's hands. In retrospect, Rings was always going to be an impossible act to follow, but the Hobbit flicks have a crowd of supporters all their own. A combined $1.98 billion between the first two films, even in the era of 3D prices and overseas expansion, is nothing to sneeze at.

While certainly more divisive than its predecessors, The Hobbit has only added to the number of cherished movie memories fans have made in the thirteen-plus years since The Lord of the Rings began this journey. Regardless of one's opinion toward the new trilogy, that's the kind of moviegoing spirit that should be celebrated -- you guessed it -- one last time.

The Hobbit: The Battle of the Five Armies trailer: