NORTH AMERICA: 'Exodus: Gods and Kings' Continues to Rule on Monday with $1.97M 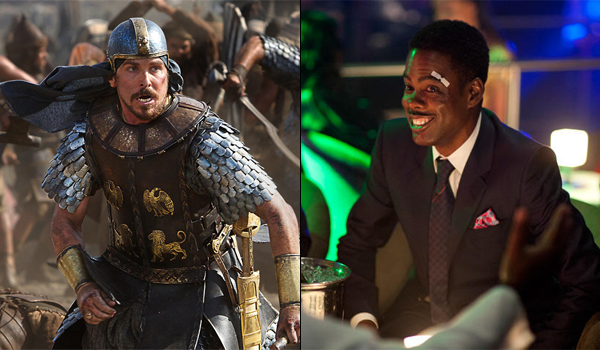 Fox's Exodus: Gods and Kings took in $1.97 million on Monday to lead the daily box office for a fourth consecutive day. The pricey Ridley Scott directed biblical epic starring Christian Bale fell 67 percent from Sunday. Exodus: Gods and Kings is performing on the low end of expectations, but is off to a lackluster start nonetheless, especially with its price tag and likely front-loading in mind. The film has grossed $26.09 million in four days. That places Exodus: Gods and Kings 4 percent behind the $27.07 million four-day start of the much less expensive Son of God earlier this year.

The Hunger Games: Mockingjay - Part 1 placed in second on Monday with $1.11 million. The third installment of Lionsgate's blockbuster franchise fell 65 percent from Sunday and a healthy 23 percent from last Monday. Mockingjay - Part 1 has grossed $277.99 million through 25 days of release. That makes the film the second highest grossing release of 2014 thus far domestically and places it 22.5 percent behind the $358.82 million 25-day take of last year's The Hunger Games: Catching Fire.

Paramount's Interstellar took third place on Monday with $0.523 million. The Christopher Nolan directed sci-fi film was down 65 percent from Sunday and down only 19.5 percent from last Monday. While Interstellar has been holding up nicely as of late, the film is likely to take a big hit this week from losing IMAX screens to Warner's The Hobbit: The Battle of the Five Armies. Interstellar has grossed $167.28 million after 39 days of wide release.

Fellow Paramount release Top Five followed very closely behind in fourth with $0.518 million. The critically acclaimed comedy starring and directed by Chris Rock was down 66 percent from Sunday. Top Five is performing towards the low end of expectations with a four-day start of $7.41 million. The film will hope to see its strong critical reviews transfer into strong word of mouth going forward. Paramount will be expanding the film into additional locations over the next two weeks.