Global Alert: Girls Are Nowhere to Be Scene - A Look at the Underrepresentation of Women in Cinema

Women are underrepresented in movies, as well as in leadership positions at organizations that produce, distribute, and exhibit movies. Through her work at the Geena Davis Institute on Gender in Media, Geena Davis is shining a light on gender imbalance in entertainment. Many readers will recall the Academy Award winner's powerful presentation at CinemaCon 2013, in which the she described and quantified the degree to which women and girls are underrepresented and misrepresented in Hollywood movies targeted to children ages 11 and under. Crowd scenes in movies rated G, PG, and PG-13, for example, averaged female representation of only 17 percent, sending the message that women and girls don't take up as much space as men and boys. The Geena Davis Institute's research suggests that the percentage of speaking female characters in top-grossing movies has not meaningfully changed in roughly 50 years. Further, women and girls are often stereotyped and sexualized when they are depicted in popular content.

Now, as Hollywood is embracing new audiences and opportunities in international markets, the Geena Davis Institute has conducted new research that explores whether the underrepresentation and misrepresentation of women and girls in entertainment is an American phenomenon or if it extends beyond U.S. borders. The institute partnered with the University of Southern California's Annenberg School for Communication and Journalism to explore the visibility and the nature of female depictions in films worldwide. The result was "Gender Bias Without Borders," a study that analyzes female character representation and portrayals in popular films across the 10 most profitable theatrical territories internationally-Australia, Brazil, China, France, Germany, India, Japan, Russia, South Korea, and the United Kingdom-and compares them to the United States. The quantitative study looked at films released between January 1, 2010, and May 1, 2013, with a rating "roughly equivalent" to the MPAA rating of G, PG, or PG-13 and examined key data points including gender representation, portrayals, attributes, sexuality, and careers.

A total of 5,799 speaking or named characters in the sample were evaluated for gender representation and found to be 69.1 percent male and 30.9 percent female, a gender ratio of 2.24 males to every one female. The imbalance was heightened in some genres. Action-adventure films depicted significantly fewer females (23 percent) in comparison to the average (30.9 percent), whereas comedy (32.8 percent), drama (34.2 percent), and animated (29.3 percent) movies were closer to the average.

The study found that the gender of the director and writer was related to the onscreen portrayal of girls and women. Films with a female director attached had 6.8 percent more females on screen than those without a female director. Historically, women have been underrepresented in the role of director. There have been notable exceptions, of course. Extraordinary women like Ida Lupino, Penny Marshall, Barbra Streisand, Jane Campion, Sofia Coppola, Betty Thomas, Nora Ephron, Kathryn Bigelow, and Diablo Cody have been successful despite Hollywood's tendency to restrict the range given to female directors. The underrepresentation of female writers, producers, and directors was examined in the recent study. Out of a total of 1,452 filmmakers in the study, 20.5 percent were female and 79.5 percent were male. This translates into a gender ratio behind the camera of 3.9 males to every one female. Women comprised 7 percent of directors, 19.7 percent of writers, and 22.7 percent of producers across the sample, as this country-by-country breakdown illustrates: 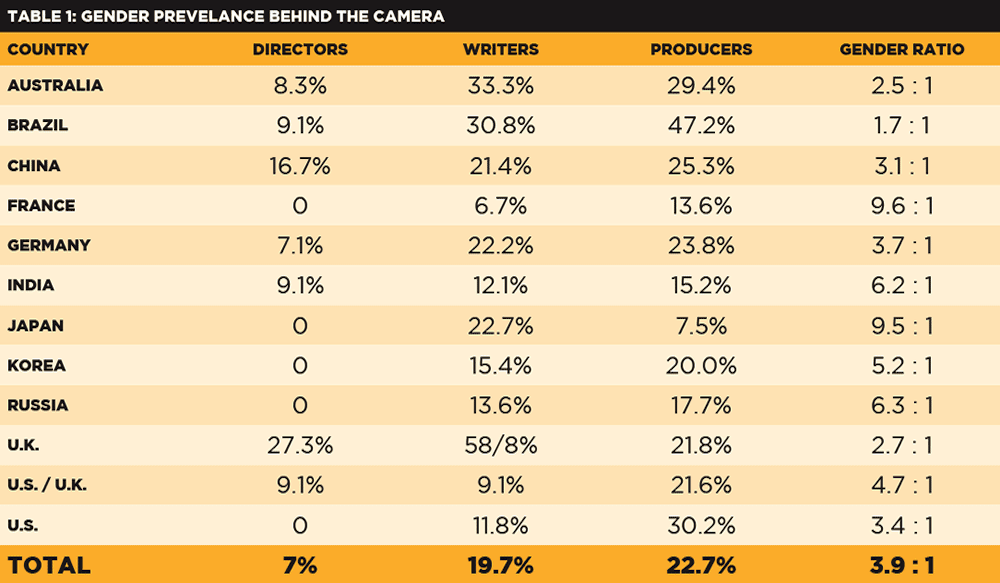 The study looked not only at prevalence, but also at the portrayal of women and girls. It examined the way in which characters were depicted, with special attention to the demographics, stereotypes, and occupations of the speaking characters. Male characters held disproportionately more positions of power than their female counterparts in the 120 movies in the sample. Few female characters filled executive positions in the C-suite. Of the 79 executives shown across the sample, only 13.9 percent were female. Female characters in academics, sports, and religion faced a similar struggle, as this chart illustrates:

There is reason to believe that onscreen gender balance and gender depiction are improving. There have been several movies in the past few years that have included notably nonstereotyped depictions of girls and women-Brave, The Fault in Our Stars, Frozen, Gravity, The Hunger Games, Maleficent, and others. Perhaps a trend toward serious and diverse roles for women has begun. At the same time, more women are producing, writing, and directing. It was inspiring to see Angelina Jolie, for example, stand before the audience at CinemaCon 2014, not as a glamorous movie star, but as a producer and director speaking with great passion about her project, Unbroken.

This fall, Geena Davis and her colleagues convened decision makers interested in the empowerment of women and girls at symposia held in New York, Washington, D.C., and Los Angeles. John Fithian and I had the opportunity to attend the Washington, D.C., event titled, "Second Symposium on Gender in the Media." The program featured keynote remarks by Davis, a presentation of the "Gender Bias Without Borders" research results by Stacy Smith of the USC Annenberg School, and a panel of thought leaders discussing, "Stories from Around the World: Empowering Women and Girls Through Film." Elizabeth Frank, chief content and programming officer, AMC Theatres, participated in the panel that discussed the impact of global film on women and girls, as well as best practices to drive change.

The presentations that afternoon led to the undeniable conclusion that gender inequality is rampant in global films. Not one country is anywhere near representing the reality that girls and women comprise fully half of humanity. Half. Not 30.9 percent. Half. It is critical that exhibition and distribution, with a customer base that is at least half female, address this imbalance. One might ask, but what can I do?

Content creators can do a lot to affect change, and many are stepping up to the plate. Davis reported that 68 percent of the entertainment-industry executives familiar with the message said they had used the institute's research in two or more projects, and 41percent had used the findings in three or more projects. When asked what they had changed, over 25 percent had changed the aspirations or occupations of female characters or their dialogue. "If she can see it, she can be it," one of the institute's key messages, is taking root. Davis makes the point that, while gender equality in "the real world" will take years to achieve, underrepresentation of girls and women on screen can be fixed immediately. "In the time it takes to make a movie, we can change what the future looks like," she said. "There are woefully few women CEOs in the world, but there can immediately be lots of them in films."

It's not only content creators who can positively affect change. Leaders in all segments of the industry can be advocates for gender equality. Exhibitors can be aware of gender balance when making decisions about what content to play on their screens. Choose to show gender-balanced films on your screens. Exhibitors and distributors can create and maintain inclusive workplaces. Choose inclusiveness. Research suggests that gender balance is directly related to good decision making. Diverse inputs from individuals with different backgrounds result in better outcomes. Inclusiveness is not only the right thing to do; it's the smart thing to do. Engage women and men as advocates for change. To hear a compelling argument, listen to Emma Watson's speech before the United Nations as part of the HeForShe campaign.

Senator Amy Klobuchar from my home state of Minnesota recently shared some advice she was given regarding how to best advocate for gender equality: "Speak softly and carry a big statistic." She rejected the "speak softly" part, noting her preference to speak with passion, but she agreed wholeheartedly with the importance of having solid data. The Geena Davis Institute provides an abundance of entertainment industry-specific data to support the message. Read the research findings. The institute's website is aptly named www.seejane.org. Think about the data and incorporate it in your decision making.

NATO celebrated Nikki Rocco this fall at NATO's advisory board meeting as she prepares to step down as president of domestic distribution at Universal Pictures after 47 years at the studio. Rocco was the first woman to be named, in 1996, to head a major studio's theatrical distribution operations. Thank you, Nikki Rocco, for providing women throughout the industry with a most positive representation of female executive leadership. "If they can see it, they can be it."