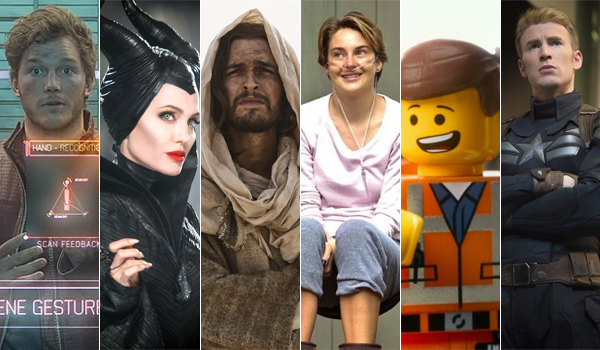 The calendar's resetting once again, and 2014's domestic box office haul will land just north of $10.3 billion -- down an estimated 5 percent from last year's record $10.9 billion. December is projected to finish around $890 million, 15 percent off last year's final month.

The LEGO Movie, Captain America: The Winter Soldier, hand a handful of other titles helped 2014 best three of 2013's first four months. Unfortunately, May, June, and July combined for the weakest three months of summer since 2006. That set the stage for the first billion-dollar August ($1.02 billion, to be exact) -- driven largely by smash hits Guardians of the Galaxy and Teenage Mutant Ninja Turtles. Two months later, Gone Girl and The Equalizer's post-opening run helped form the best October on record ($758.3 million).

For a summary of 2014 box office stats, be sure to follow this page as it's updated over the coming days.

In all, since North American grosses began routinely eclipsing the $10 billion annual threshold in 2009, this past year will rank only ahead of 2011's $10.2 billion. It's easy to look back and point out the critical or commercial failures of any year, but we see no sense in pounding that drum any louder than necessary. Below are six glass-half-full takeaways from the year that was.

As commonplace as they are to the movie business, we still wince with caution at the announcement of sequels, prequels, and reboots. That's a wise approach to maintain, but 2014 proved art can still take precedence over -- or hold reasonable balance with -- financial motive. For just a few examples: Winter Soldier, X-Men: Days of Future Past, Dawn of the Planet of the Apes, 22 Jump Street, and How to Train Your Dragon 2 were each met with strong praise from both critics and audiences alike.

2013 became somewhat notorious for its wealth of big-budget flops. Thankfully, that trend receded a bit this year.

On the other side of the coin, this marked just the second time since 2007 that no movie hit (or even came near) the $400 million domestic benchmark. In fact, Guardians' $333 million is the lowest to claim the yearly crown since 2001's Harry Potter and the Sorcerer's Stone won its year with $318 million.

That doesn't diminish the success of Guardians or other films, though. Markets inherently move up and down. After 2013's record summer and holiday performances, moviegoers decided to act more frugally in 2014. That's why, despite falling short of their predecessors' juggernaut runs, pics like The Hunger Games: Mockingjay - Part 1 and The Hobbit: The Battle of the Five Armies can only be viewed as resounding successes. There just weren't enough "event" films to truly live up to their moniker over the past twelve months.

Faith-based films were a major box office story this year. While Noah ($101 million) will finish as the top-grosser of the bunch, it also stood as the most divisive and controversial. Heaven Is for Real, Son of God, and God's Not Dead (which earned $212 million combined) rang much truer for their audiences and revived a dormant notion: that not-so-subtle Christian themes can find success in theaters. This is clearly an audience not to be overlooked in the future, but one that can also be turned off very quickly when special effects take precedence over the message.

While another studio (which we'll get to shortly) tends to dominate the headlines, 20th Century Fox will claim the biggest market share of any studio in 2014 with over 17 percent of total box office grosses. That's a significant improvement from last year when the studio netted less than 10 percent, merely the sixth-best among the seven major studios.

How'd they do it? Strong scheduling and audience targeting. Son of God brought out faith-based audiences back in February and March, The Other Woman gave girls something worth checking out in early summer, Bryan Singer delivered another hit X-Men sequel of a unique, time-traveling breed, and The Fault in Our Stars reaffirmed -- like Lionsgate's Divergent months before -- the value of young adult adaptations and Shailene Woodley's rising star. Following those standouts, the Apes sequel wowed summer crowds, Let's Be Cops and The Maze Runner stood out during August and September, and of course, Gone Girl hit it big in the fall.

This point has been belabored enough that it's just stating the obvious. Still, let's be honest: entering 2014, Phase Two of the Marvel Cinematic Universe wasn't quite living up to the hype. Iron Man 3 and Thor: The Dark World did very well at the box office in the preceding year, but audiences weren't overly in love with either one.

The game changed with Winter Soldier's April-record $95 million opening, strong reviews, and very positive word of mouth to kick-start the summer a full month early. In an impressive scheduling strategy of their/Disney's own, Marvel book-ended that success when Guardians of the Galaxy set an August record with its $94.3 million opening, generating a bestselling soundtrack, and igniting the kind of rare buzz among fans and casual viewers alike that helped it reach nearly $333 million stateside ($773 million globally).

Not bad for the movie that was supposed to be Marvel Studios' first outright failure, eh?

Disney May Be Even More Unstoppable

They claimed the top two movies worldwide, and two of the top three domestically, one year ago. We've seen Disney's box office dominance coming for awhile now, but their success with "predictable" hits has spilled over to other projects. It's not just Marvel carrying them, nor Pixar (who, for the first time in nine years, didn't release a movie in 2014).

Following the phenom of Frozen, Disney capitalized on its resurgence with family and female moviegoers. With the help of Angelina Jolie's star power, Maleficent became one of the biggest movies of summer. Over the holiday season, Big Hero 6 -- despite a somewhat clunky title -- marked another hit for the Walt Disney Animation Studios, while Into the Woods is currently serving as one of the top choices for holiday patrons and will soon clear $100 million domestically.

On top of all that, Disney, Marvel, Lucasfilm, and co. easily made the biggest impact on social media by way of future releases this year. The trailer for Avengers: Age of Ultron gave fans their first look at the eagerly awaited reunion of Iron Man and the gang taking on a new villain of devilish potential in James Spader's motion-captured hands.

Just when you thought buzz for an upcoming movie couldn't be any louder, the first teaser trailer for Star Wars: The Force Awakens nearly brought the Internet to its knees over Thanksgiving weekend. Widely reported as the most-watched trailer of the year, Episode VII of the Star Wars saga is still one year out from its December 18 release, but Disney isn't wasting any time getting word out for the sequel that many audiences have waited nearly thirty-two years for.

That's it for this 2014 wrap-up, but we're sure to have left some subjects on the cutting room floor. What were some of your takeaways and favorite movie debates from 2014? Will we still be talking about The Interview in thirty years? Is Gareth Edwards' Godzilla criminally underrated? Will Christopher Nolan's Interstellar prove to have been ahead of its time?

Tags: north-america, Guardians of the Galaxy, The Hunger Games: Mockingjay - Part 1, The Hobbit: The Battle of the Five Armies, Into the Woods, Big Hero 6, Captain America: The Winter Soldier, The LEGO Movie, Maleficent, X-Men: Days of Future Past, Dawn of the Planet of the Apes, 22 Jump Street, Teenage Mutant Ninja Turtles, The Other Woman, Son of God, Gone Girl, The Maze Runner, Let's Be Cops, The Equalizer, Divergent, Interstellar, Shailene Woodley, The Fault In Our Stars, The Interview, Godzilla, 20th Century Fox, Marvel, Disney, Pixar, God's Not Dead, Noah, Heaven Is For Real