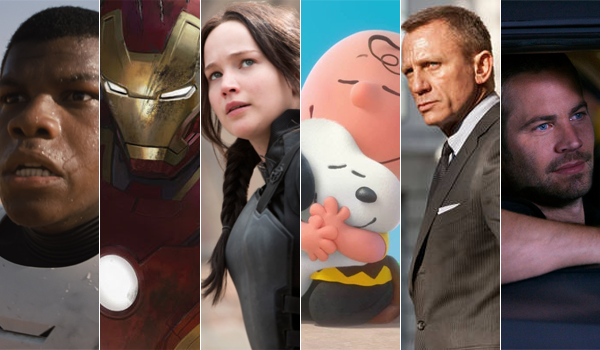 Updated: Our complete 15-film list covering January through December, plus a number of honorable mentions, can be found below and in order of release. The first half of this article was originally published on January 6.

A new year means a fresh slate of movies hitting your local cineplex over the next 12 months. Which ones will be among the hottest conversation starters? In a two-part preview this week, we're breaking down 15 of the most notable movies you'll probably be buzzing about with friends and family in 2015.

Kenneth Branagh (Thor) directs this retelling of the classic fairy tale, featuring veteran cast members Cate Blanchett and Helena Bonham Carter. Early trailers indicate he's helped bring a visual style that complements Disney's aim to rekindle the success they found with Alice in Wonderland, Oz the Great and Powerful, and last year's Maleficent. Disney's been on a hot streak when it comes to attracting female audiences (see also Frozen and Into the Woods), so there's plenty of reason to think Cinderella could fall in line.

Furious 7 would have been a box office juggernaut regardless, but there's no denying that Paul Walker's tragic and untimely passing could add some mystique to what will be his final major role on film. The last two films combined for a whopping $1.42 billion globally between them, and we expect another blockbuster here. The film's first trailer has already been met with positive online reactions, and the ever-expanding cast of notable names (including Jason Statham, Kurt Russell, et al) further ensure this will be one of -- if not the biggest -- event film prior to summer's official start.

Avengers: Age of Ultron
Disney/Marvel
May 1

Speaking of summer's official start, the hugely anticipated sequel to Marvel's The Avengers follows on the heels of Captain America: The Winter Soldier and Guardians of the Galaxy, both of which were critical and commercial smash hits. Led once again by Robert Downey, Jr.'s Iron Man, the entire team returns in Ultron, with the titular villain portrayed (through motion capture) and voiced by the venerable James Spader. It could prove very tough to reach the first Avengers' $624 million/$1.5 billion domestic/global runs, but this is the odds-on favorite to post the biggest opening of the year. Can it top its predecessor's still-reigning record $207 million North American opening? Given Marvel's track record, it's more than possible.

Switching gears, Pitch Perfect 2 will aim to counter-program in the month of May as a summer movie for the ladies. The first film exploded in popularity thanks to great buzz, reviews, and a strong social media presence back in 2012. That pic's popularity has only grown in the post-theatrical market -- a good indicator that its sequel will, at the very least, be a strong performer on opening weekend.

When World opens, it will have been 14 years since we took our last big screen trip to Jurassic Park (not to mention 22 years since the original Steven Spielberg blockbuster). Ordinarily, this is one type of sequel that would (and still could) be subject to franchise fatigue as the fourth installment of a dormant series, but the long break and the completely overhauled cast -- led by leading man-on-the-rise Chris Pratt -- give enough reason to believe there's growing curiosity in what the park and its genetically created inhabitants will look like in 2015. The film's first trailer was a star on Twitter and Facebook following its November debut.

Inside Out & The Good Dinosaur
Disney/Pixar
June 19 & November 25

Barring another scheduling change, 2015 will mark the first time two Pixar films have opened in the same year -- hence, we're combining them as one entry on our list. To the delight of avid Pixar fans, they're both original stories.

Leading off, Inside Out is the first feature from writer/director Pete Docter since 2009's Up. Before that, he helmed the original Monsters, Inc., so his resume alone offers confidence in this project. The first trailers are encouraging, offering up the Pixar-esque humor and clever concept that's helped make some of the studio's movies as beloved as they are.

Later in the year, The Good Dinosaur hits theaters for the holiday season. The film's production history has been shaky to the point of the studio bringing on an additional director to complete the final act of the film. While that may be cause for concern, it's typically wise not to underestimate Pixar. They'll have their work cut out for them, though, as another major animated release contends for family audiences over the holidays. We'll get to that one later this week...

Spin-offs are hit and miss, but the irresistibly adorable yellow folk from the Despicable Me franchise are among the most popular animated characters to grace the big screen in years. Kids love 'em. Parents love 'em. Who doesn't? As a prequel taking place before Gru's adventures ever began, Minions may not quite become the $971 million global smash that Despicable Me 2 was in 2013, but it should almost certainly be one of the summer's busiest movies.

The Marvel Cinematic Universe's twelfth chapter has seen its fair share of pre-production turmoil, but this week's first teaser trailer underlined the fact that Marvel knows their audience. Paul Rudd's Scott Lang promises to bring the studio's trademark humor to a film and character who may prove as challenging to adapt for the big screen as Guardians of the Galaxy was. It's unfair to mention that film or its rare zeitgeist-hitting success in the same breath as any unproven property, but because of Marvel's growing track record as a brand name among casual viewers and fans alike, interest in the final chapter of Phase 2 -- and the first heist film of the MCU -- will certainly be high post-Ultron.

With no official trailer yet available, we're rolling the dice a little bit on this one. Based on the short film (seen below) by French filmmaker Patrick Jean, this Adam Sandler/Kevin James-led pic should find appeal among both kids and adults as the classic video game nostalgia factor comes into play (much like it did for Disney's Wreck-It Ralph). After all, what screams "fun summer movie for everyone" more than Pac-Man, Donkey Kong, and invading aliens? Co-starring Peter Dinklage never hurts, either.

After years of waiting, fans of Charles M. Schulz's iconic Peanuts comic strip (and popular holiday television specials) will finally see Snoopy, Charlie Brown, and co. in full CG animated glory this holiday season. The highly influential comic ran for fifty years before Schulz's retirement, and passing, in 2000. Estimated to have been read by more than 350 million people around the world during that time, multiple generations fell (and still fall) in love with the toon's beloved characters. Schulz's son and grandson are a part of the film's writing team, and the film's initial trailers suggest the comic's uniquely endearing spirit will be felt by all ages come November. Watch out for this one, folks.

In what could be some of the best counter-programming imaginable, Sony is opening the 24th James Bond film against Peanuts -- and following the enormous critical and commercial success of Skyfall, excitement for a Bond sequel can't get much higher. Daniel Craig returns for his fourth outing, double Oscar-winner Christoph Waltz joins as the film's primary villain, and M, Q, and Moneypenny all return from the last film. With the notion of again nodding to (or outright embracing) Bond's classic history in the title itself, Spectre is set to pull big numbers for the franchise again. It'll be no small effort trying to match the perfect synergy Skyfall enjoyed through the franchise's 50th anniversary and Oscar-winning title song from Adele, but returning director Sam Mendes is clearly the man for the job.

The biggest young adult franchise since Harry Potter comes to an end this year. Part 1 may have fallen short of its predecessors' box office runs, but we can expect a "finale bump" when Part 2 storms into theaters and millions of rabid fans pile into midnight shows (sorry, that's "Thursday night shows" nowadays) and cheer on Jennifer Lawrence's Katniss Everdeen one final time. Any other year, this would be a near shoe-in for the biggest box office hit over the next 12 months. Alas, two other movies will vie for that title: the Avengers sequel and our penultimate movie on this list...

It's difficult to overstate the potential of Star Wars' return to the big screen. Expectations, while still slightly in check, are only growing in the wake of the first teaser trailer's release. That trend will probably continue as more previews drop, but the ultimate question is this: will the ten-year gap between Force Awakens and the prequels help or hurt Disney's first foray into a galaxy far, far away? Audiences may have their issues with the prequels, but they still stand as some of the biggest hits of their time. Star Wars has lived on past Revenge of the Sith thanks to two successful TV shows and countless media tie-ins, passing George Lucas' modern myth down to a new generation. Given director J.J. Abrams' success in rebooting Star Trek, among other things, Episode VII of the cinematic saga needs only to deliver a worthy trilogy-starter to -- forgive the pun -- awaken the most enduring franchise of all time.

Tom Cruise's Ethan Hunt is back for more spy games and globetrotting this Christmas. Unfortunately, details outside of casting (Jeremy Renner, Simon Pegg, and Ving Rhames all return) are scant as the film's production has been kept surprisingly quiet -- but that's probably a good thing. The decent four-year interval between M:I5 and the very well-received Ghost Protocol should be enough to have audiences awaiting the franchise's return. In terms of box office, pay no mind to anyone saying Star Wars will crush it -- Sherlock Holmes and Avatar coexisted just fine over the holidays in 2009-2010.

Please note: no official previews for The Hunger Games: Mockingjay - Part 2 or Mission: Impossible 5 have been released.

That wraps it up. 2015 promises to a big year. Disagree with some of our choices? Share your comments and opinions below!