NORTH AMERICA: Weekend Estimates: 'The Battle of the Five Armies' Continues to Lead with $21.91M; 'The Woman in Black 2' Exceeds Expectations with $15.15M Fourth Place Debut 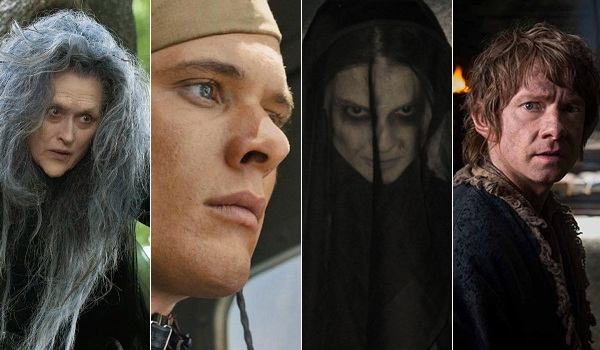 Disney's Into the Woods remained in second place this weekend with an estimated $19.07 million. The modestly budgeted Rob Marshall directed musical featuring Meryl Streep was down 39 percent from last weekend. Into the Woods has grossed a strong $91.21 million in eleven days. That places the film 7 percent ahead of the $85.54 million eleven-day gross of 2008's Bedtime Stories and a slim 1 percent behind the $92.48 million eleven-day take of 2012's Les Misérables. Into the Woods continued to run neck and neck with Universal's Unbroken this weekend and the two films are currently separated by just $3.40 million thus far.

Unbroken placed in third with an estimated $18.4 million. The Angelina Jolie directed war drama was down a respectable 40 percent from last weekend. While Unbroken has shown some relative front-loading thus far, in the bigger picture the film has grossed a significantly stronger than expected $87.81 million in eleven days thanks in part to its very strong Christmas weekend start. Unbroken is running 11 percent ahead of the $79.29 million eleven-day take of 2008's The Curious Case of Benjamin Button and 5 percent behind the $92.45 million eleven-day gross of 2012's Django Unchained.

The Woman in Black 2: Angel of Death debuted in fourth place with a surprisingly strong estimated start of $15.15 million. The PG-13 rated horror sequel from Relativity exceeded expectations, which had been muted in part from soft pre-release online activity heading into the weekend. The film's debut was especially good news for Relativity given that the film was an inexpensive acquisition for the distributor. Early January is historically a good time to release horror films and that certainty was the case for The Woman in Black 2. The film opened 27 percent below the $20.87 million start of 2012's The Woman in Black (a CBS Films release), which was quite respectable given that The Woman in Black 2 doesn't feature Daniel Radcliffe.

Annie placed in sixth with an estimated $11.4 million. Sony's musical remake starring Quvenzhané Wallis, Jamie Foxx and Cameron Diaz also held up nicely this weekend as it fell 31 percent from last weekend. Annie has grossed a very solid $72.63 million in 17 days. That gives the film a current total gross to opening weekend ratio of 4.58 to 1. Annie is running 22 percent behind the 17-day take of the mentioned Alvin and the Chipmunks: Chipwrecked.

The Imitation Game continued to impress in moderate release with an estimated seventh place take of $8.11 million from 754 locations. That gave the awards season hopeful from The Weinstein Company a per-location average of $10,757 for the frame, which easily represented the weekend's strongest location average for films in the top ten. The Imitation Game has grossed $30.78 million to date and appears to be in great shape for a lengthy box office run, especially when considering it was up 2 percent over last weekend without the aid of a major expansion this weekend.

The Hunger Games: Mockingjay - Part 1 finished in eighth with an estimated $7.7 million. The third installment of Lionsgate's blockbuster franchise was down a very healthy 23 percent from last weekend. Mockingjay - Part 1 is currently the second highest grossing release of 2014 domestically with a 45-day take of $323.87 million. That leaves the film just $9.10 million away from the current $332.97 million total gross of Guardians of the Galaxy (through Thursday).

Elsewhere on the platform front, A24's A Most Violent Year was off to a promising start with an estimated $188,000 from four locations in New York and Los Angeles. That gave the awards season hopeful starring Oscar Isaac and Jessica Chastain a per-location average of $47,000 for the frame. The film, which opened on Wednesday, has grossed $300,000 in its first five days of release. A Most Violent Year is scheduled to be expanded throughout January, before receiving a nationwide release on January 30.

Please note that most studios are reporting estimates due to the holidays. Actual results will be reported on Monday, January 5.

All figures reported are domestic only unless otherwise stated.

The Hobbit: The Battle of the Five Armies held onto first place yesterday with an estimated $8.38 million, bringing the finale's domestic total up to $207.23 million. The film crossed the $200 million threshold in 17 days, two days faster than The Desolation of Smaug last year. Five Armies is on track to bring in $22.3 million this weekend in a likely third straight weekend atop the box office.

The Woman In Black 2: Angel of Death debuted to $7.75 million on Friday, not far behind its predecessor's $8.3 million opening day three years ago (which translated to a $20.9 million weekend). It should be noted that the first film opened over Super Bowl weekend, while it's sequel will likely be more front-loaded due to opening after New Year's Day. BoxOffice projects a $16 million weekend for this sequel.

Into the Woods claimed third place yesterday with another $7.46 million. The Disney musical's total now stands at $79.6 million. BoxOffice projects an $18.3 million frame.

Unbroken wasn't far behind in fourth place yesterday with $7.4 million, bringing its total up to $76.8 million. Please note that Universal also revised the film's Thursday gross down from $6.95 million to $6.9 million. BoxOffice projects a $19.6 million weekend.

In fifth place, Night at the Museum: Secret of the Tomb added $5.93 million. The threequel's total now stands at $81.2 million. BoxOffice projects a $15.3 million weekend.

Meanwhile, The Imitation Game continues to perform very well in semi-limited release. The Alan Turing biopic nabbed $2.95 million from 754 locations on Friday, giving it a $3,916 per-theater average. The film's total is now $25.6 million and is expected to bring in around $8.1 million this weekend.

The Gambler added $2.58 million yesterday, giving it $23.84 million in all so far. BoxOffice projects a $6.6 million weekend.

Last but not least, American Sniper continues to roll on in platform release with a strong $234,000 Friday take from 4 locations -- giving it a $58,430 per-theater average. The film has tallied $1.79 million through 9 days of release. BoxOffice projects a weekend close to $645,000.

Tags: The Imitation Game, Into the Woods, Unbroken, The Hobbit: The Battle of Five Armies, The Woman in Black 2: Angel of Death, north-america